NOTE: This article is about the incarnation of Weather Wizard from the Arrowverse. The mainstream version can be found here: Weather Wizard.

Marky Mark (by the Trickster)

Get revenge on Joe for killing his brother

Mark Mardon, known as the Weather Wizard, is a villain and bank robber appearing in the TV show The Flash. He is a supporting antagonist in the first season and a minor antagonist in the second season. He is the older brother of Clyde Mardon, who had weather manipulation powers. Like his brother, Mark also had these powers after surviving a plane wreck caused by a particle accelerator explosion at S.T.A.R. Labs and later returns to seek revenge for his brother's death.

He is portrayed by Liam McIntyr.

Months later after the plane crash and Clyde's death, Mark returns to the city to avenge his younger brother. To find out who killed Clyde, Mark at first goes to a morgue and tortures a coroner using his powers in the form of hailing, asking for the name of the cop who killed his brother. After finding out that it was Joe west who killed Clyde, Mark kills the coroner. When the police heads to the scene, they find the dead body and a still running auto-tape which the coroner used for his autopsy. When the officers listen to the tape they recognize Mardon's voice and hear that he's after Joe to get revenge for his brother.

Mark later attacks Joe and Barry Allen while they are driving. Joe and Barry grow suspicious when, although the weather forecast states that it's a sunny day, it is raining all around them. They turn around to see Mark in the car behind them. Mark then uses his power to create lightning that strikes Joe's car, causing it to explode. Barry, who used his powers to escape with Joe in time, returns with Joe to the precinct, where the Police Commissioner orders Joe to remain at the CCPD. This causes Mark to confront and attack Joe at the police station once again using lightning. During the ensuing struggle, Commissioner Singh is severely injured and almost killed. Joe is saved by the Flash, who absorbs Marks powers with an invention of Star Labs. Realizing that his powers are useless against the device, Mark flees.

Joe and his partner Eddie Thawne eventually find out where Mark's hideout is. Arriving there, they find that Mark is gone. A powerful wind created by Mark then drags Joe out of the building's window. Mark brings Joe to the harbor of Central City where he chains him to a railing. Claiming that Joe is lucky to have only broken his leg in the fall when Mark broke almost every bone when he fell out of the plane, Mark advances onto Joe. Mark claims that he doesn't need his powers to kill Joe. Joe urges him to go on, as " an eye for an eye" seems to be why Mark has captured him. However, Mark claims that he wants so much more than just an eye. He then calls Joe's daughter Iris and tells her to come to the waterfront if she wants her father to stay alive.

Watching Iris and Barry arrive with his binoculars, Mark then turns to Joe and tells him to watch as Mark will destroy the entire city and thereby anything Joe loves in a giant tsunami. Mardon indeed creates the tsunami. However, Barry is able to run fast enough to travel back through time. By doing so, Barry travels a day back, to the moment he was about to arrive at the morgue.

Barry talks to Wells, who tells him to do exactly the same things he did before his time travel as doing anything else could result in the collapse of time. However, Barry decides not to do so. Instead, he runs to the hideout Joe was captured at and finds Mark. He then brings Mardon to Star Labs, where he is imprisoned in a meta-human cell.

During his first night in the Pipeline, Mark grows unhappy at Cisco Ramon's choice of The Goonies for movie night, and he and the other metas vote to instead watch the film Mean Girls. Mark also requests that Cisco places half a bottle of bourbon on his brother's grave on Clyde's birthday.

During the journey, Mardon and Nimbus argue and a fight almost ensues. It's prevented when the truck arrives at the air-place. However, as Snart had previously tampered with the device preventing the metas from using their powers, they soon realize that they can use their powers again. Mardon creates a thunderstorm and the airplane intended to bring the metas to Lian Yu is hit by lightning and crashes. The metas then escape from the truck. While Joe opens fire at the metas, Nimbus becomes gas and attacks Barry, whereas Shawna quickly flees the scene. Bivolo uses his power to force Caitlin to attack Cisco, while Simmons shoots his lasers at everyone moving. While Barry evades Simmons, Mardon strikes him with a lightning bolt. Before Simmons can finish Barry, he is shot in the face and killed by Snart's cryo-gun, as Snart claims that Simmons owed him money. When Bivolo tries to use his powers on Snart, he is stopped by Lisa who aims her gun at his head.

During the Christmas season, Mark Mardon attacks Iron Heights Prison. He frees Leonard Snart who, despite Joe's intentions, was not imprisoned at the meta-human wing. The two then enter the Trickster's special cell and Mardon frees him as well. Mardon's return deeply disturbs Officer Patty Spivot, whose father was killed by Mardon.

Mardon brings Snart and Jesse to an abandoned toy factory. He tells them that he broke them out to kill the Flash, confident in their numbers, different skills, and knowledge of Barry's vicious defeat at Zoom's hands, leading him to believe the Scarlet Speedster is weak and vulnerable. Snart demands to know the plan first, but Mardon refuses to tell, wanting to know whether Snart is in first. Both almost attack each other, but Jesse defuses the situation. Snart (perhaps owing Barry after the latter saved his sister) decides to step out, instead choosing to warn Barry that Mardon and Jesse are coming for him.

Mardon is eventually detected by Team Flash at the Tree Lighting Ceremony at Central City Square. Watching the square from a rooftop, Mardon is confronted by the Flash. Jovially, he asks Barry whether he should kill everyone down there with a hailstorm or with acid rain. Before Barry can apprehend him, Mardon jumps off the building, revealing that his powers allow him to fly. By following him Barry eventually knocks Mardon out of the air right in the center of the square. However, the Trickster, revealed to be disguised as Santa, throws an explosive present to Barry's feet. He reveals that he handed a hundred of these boxes to random children and that Barry has no chance to save everyone. Mardon and Jesse then offer Barry a deal, Barry allows them to kill him gruesomely and in turn they do not blow up the boxes. To save the children, Barry accepts and Mardon swiftly attacks him with hail.

While Mardon tortures Barry, the rest of his team try to find the bombs. After finding one, they strap it to a drone and fly it into a breach. As they are attracted to the bomb, all other bombs fly off as well. After being told that the bombs are gone Barry knocks out Mardon and Jesse. Officer Spivot then arrives and intends to shoot Mardon as revenge for her father, but Barry manages to talk her out of it. Mardon and Jesse are then arrested. 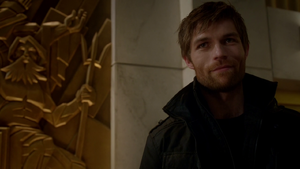 Mark at the police precinct 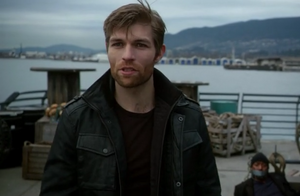 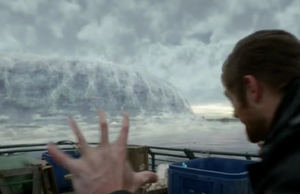 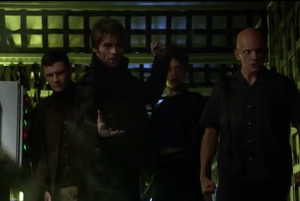 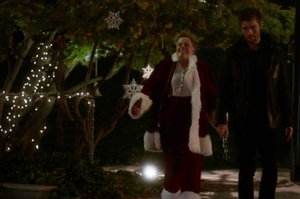 Mardon with the Trickster 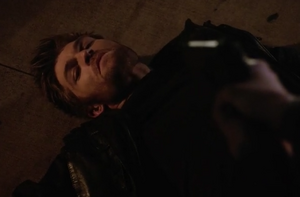