Get revenge on the Nazis (succeeded).

Stalk and kill the protagonist.

Mark Slender is the main antagonist of the cancelled horror game Haunted Memories, a pseudo remake of Slender: The Eight Pages. While he is clearly based on the Slender Man, he is presented as a different take on the entity. He is also given a backstory and reason for his aggression.

The game opens with an unnamed male protagonist, who comes across an abandoned pickup truck outside the fenced off Green Park in Poland. The truck's origins are unknown, but the portfolio the character finds on top of the truck belongs to a Nazi scientific project known as Project: HAUNT. Out of curiosity, the unnamed male ventures into the park to investigate the whereabouts of the organization's members and their discoveries by collecting a set of ten documents and photographs as well as keys to locked off locations within the park's grounds.

Over the course of the game, the character is attacked and hunted by Mark Slender.

In Mark's backstory which is uncovered over the course of the game, Mark Slender was a reporter or journalist of some persuasion for an unknown company. Slender had been sent to a location with several others to report suspicious activity at a power plant out in a forest. Upon arrival and during investigation, Slender and his team were marked for termination, as the power plant had been commissioned by the Nazis for producing an experimental substance.

Slender and co. had discovered this function, as well as the nearby death camp. In order to keep their secrets safe, the Nazis terminated the investigation crew. Slender had managed to escape from the Waffen SS, and hid inside of a bunker. The SS decided it would be easier just to burn him alive, and set the bunker aflame.

Unfortunately, the chemicals inside the bunker caused a bizarre reaction to Slender. And as a result, Slender became a paranormal entity. He then proceeded to attack the facility and could not appear to be stopped. 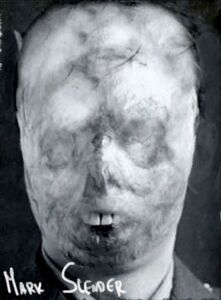