Ruler of Korriban
The Golden Sith

Tremendous strength both physically and in the Force

Return the Sith Empire to its Golden Age (succeeded).

Destroy the Jedi Order and the Republic.
Get resurrected from the dead (both failed).

Ragnos defeated Simus, who was beheaded in the battle with the other aspiring Dark Lord. He then became the Dark Lord of the Sith, and the ruler of the Sith Empire. He lived for at the very least 100 years, ruling the Sith Empire with an iron fist. His Sith Empire had conquered all of the star systems near Korriban under Marka's orders.

In the year 5100 BBY, Ragnos was approached by a 13-year-old Sith Pureblood named Tenebrae. Impressed by the boy's skill in the Force, he took him in as a full member of the Sith Empire and named him Lord Vitiate. Vitiate would later go on to become the Dark Lord himself, reforming the Sith Empire and manipulating galactic affairs for over a thousand years.

After a century of rulership, Ragnos passed away, and the Golden Age of the Sith was near devastated without him. He was buried in the Valley of the Dark Lords along with his predecessors and forefathers

During the Dark Lord's funeral, two Sith Lords named Naga Sadow and Ludo Kressh became arch rivals of each other and battled each other to occupy Ragnos' throne. Their struggle nearly resulted in a civil war that would have torn the Sith apart before they ever even threatened the Jedi and the Republic, which is why Ragnos' spirit appeared before the two and ended their battle and ordered them to band together if the Sith Empire was to remain in balance before returning to his grave. Sadow eventually killed Simus and Kressh and became Ragnos' successor and the new Dark Lord.

Centuries after Naga Sadow's defeat at the hands of the Republic, Lord Ragnos christened and marked Exar Kun and Ulic Qel-Droma as the new Sith Lords through a vision of him in 2 powerful Sith amulets and then dissappeared. The spirit of Marka Ragnos still lived haunting his tomb long past his days.

More than five millenia after Marka Ragnos' death, a Sith cult arose lead by the Dark Jedi Tavion Axmis. Feeling the desperate need of the return of a powerful Dark Lord to rule the Galaxy after the vacuum of power that Darth Sidious' death left behind, the cult called themselves the "Disciples of Ragnos" and sought to revive the ancient Sith by draining power from Force nexuses across the Galaxy and would then be delivered to his tomb where his ghost slumbered to awaken and revive him. Their plans nearly succeeded when the ancient Dark Lord took possession of Aximis' body, but ultimately failed when the Jedi Knight Jaden Korr defeated Ragnos in single combat, forcing his spirit back into slumber. 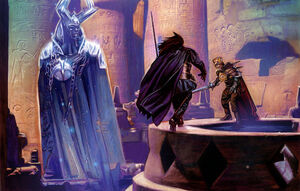 The spirit of Ragnos stops the duel between Sith rivals Ludo Kressh and Naga Sadow. 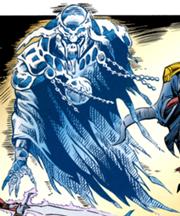