Markkio (Japanese: マルッキオ), or "Banker", which is the name he goes by, is the mysterious evil person who supplies Juan to Ahbmad Saluja, King of Balbadd. Banker and the Weapons/Arms Dealer who provided weapons/arms to the Fog Troupe are the same person. He is a member of Al-Thamen.

He was voiced by Shin'ichirō Miki in the Japanese version of the anime, and by Liam O'Brien in the English version.

Markkio was a member of Al-Thamen and he went to Balbadd on the goal to destabilize it and spread inequality there. Markkio played a role in manipulating the social classes in Balbadd. By working alongside Ahbmad Saluja, Markkio helped to push the inequality in Balbadd and cause problems. When Aladdin, Alibaba, and Morgiana ended up taking down Kassim and get rid of the black ruhk in him, Markkio was eventually caught and turned into his doll form.

Banker has shown some ability to manipulate Black Rukh.

Bolg - This is said to be the proof of a Magician. It is a defensive ability. It blocks out attacks with evil intentions. It also blocks out all physical attacks and magical attacks to some degree. However, its strength depends on the person. 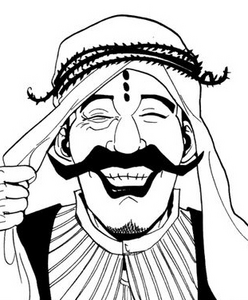