Monster
The Marquis de Léon (formerly known as King Leo) is a boss character from Dragon Quest IV, who first appeared in Chapter 4. This lion-like monster is the son of the former king of Palais de Léon; once he received the Secret of Evolution from Balzack he became power hungry, locking his father in jail and taking over the throne as one of Psaro the Manslayer's enforcers.

When Balzack is defeated by Meena and Maya in an attempt to avenge their father, the Marquis intervenes and easily defeats them, having them locked in jail as well, though they escape shortly after.

During Chapter 5, the Legendary Hero arrives at Palais de Léon looking for Ragnar McRyan, who had been too busy beating the Marquis soldiers to confront Marquis de Léon by himself. Ragnar is surpised to see the Hero and the whole team proceeds to the hidden chamber of the Marquis. While Ragnar holds off the soldiers, the Hero confronts him and, after a harsh battle, this beast is finally defeated. The defeated Marquis then reverts to his original human form, losing all memory of what he did while transformed into a monster.

He resembles a blue lion with a gray mane and red eyes (though in the NES version they are perceived as entirely white). He has eight legs; stands up on four and the rest are used as arms.

This monster is capable of attacking twice, besides swiping at his foes, he also knows the spell Kasizzle. But perhaps his most dangerous ability is his Cold Breath. 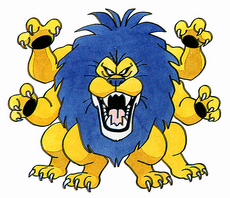 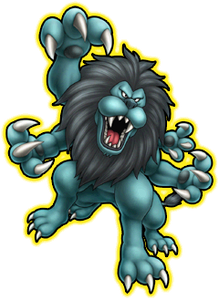 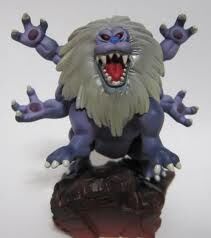