Power over the criminal underworld

Establishing himself as the kingpin of LA.

Obtain the briefcase from Jules and Vincent.

Exact revenge on Zed for raping him (both succeeded).
Hunt down (succeeded) and get revenge on Butch Coolidge for betraying him (formerly).

Marsellus Wallace is the main antagonist of the 1994 crime film Pulp Fiction. He is the crime kingpin of Los Angeles, the husband of Mia Wallace and the boss of Vincent and Jules.

He was portrayed by Ving Rhames, who also portrayed Nathan "Diamond Dogs" Jones in Con Air.

A big time gangster, Marsellus Wallace pretty much owns the town. He has connections of every kind, and he has a fearsome reputation. There is even a rumor that Marsellus once threw a man off a four-story balcony through a greenhouse for touching his wife Mia's feet.

Marsellus is an unseen character in the film's prologue, in which he has sent two of his assassins, Vincent Vega and Jules Winnfield, to kill a group of men who had borrowed money (and an unseen, glowing object in a briefcase) from him and tried to cheat him. During this segment, Vincent tells Jules that Marsellus asked him to (platonically) keep Mia company while he is out of town. This sets up the first chapter, "Vincent Vega and Marsellus Wallace's Wife".

In the second chapter, "The Gold Watch", Marsellus bribes boxer Butch Coolidge to take a dive in his next fight, but Butch double-crosses him and kills his opponent, costing Marsellus a great deal of money. Furious, Marsellus orders his minions to "scour the Earth" for Butch so he can kill him. However, Butch manages to elude Marsellus' men, even killing Vincent.

The next day, Marsellus sees Butch on the street as he buys a box of donuts, Butch having returned to his apartment to retrieve his father's gold watch. Before Marsellus can react, however, Butch hits him with his car, which he promptly crashes. When he regains consciousness, Marsellus pulls a gun and begins shooting wildly at Butch, at one point wounding an innocent bystander. He chases Butch into a pawn shop, but Butch gains the upper hand and beats him up. Unexpectedly, however, they are both taken hostage by the shop's owner, Maynard, who binds and gags them.

Maynard calls over Zed, his partner in rape and murder, who takes Marsellus into a back room while leaving Butch with their "gimp". Butch breaks free and knocks the "gimp" unconscious, but has a moment of conscience and goes back to rescue Marsellus. He finds Zed sodomizing a helpless Marsellus while Maynard watches, and kills Maynard with a samurai sword he found in the pawnshop. Now free, Marsellus tells Butch to step aside, and shoots Zed in the crotch with a shotgun. As Zed writhes in pain, Marsellus tells his rapist that his suffering has only begun, promising to call over his henchman, armed with pliers and blowtorches, who will "get medieval on your ass". Marsellus then shows his gratitude to Butch for saving his life by allowing him to leave town unharmed, provided that he tells no one about the rape and never comes back.

Marsellus appears briefly in the film's final chapter, "The Bonnie Situation", set a few days earlier. Marsellus takes a call from Jules, who tells him that Vincent accidentally shot a man in the face while driving away from the hit Marsellus sent them on, and that they need to get rid of the evidence. Marsellus sends his personal "cleaner", Winston Wolf, to fix the situation. As he is talking on the phone, a woman who is implied to be his mistress serves him breakfast. 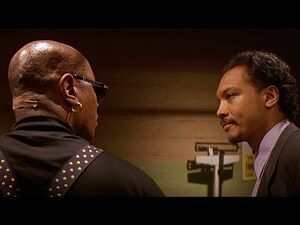 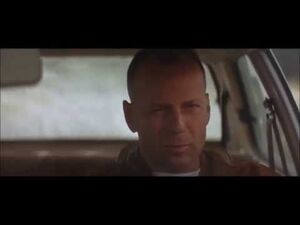