Sending out kaijin on missions.

Torturing and massacring those who oppose Destron.

Eliminate the population of Japan.

Marshal Armor is an armored warrior from Mongolia serving as a high-ranking member of the terrorist organization Destron and a major antagonist in Kamen Rider V3. He is the fourth and final Destron executive to appear and the archenemy of Riderman/Joji Yuki.

Armor leads a group of kaijin called the Armored Division, which is comprised of mutated versions of armored animals. He has the power to assume the form of Zariganna, a crab kaijin.

He was portrayed by Bunya Nakamura.

Marshal Armor and his Armored Division were called to take command of Destron's Japan branch after the failures of Archbishop Wing and his Wing Unit to defeat V3.

To bolster his power within Destron, Armor framed his rival scientist Joji Yuki for treason and attempted to kill him by throwing him in acid. Yuki survived but at the cost of his arm and was rescued by his followers in the science division. Yuki was later reconstructed as Riderman, causing Armor to fear his position in Destron was in jeopardy.

Armor later schemed to insert parasites into people to turn them into horrible monsters to attack the city and committing mass murder of many innocent people and to take Earth's gas.

He later sends his Kaijin Rhinoceros Tank, disguised as Santa Claus, to lure children into the House of Good Fortune so that they can be brainwashed and trained to be future Destron commandants. However, Rhinoceros Tank was defeated by the Kamen Rider V3.

For his ultimate scheme, Armor plotted to obliterate all of Toku with an atom bomb and abducted a genius scientist to force him to work on it. However, the scientist betrayed Destron and told V3 and Riderman about Destron's plot, helping them to escape a trap in Destron's base. With the bomb already completed, Armor had no more use for the scientist and executed him for spilling away Destron's secrets, hanging his body outside Destron's base as a warning to all who would defy them. The atom bomb plot was ultimately thwarted by Riderman after he took control of the bomb and steered it away from Tokyo so it could safely detonate high above the clouds, seemingly giving his life in the process.

Soon after, V3 infiltrated Destron's Tokyo outpost, but Marshal Armor and several revived Destron Inhumanoids were waiting for him. He then became his Kaijin form Zariganna to fight Kamen Rider V3 himself. After being defeated by V3's V3 Full-Revolving Kick, he reverts back to his human form and retreats. However, he was killed soon after by the Great Leader of Destron for failing defeat V3.

Following his demise, Marshal Armor's mind was restored to a new Crab Inhumanoid body. With his newfound power, Armor began searching for his former rival Riderman seeking to eliminate him. He eventually found Joji Yuki with Interpol agent Annrieta Birkin and attacked the pair, but the two were able to escape and were washed up on the island of Tahiti.

He eventually tracked Joji Yuki to the island where he had befriended the locals. As Yuki was talking with Annrietta, Armor ambushed an impaled Annrietta on one of his claws. However, Joji Yuki was able to unlock his cyborg implants after his helmet was returned to him, becoming Riderman once more to fight Armor. Armor was ultimately destroyed by Riderman's Machine Gun Arm after he plugged it into the crack in Armor's armor and began firing, obliterating the Marshal.

Armor wields an oversized spiked mace in his left hand and is a user of dark magic. He is also capable of assuming his kaijin form Zariganna, which gives him increased fighting ability.

Marshal Armor is a cruel and barbaric tyrant, commanding the Armored Division with an iron fist and not tolerating any sort of failure. There is little he will not resort to, including murdering innocent civilians and even children, if it forwards Destron's goals. The Marshal's primary concern is not just the furtherance of Destron's goals, but the furtherance and solidification of his own power, as Marshal Armor values his own life above all else. To this end, Armor was even willing to frame Destron's top scientist for treason as he believed he posed a threat to his rule.

As a means of asserting his power within Destron, Armor frequently engages in barbarous acts against both human hostages and occasionally those subordinate to him, torturing and murdering them on a whim. His favorite tactic for forcing compliance from someone not already loyal to him is to threaten that person's life and, when that doesn't work, to threaten the lives of their loved ones. Despite this barbarism, Armor is able to command the loyalty of his subjects through projecting the image of a powerful and fearsome conqueror, something which he is for the most part able to live up to. Should he ever have to choose between what is best for Destron and his own life however, Armor would almost certainly choose the latter. 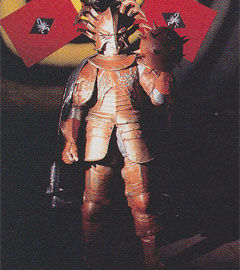 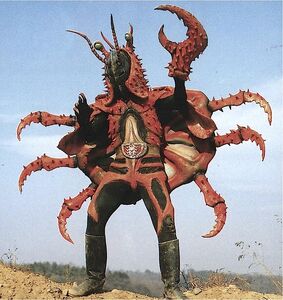