Maintain her rule in Mars and conquer the galaxy.

Queen Tyr'ahnee, better known as the Martian Queen, is the central antagonist of the animated series Duck Dodgers.

She was voiced by Tia Carrere of Wayne's World fame.

She does not appear in the original "Looney Tunes" shorts, but rather as a regular on the animated series based on one of those shorts. This white-haired Martian is the ruler of Mars, and is obviously of the same species as her army commander, X-2 (the alias of Marvin the Martian), who works for her.

The Queen's name comes from the word "tyranny", which is mentioned right at the moment she appears in the show's theme song.

Just as X-2's outfit is based on Ancient Roman armor, Queen Tyr'ahnee dresses like an Ancient Egyptian queen. She also has a humanoid body shape and head—as do all Martian females on the show—while males have cartoonish bodies and the classic "8-ball" head like X-2. Like X-2, Queen Tyr'ahnee has no visible mouth, but in the episode The Kids Are All Wrong/Win, Lose or Duck it is revealed that she has a toothbrush.

Tyr'ahnee was first seen in the series premiere, "The Trial of Duck Dodgers", and due to a misconception, she believes that Duck Dodgers (Daffy Duck) is what he claims to be - the most brilliant tactical mind in the universe.

By the episode "To Love a Duck", Tyr'ahnee has an obvious crush on Dodgers, and so has him captured because she wants him to be her king and husband. This upsets X-2, who has a crush on the Queen himself. In the series of tests the Queen organizes for Dodgers to prove his worthiness, X-2 continually tries to harm Dodgers' progress, but to no avail. Eventually, X-2 tricks Dodgers into abandoning the idea by lying to him about the duties the King of Mars would have - while she tells him that he will have power, wealth and glory beyond his wildest dreams, X-2 lies that Duck will instead only have to oversee methane farming operations on another planet, which disgusts Dodgers enough to call his future bride and say "the wedding is off".

Tyr'ahnee is upset about being abandoned at the altar, and in a later episode, "The Queen Is Wild", she tries to lure Dodgers into being killed by kidnapping the Eager Young Space Cadet (Porky Pig). In the end, though, Tyr'ahnee spares Dodgers, as she still has feelings for him.

Tyr'ahnee apparently still has a crush on Dodgers, even after being told by I.Q. Hi that he's not exactly what she sees him as ("Deconstructioning Dodgers"). However, as of the two-part episode "Of Course You Know This Means War and Peace", she is briefly removed from power by the power-hungry Martian General Z-9 and his robotic assistant, Councillor Dish.

When Mars was liberated by Commander X-2 and Duck Dodgers, she became aware of X-2's crush on her. They even planned to wed in the episode "Till Doom Do Us Part" (which immediately followed). By the end of the episode, though, her rather strong feelings for Dodgers are rekindled, and she cancels the wedding. Dodgers, however, has no interest in her by now, and when he tells her that, she responds by calling off the ceasefire between Earth and Mars. 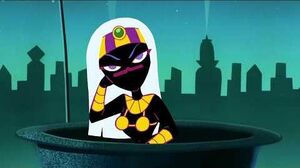 Retrieved from "https://villains.fandom.com/wiki/Martian_Queen?oldid=3890709"
Community content is available under CC-BY-SA unless otherwise noted.