Keep his rank (Both failed).

Martin is the 12th boss in the videogame MadWorld. He is ranked 2nd in DeathWatch.

Martin is just a average gray alien, riding a giant killer robot. His killer robot has a missile launcher his right arm, and a large claw on the left arm. The killer robot can shoot a larger missile out of it's chest and has a buzzsaw in between its treads.

Martin is the final boss in Area 66. He fights by shoot missiles at random areas. If Jack Cayman tries to use his chainsaw on the killer robot, Jack gets hurt by Martin's Buzzsaw. If Jack is on the floor, Martin will either spin his arms around while trying to ram into Jack, or spin his waist around while smashing his claw on the ground. He also attempts to grab Jack with his claw. If he grabs Jack, the power struggle begins. Martin launches a missile out of it's chest. Jack has to outrun the missile.

After the power struggle ends, Jack slides underneath Martin, causes the missile to hit Martin in the back. To cause more damage grab a rocket launcher and deal a chunk of Martin's health.

The second time Martin uses the Power Struggle, for some odd reason Martin decides to ride on the second missile. Martin was presumably killed by the power struggle. However, Martin's killer robot is still around and still active.

But if Jack does the power struggle for a third time, Martin is still alive and rides the missile again. After the killer robot lost his health, one of money shot cuts off and drops onto the killer robot, destroying it. 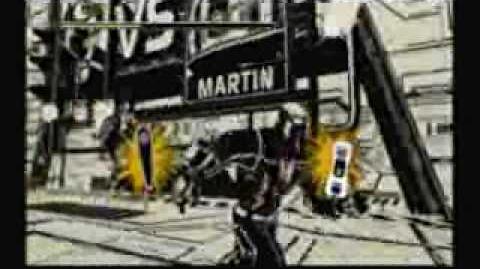 MadWorld Boss Battles 12.- Martin
Add a photo to this gallery

Retrieved from "https://villains.fandom.com/wiki/Martin_(MadWorld)?oldid=3909209"
Community content is available under CC-BY-SA unless otherwise noted.