Patient of the Mount Massive Asylum

To unleash the Walrider into the world, to spread his "gospel", and to let the world see what took place at Mount Massive Asylum.

Martin Archimbaud, also known as Father Martin, is a major character in the 2013 survival horror video game Outlast and a cameo character in its DLC Outlast: Whistleblower. He presents himself as a very religious priest and self-proclaimed prophet. He was a patient at Mount Massive Asylum.

He was voiced by Andreas Apergis.

Father Martin appears as a bald, slightly chubby old man in his sixties, who wears a garb of a black unbuttoned straitjacket fashioned into a robe-like garment, with the back draping down to his ankles. He also has black pants, matching black slippers and beige straps around his torso and wrists, with the torso straps fashioned into the shape of a cross.

Father Martin sees himself as a prophet of his god, The Walrider, and believes that it is his duty to spread it's gospel. He presents himself as a calm and good man only doing his duty, even apologizing to Miles for sedating him. His faith is so strong that he eventually has himself burned alive on a cross as a ritual offering to the Walrider, believing that he & his followers will then be resurrected and free.

Father Martin & his message apparently had a rather powerful influence among many of his fellow patients, and by the time of Miles' arrival, the preacher had gained control of a number of them as followers of his religion, such as The Twins. His influence was enough that he was able to grant Miles safe passage through certain sections of the asylum, having commanded his followers not to harm Miles.

However, many inmates like Chris Walker & Eddie Gluskin are not under his leadership. Additionally, Trager seems to despise the priest & his religion entirely, as evidenced by his rants before he cuts off Miles' fingers.

Martin is completely delusional and blindly religious to The Walrider, viewing the entity as a God & acting as a priest & prophet who focuses solely on these beliefs. This mindset warps him into viewing almost every occurrence around him as related to his religion, such as viewing Miles crashing down next to him as The Walrider sending him an apostle.

His devotion is both suicidal and murderous, willing to crucify and burn himself alive for the sake of The Walrider, and has seemingly killed at least one or possibly multiple people in order to use their blood to paint his messages around the asylum. For example, he can be seen during the "Whistleblower" DLC fingerpainting on a wall using a bucket filled with blood, with a large trail of blood leading to the nearby corpse of a security guard. This indicates that he may be more dangerous than he first appears, although it is possible that his followers may have committed the murder/s for Martin.

His patient document also states that he likes fingerpainting, and that he used to fingerpaint regularly until the asylum's art therapy program was halted.

A note found by the player describes a patient called "Father" Martin Archimbaud who has begun suffering from delusions of a "higher calling" after the asylum's art therapy program is done away with. The quotation marks around the word "father" in the note imply that his status as a priest is questionable. This origin is hinted at by the cross on his chest, which appears to be fashioned from straps, and at times a buckle is visible. His religion worships The Walrider, as it's the only explanation he could suffice in his current mental state. His past experiences with fingerpainting may have led him to mark the path for Miles in blood in the form of writing, arrows, smears, etc. Several collectible documents throughout the game are also written by him.

Miles first encounters Father Martin in the atrium after being thrown through a window by Chris Walker, another inmate at the asylum. Seeing their meeting as divine intervention, he appoints Miles as his "apostle" and tells him that he has a greater purpose. After Miles wakes up from the blackout, Martin is gone. Shortly after, he is seen on a monitor in the Security Control room, cutting off the power to the asylum from a generator in the basement.

After Miles restarts the generator and returns to the Security Control room to open the main doors, Father Martin overwhelms him and injects him with a sedative. He says that he cannot allow Miles to leave, for there is so much yet for him to witness. He then shows Miles security footage of a squad of Murkoff soldiers being slaughtered by an entity called the Walrider, and tells him that he must accept the gospel so that all doors before him will open. Miles then blacks out and is transported by Father Martin to the holding cells in the Prison Block.

He can first be seen in the Sewer, nonchalantly walking through a blocked off passage whilst singing a hymn.

The next encounter is near the end of the Male Ward after escaping from Trager, where he exclaims how relieved he is that Miles is alive, & how he feared that Trager would carve him up like he did with numerous other patients. He then tells Miles that they're "close now" and that Miles should follow him outside to the Courtyard, where he leaves a message in blood and a document near the flickering lantern post.

Father Martin is seen next inside the Female Ward, waiting on the middle floor of a collapsed section, where he shouts to Miles about seeing the Walrider in the courtyard and tells him that he can cross from the upper floors to reach him. He can be seen a second time in the Female Ward through a hole in one of the crumbling walls, where he is standing in the doorway of another collapsed floor & reciting prayers, some of which are notably spoken in Latin.

Father Martin is last seen inside the Chapel on the upper floors of the Administration Block, where he is crucified & immolated in a ceremony as a sacrifice to The Walrider, and tells Miles to record his death. A document explaining the ritual can be found earlier in one of the rooms with a praying patient.

Martin makes a cameo appearance in the Prison. He is seen by Waylon Park in a corridor painting "Down the Drain" on the wall for Miles Upshur, who had recently entered the asylum. He tells Waylon not to worry, for he is doing "his" work. Much later in the DLC, if Waylon looks out of a window in the Male Ward he can see the exterior of the chapel, now ablaze in the aftermath of Father Martin's death. 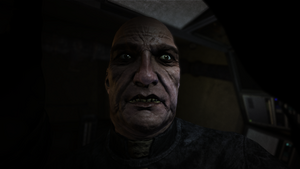 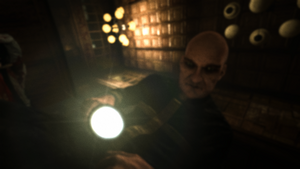 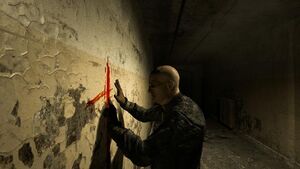 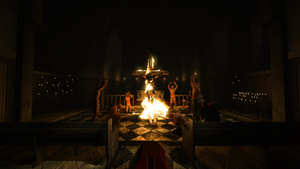 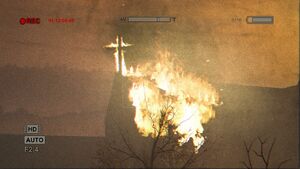 The Burning Chapel seen in Whistleblower.
Add a photo to this gallery

Retrieved from "https://villains.fandom.com/wiki/Martin_Archimbaud?oldid=3963395"
Community content is available under CC-BY-SA unless otherwise noted.