Villains Wiki
Register
Don't have an account?
Sign In
Advertisement
in: Movie Villains, Cartoon Villains, Doctors and Scientists,
and 28 more

The Secret of NIMH

Take over Thorn Valley.
Brainwash Jenny and make her his queen.
Kill Timmy (all failed).

Martin Brisby is a supporting character in Don Bluth's 1st animated feature The Secret of NIMH, and the main antagonist in its 1998 direct-to-video sequel The Secret of NIMH 2: Timmy to the Rescue. He is the second-oldest child of the Brisby Family who becomes a twisted psychopathic villain after being experimented on by Dr. Valentine.

In his villainous ego in the second film, he was voiced by Eric Idle, who also played Paul "Dibs" Plutzker in Casper (1995) and Guzelian in Buzz Lightyear of Star Command.

Martin is Timmy's brother and son of Mrs. Brisby. He was captured by NIMH. He became insane when the doctors brainwashed him. After being made insane, Martin took over the lab and brainwashed Dr. Valentine with a device similar to the one Valentine used on him and made him think he was a dog. Martin plans to use an army of lab rats riding a flock of ravens to take over Thorn Valley.

He asks Timmy to join him, but he refuses and is locked in a cage as Martin drags Jenny away to try to make her his queen. Timmy escapes with the help of Cecil and they go to free Jenny. Together, they knock out Martin and Timmy tricks Martin's army of ravens and rats to fly in the wrong direction.

Timmy and Jenny then leave to find the others, only to find once everyone is free that NIMH is on fire. The survivors (Timmy, Jenny, and her parents, as well as Justin and Brutus) flee. Timmy goes back to save Martin. Before he leaves, Jenny tells him she loves him and he tells her the same.

After being attacked by the cats Muriel and Floyd once again, Timmy sends them down an elevator shaft and finally finds Martin, actually, Martin finds him. Timmy and Martin are able to escape through the lab's skylight, with some help from Jeremy. Jeremy takes the survivors to safety. The mice return to Thorn Valley, and Martin returns to normal.

Martin in the first movie.

Martin in the second movie, before his brainwashing. 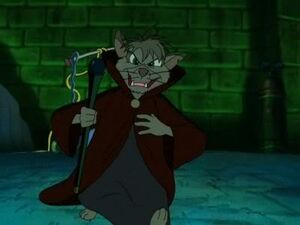 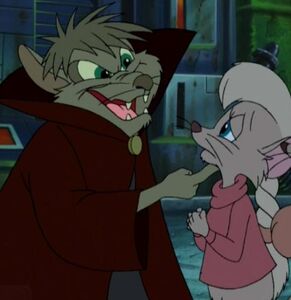 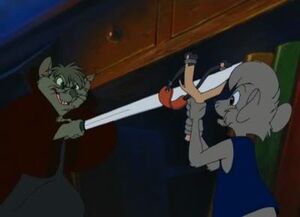 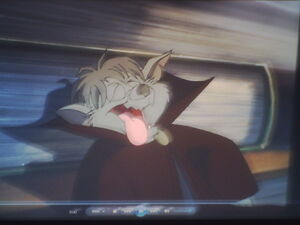