Prisoner of the Crystal Citadel (both formerly)

Escape from the Crystal Citadel (succeeded).

Opportunistic Parent
Martin Mertens is a major antagonist in Adventure Time, being the secondary antagonist of Season 6 and a flashback character in the Islands miniseries. He is Finn's biological father, but he doesn't care about him at all, the reason behind his behavior is because of brain damage that he suffered in the past.

He was voiced by Stephen Root, who also voiced Unity and Reverend Amos Howell in Superman: The Animated Series and Mildew in DreamWorks Dragons: Riders/Defenders of Berk.

In "Escape from the Citadel", he wears a red leotard-type outfit with red spiked shoulders. He has red boots that almost go up to his knees. In "The Visitor," his leotard has been somehow torn, leaving just enough to cover his lower body and his chest is left bare. He also wears a green military-like jacket and his hair in a loose ponytail.

Unlike Finn's selfless and moral personality, Martin is revealed to be an incredibly selfish, deceitful, exploitative, and narcissistic individual who barely acknowledges his son's presence unless it benefits him. From the moment he is freed, he is focused solely on saving himself, more shocked at the lack of escape than meeting his biological son, Finn. The extremity of his selfishness is shown when he does not even have a reason for abandoning Finn (suggesting he simply left his own baby son to die in the woods without any remorse) he simply says he doesn't remember, even attempting to shift the blame to Finn by saying "maybe YOU left ME", revealing just how immensely immature Martin is.

Martin is also a very emotionally barren person. He has absolutely no empathy and does not seem to understand how his actions affect others, such as treating Finn's emotional attempts to bond with little more than irritation and ingratitude. He then proceeds to manipulate Finn into fixing his leg by baiting him with paternal affection. Once his leg is fixed, he once again abandons Finn, completely unconcerned that Finn loses his arm in a desperate attempt to stop him.

In "The Visitor", it is shown that Martin has a very cruel sense of humor. When calling Finn up into the tree that he has been living in since the crash, he seemingly has lost an arm, but after ensuring that Finn has "gotten over" the arm losing incident, he reveals that he still has his arm.

Despite being deceptive and careless, it is however revealed in a flashback in "Min and Marty" that Martin was actually a caring father once. However, after saving Finn's life from the Guardian, he suffers brain damage and memory loss causing him to become a jerk like he is today.

Martin was Finn's biological father who was locked up in the Citadel for unknown reasons. He was first mentioned towards the end of the Season 5 finale entitled "Billy's Bucket List" in which the late hero, Billy, informs Finn of him being alive and imprisoned in the Citadel. Season 6 opens with Finn and Jake entering the Citadel to find Martin. They also unwittingly brought the Lich with them.

When they finally found Martin, it turns out that Martin wasn't all as cracked up as Finn built him up to be, for he was actually a jerk who couldn't care less about his son; in fact, he doesn't even remember him nor does he even remember why he abandoned him in the woods those many years ago.

At the climax of the episode, the Lich is defeated with the Guardian's blood getting sprayed on him, and Martin attempts to escape the collapsing Citadel in an escape pod. Finn grabs onto the escape pod using his Grass Sword, and it transforms on his arm. Unfortunately for Finn, this mutation causes his arm to get severed from its socket, and he finally loses his right arm. Jake and Shelby then go to Finn to comfort him about losing his arm and his father.

Later, the reason Martin abandoned Finn is revealed in a flashback in the Islands miniseries where he and baby Finn are chased off from an island as a result of Martin's past con-artist ways. To protect Finn, Martin defeated the guardian that thought they were trying to escape the island on a raft. However, Martin was knocked unconscious and baby Fin survived on a breadstick wand until his raft reached Ooo.

During the miniseries, multiple flashbacks further show that Martin used to be a con-artist who worked with others trying to escape the highly secured Hub Island until he met his future wife Minerva.﻿ After this Martin changed his ways and became a barber. Eventually, Finn was born and Martin took care of him especially when Minerva was working late at the hospital, which changed once he was pursued by his old foes.

Martin was found by sailors after the incident and because of his brain damage and amnesia, causing him to forget his family and life, proceeded to somehow get to space and cause a cosmic crime, which made him end up in the Citadel. 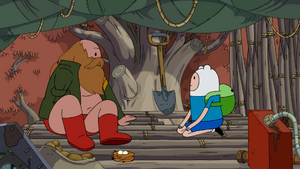