Succeed in the Freeland Project.

Martin Proctor is one of the two main antagonists (alongside Tobias Whale) of the first season of the 2018 CW series Black Lightning.

He is portrayed by Gregg Henry, who also portrayed Gallatin in Star Trek: Insurrection and Brother Blood in Teen Titans Go!.

As part of the so-called "Freeland Experiment", the A.S.A. under Proctor unleashes the drug Green Light into the city. They use the criminal cartel of Lady Eve to distribute the drug in the city.

After Lady Eve has been killed with electricity and everyone assumes it was Black Lightning, Proctor meets with Peter Gambi. After Gambi drives up, Proctor reveals that he regrets not having killed Black Lightning the moment he returned to the city and that Lady Eve is now dead as a result; Lady Eve who was the liaison between the A.S.A. and the 100 Gang and helped distribute the Green Light drug into the city. He states that with Eve's death, Although Gambi mentions that Black Lightning could have been set up, Proctor ignores that possibility and states that they do not need more evidence than Lady Eve's murder with electricity.

Proctor states that he usually values Gambi's council but that Black Lightning has become more than a nuissance, he has become a threat. He reveals that he put a bounty on Black Lightning's head and although Gambi states that captureing Black Lightning could help them understand the enhancement of human abilities, Proctor counters that the A.S.A. has cut up so many meta-humans that one more will not make a difference. He reminds Gambi that when Black Lightning returned, Gambi promised that he would find out his identity and take care of the business. Since Gambi failed, Proctor will now bring A.S.A. operatives into the city to kill Black Lightning. He tells Gambi to give them any information they have so that they can kill the vigilante. Disgusted, Proctor tells Gambi that he finds Freeland disgusting and that the only thing its citizens are good for is experimentation - so the people should be actually glad, A.S.A is distributing the Green Light.

After being informed about Proctor's plans to kill him by Gambi, Black Lightning and his daughter Thunder set out to stop proctor. When they arrive at the A.S.A. lab at night, they witness Proctor having a conversation on his cellphone about moving something from the lab. The two heroes follow Proctor into the facility and start destroying equipment. When he hears the noise, Proctor orders one of his subordinates, the corrupt policeman Cayman, to take a look but Cayman and his men are taken out by Thunder. When Proctor realizes that Black Lightning is nearby, he contacts his assault team who confirm that they are close and are moving in. Proctor tells them to also prepare for evacuation. While Black Lightning walks down the stairs towards Proctor, Proctor draws a gun and aims it at one of his own scientists, threatening to shoot him if Black Lightning comes closer. However, Black Lightning only laughs and states that he would be doing the world a favor.

When suddenly, Detective Henderson arrives and shoots one of Proctor's henchmen, Proctor uses the opportunity to flee but leaves the doctor behind, who is arrested by Henderson. While Henderson leads away the doctor, Black Lightning uses his powers to destroy the rest of the laboratory equipment.

After the setback, Proctor heads to Gambi's tailor store and tells Gambi that he will have to come with them. Gambi draws two guns and aims them at Proctor and the agent accompanying him, but Proctor tells Gambi that he has another man outside who will start shooting pedestrians if Gambi does not leave the store with Proctor in the next two minutes. Gambi tries to bluff and claims that he does not care for some random civilians but Proctor sees through him. After Gambi lowers his gun, Proctor replies that part of him wished that Gambi would let the man shoot them. Proctor's agents then disarm Gambi and follow Proctor outside with him.

Proctor has his men bring Gambi into the basement of one of their facilities and has them beat him bloody. Afterwards, Proctor reveals that he knows Gambi broke into one of the A.S.A. facilities and that soon after, Black Lightning turned up there as well. He thinks that the only reasonable explanation is that Gambi told Black Lightning about the warehouse and that his must mean that Peter has a way to contact Black Lightning. Gambi keeps lying and calls Proctor an ass but Proctor only smiles sadistically and has his henchmen waterboard Gambi.

After Gambi has passed out from pain, Proctor has his men wake him back up. He then speaks to Gambi, recounting that Gambi left the A.S.A. but did not leave Freeland. Instead, he helped raise Jefferson Pierce, the son of the journalist who investigated the A.S.A. Proctor rhetorically wonders what reason for this Gambi could possibly have and then sends out his men to kidnap Jefferson Pierce - loudly asking whether Pierce is as tough as Gambi. After the men return with Pierce, Proctor has already left and instead leaves the interrogation to his henchmen. Pierce easily uses his powers to defeat the two. Soon after, Proctor meets with his spotter Kara Fowdy - the vice pricipal of Pierce's school - and reveals to her that Jefferson Pierce is Black Lightning. He then orders her to take Pierce down.

After having spent several weeks healing and mourning his deceased sister, Tobias Whale eventually resurfaces. Inside the A.S.A. facility where he regenerated, he meets with Proctor. Proctor claims that he is glad to have Whale back and claims that it seems that Black Lightning really wanted to see him dead. Tobias replies that he acknowledges the medical care the A.S.A. provided and Proctor tells him that Whale is important to them - especially since Lady Eve has gone which left a vacancy. Proctor asks how much Whale knows about Eve's operation but Whale keeps his answer deliberately vague.

Proctor then reveals to Whale that his organization tried to develop a drug in Freeland which was supposed to allow them to control the citizens. However, the drug did not work and instead gave some of the victirms meta-human abilities. Since the drug was not perfected, the subjects died before they could become fully operational and the A.S.A. keept working on the drug until eventually, the perfected it into its current form - Green Light. Proctor claims that the yields are better yet the survival rate has not changed. Thus, Proctor wants Whale to find and capture Black Lightning and bring him to the A.S.A, because Black Lightning is one of the meta-humans but has not yet died like all the others. This does not sit well with Whale, who wants nothing more than see Black Lightning dead. Proctor pays this no mind and tells Whale that he finished the project Whale was working on before he gut hurt. The same moment, Khalil Payne enters the room - revealing that he can walk again. Together with Khalil, Tobias leaves and Proctor once more reminds him that he needs Black Lightning alive.

After Proctor is informed by Kara Fowdy that Black Lightning has seemingly been killed during Tobias' attack, he furiously orders her to find his corpse and bring it to him, as well as Thunder - dead or alive. He also sends men out for Tobias, who ignored his orders by murdering Black Lightning. When one of his agents reveals that the closest connection they could find to Tobias was the drug dealer Lala, Proctor is annoyed because he has no patience for interrogating every black drug dealer with a rap sheet. Proctor is also informed that during the attack on the lab, the meta-human pods have been damaged and that if they do not get stable meta-human DNA in the next ten hours, most of the subjects in stasis will die.

Proctor then calls the attention of all his agents and tells them to stop doing what they are currently doing. He warns them that in the age of meta-humans, they need to have more than any other country as a way of protecting their country. He warns them that failure is not an option and tasks his agents with finding both Lala as well as a meta-human to save the pods. Soon, Lala is brought to the A.S.A. and claims to have information for Proctor about Whale. After he is cuffed and brought into an interrogation room, Proctor demands that Lala tells him the information he has. However, Lala suddenly starts coughing up an activation mechanism for a bomb - which Proctor sees in time to flee the room before Lala activates the bomb hidden inside him and kills himself as well as the agents surrounding him.

After the technicians have located Black Lightning and his family in a shed in an abandoned forest outside the city. Proctor sends his A.S.A. special forces team into the forest to capture the family and watches the incident through the agents' body cams. However, the agents are severely outmatched against the meta-humans, yet Proctor refuses to allow them to retreat. In addition, the Freeland Police Department has been alerted to the firefight and the fuming Proctor eventually allows the retreat. The same moment, the A.S.A. iteself comes under attack from Whale, Syonide and Painkiller. After they have taken out all agents inside the building, the three storm the controll room and despite Proctor firing back at them, come closer. With his high security clearance, Proctor opens a hidden exit but prevents his remaining agent from escaping with him, using his gun to hold him back.

Proctor flees to the storage facility where the meta-humans are stored but to his horror, is confronted by the entire Pierce family as well as Peter Gambi. Amused, Proctor comments that it seems that the situation turned into a family affair and he proudly claims that he knew that Pierce was Black Lightning. When Pierce states that this knowledge will be a problem, Proctor warns him that he is a federal agent and that harming him will bring the wrath of the USA onto Pierce. However, Gambi tells Proctor that he realized that Proctor has no governmental backing at all, since he would have called in reinforcements long ago if he had. Since Proctor is leading a rogue operation, they are not up against the A.S.A., they are only up against Proctor and his rogues. Spiteful, Proctor admits it and snarls that political correctness is killing the country. Incredulous, Gambi reminds him that the first Freeland Project killed a lot of kids and asks why Proctor decided to run a second experiment but Proctor screams that all these kids would have ended up in prison or on social wellfare anyways. Furious, Jennifer Pierce uses her powers to capture Proctor in electricity and strike him to the ground.

Realizing the situation, Proctor then addresses Pierce and informs him that the meta-humans in the pods are dying and that he can save them. Proctor offers to save all the meta-humans if Pierce gives him a sample of his DNA, claiming that the A.S.A. would accept Proctor back with a blank check if he would do so. However, Gambi accuses him of being a monster and when Proctor claims that they will either make a deal with him or he will return and kill them all, Gambi shoots him into the chest thrice and kills him. 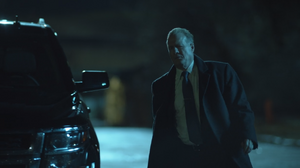 Proctor arrives at the lab 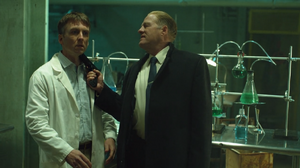 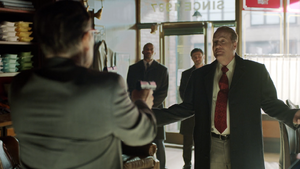 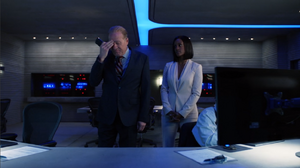 Proctor is informed that Tobias failed 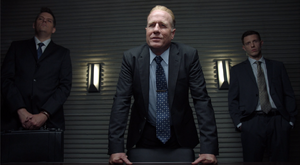 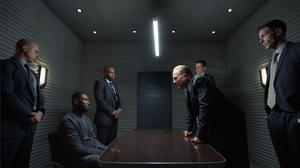 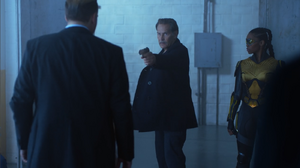