Closing firehouses and embezzling money from the fire department.

Lying to the fire department, the entire city of Chicago and to the press.

Make a lot of campaign money and use it for personal purposes (somewhat succeeded).

Run for Mayor of Chicago (failed).

Martin "Marty" Swayzak is the main antagonist in the 1991 film Backdraft.

He was portrayed by the late J. T. Walsh, who also portrayed Frank Fitzsimmons in Hoffa, Lt. Col. Matthew Markinson in A Few Good Men, Big Bob in Pleasantville and Warren "Red" Barr in Breakdown.

Martin Swayzak was born in Chicago, Illinois and majored in studying politics and earned a degree in politics. His biggest dream was to become the Mayor of Chicago. A few years after Richard M. Daly (son of Richard Daly) became Mayor of Chicago, Martin was chosen to become Daly's opposing candidate in the Mayoral election. At the time he was running for the Mayoral office, Martin was the Alderman of the City Council. Martin Swayzak is a corrupt, arrogant and greedy individual who works for Chicago's City Council and hopes to defeat Richard Daley (who was Mayor of Chicago from 1989 to 2011). The three men are Alan Seagrave, Donald Cosgrove and Jeffrey Holcomb. Martin is curious to know whether his henchmen were killed in accidental fires or arson fires (but, he is aware that all three of his henchmen were killed in backdraft explosions). Swayzak is also notorious for making a controversial decision on closing firehouses and converting them into community centers. The main reason he closed the firehouses was to make money for his campaign, which also results in the deaths of many firefighters. Martin also offers Lieutenant Stephen McCaffrey to join his task force, Stephen refuses to join the task force in response to the deaths of three firefighters who died due to the controversial budget cuts that Martin made for the department.

After Swayzak’s friends were killed, Brian asks Jennifer Vatikus, Swayzak's friend to give him the budget documents. When Jennifer sees Martin, she's about to tell that the polls came in and then sees him staring outside and asks if he knows anything about the deaths of his friends. Martin replies with "No." Jennifer goes to over to Brian's house to give him Swayzak's documents. The following day, Brian shows Donald the files that Jennifer gave to him and it's revealed that Swayzak and his friends had no task force or any employees to help shut down the firehouses, only a P.O. Box and that Martin secretly hired Seagrave, Cosgrove, and Holcomb to create a fake manpower study. Donald decides that he and Brian should to go to Martin's house and confront him. While Brian and Donald are inside Swayzak's house, Donald smells gas and tells Brian to check for gas. Brian tries to shut the gas off that is until he gets brutally beaten by a man wearing a ski mask, heavy jacket and holding a flashlight. Brian pushes the man back towards a sparking outlet. The unidentified intruder screams in pain as he is pushed back against the sparking outlet. Martin is found unconscious and is bleeding heavily. As Martin's house catches on fire, Swayzak gets taken out by Brian and Donald. It would later reveal that the intruder who tried to kill Martin is John Adcox after Brian notices a scar on John's back.

After the funeral was held for John and Stephen, Brian and Donald have the police help them crash Swayzak's press conference. Donald tells Martin that the police would like to know why he hired all three of his henchmen to create a fake manpower study and who was responsible for making money off of firefighters dying (including Stephen and John). Brian then tells a dejected Martin, "You see that glow flashing in the corner of your eye? That's your career dissipation light. It just went into high gear!" As Martin gets taken away by the police, he states, "I'll have my aides look into it as soon as they possibly can. Thank you!" As the press continues to ask questions, a press holder for Martin announces, "The Alderman has no further comment at this time. This press conference is now over." 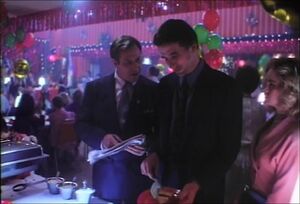 Martin speaking to Brian in a deleted scene. 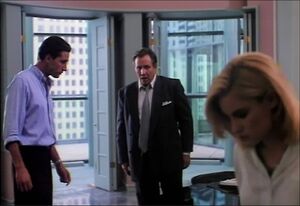 Martin in another deleted scene.

Martin greeting Brian on a boat.

Martin getting his picture taken with Brian

"When are you going to catch the prick that's doing this Don?"

Martin unconscious after being brutally beaten by John Adcox

Martin being carried out.

Martin on the news

"Now that is quite a bunch of guys!"

Martin denying anything suspicious about the deaths of his friends

Martin getting a surprise visit from Brian, Rimgale and the Chicago Police Department.

Martin is stunned that he has been found out by the police.

Brian tells Martin "You see that glow flashing in the corner of your eye? That's your career dissipation light. It just went into high gear."

As Martin gets taken away by the police, he states "I'll have my aides look into it as soon as they possible can. Thank you!" 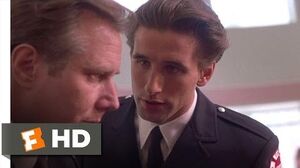