Satan (by Patty)
Demon (by Joe)

Drive Joe Martinez insane by making him become addicted to drugs and ruin his soul.

Demonic Entity
The Martinez Dog Demon is a paranormal entity (commonly believed to be a demon) captured in an infamous photograph from Joe and Patty Martinez during their friend's 50th wedding anniversary - it is a striking example of a phenomena in which unseen entities appear in photographs but have not been spotted by anyone during the time, what's even more striking in this particularly creepy case is that the subject the creature apparently stood behind and his trouble background. While many attempts have been made to figure out what the true cause of the phenomena may be it remains a largely mysterious and unsolved paranormal case.

Joe Martinez had been struggling with a deep-rooted drug addiction for many years but kept it largely hidden from those around him, he claimed this addiction was driving him mad and "soul-destroying".

Despite this, he and his wife, Patty, would attend their friend's 50th wedding anniversary and posed for a photograph - when the photograph came back however the pair were in for a sinister surprise as a dog-like entity was seen leering from behind Joe's shoulder, there were no dogs at the event and no one reported any animals or guests that could of pulled off the eerie image at the time of the photo being taken.

Joe and Patty became convinced the creature was a demon (in fact, Patty believed it to be Satan himself, though such claims are extremely common with any demonic phenomena) and Joe took it as a sign to battle against his drug addiction - seeing it as  symbolic of the good and evil inside himself, with Patty being his "good" and the demon, obviously, being his "evil".

Joe's exposure to the picture seems to have worked in stopping his drug addiction (he has gone as far as carrying the photo in his wallet to remind himself of his darker times) but the entity has remained a source of fascination among the paranormal society, as well as general "creepy" threads across the internet and beyond. 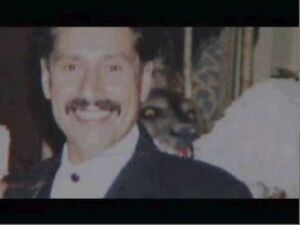 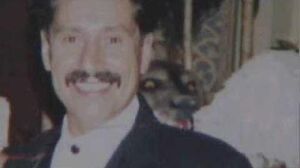