Getting rich off of copyrighted stories.
Firing people for dumb reasons.
Hanging out with his monkey toy Mr. Funnybones.
Antagonizing, harassing, and motivating Jason Shepherd.

Steal Jason Shepherd's paper idea and make it into a theatrical film (succeeded, but never got to enjoy it).

Release the film to the theaters.
Get paid and become popular and more successful than he is right now.
Defeat and break Jason.
Make Jason unpopular for good (all failed).

Martin "Marty" Wolf is the main antagonist of Big Fat Liar. He is the founder and former chairman of his studio Marty Wolf Pictures and Jason Shepherd's arch-nemesis.

He was portrayed by Paul Giamatti, who also played Stan Beals in Warner Brothers' The Ant Bully, Aleksei Sytsevich/Rhino in The Amazing Spider-Man 2, Dr. Satan in The Haunted World of El Superbeasto, Tim from Robots and Karl Hertz in Shoot 'Em Up.

Underneath his public persona as a well-known film producer, Wolf is very selfish, greedy, deceitful, and manipulative in nature. He likes to lie a lot, thinking it can benefit him the most (hence his motto "the truth is overrated"). He is also very abusive and sarcastic towards his employees as he treats them harshly, tending to give them mean nicknames, and even fires several for stupid reasons; he even demoralizes one of his elderly employees Vince from going with his granddaughter to a birthday party. In fact, the closest thing to something Wolf genuinely cares about is bizarrely his stuffed chimp Mr. Funnybones. These traits are what led to his downfall in the end when he is exposed for stealing Jason Shepherd's paper to make his movie.

Despite being a film producer, Wolf is a very foolish and unintelligent dimwit, as he never seems to learn his lesson since he greatly underestimates Jason, despite being tricked by him multiple times. Wolf also likes to do play fights with Mr. Funnybones when he wakes up, as well as act overdramatic and childish when he goes to swim in the pool. Wolf is overall a incompetent man whose only concern is for himself and he will do anything he can to keep being rich and famous.

Would first appeared when Jason Shepherd demands a ride to his school so that he can turn in his writing assignment to pass English class after Jason came up with a creative story idea for his writing assignment which are based on all of his lies from his past. During the ride to his school, Jason explains that he got caught by his teacher for lying about his assignment. Wolf tells him he should have made it more convincing, revealing he is also a compulsive liar, but a more professional one. After stopping at Jason's school, Wolf encourages him to keep practicing his lies and tells him he can take it from, with his word of "advice": The truth is overrated. He then yells at Jason to get out, saying he has a movie to produce. Jason heads off, not knowing he accidentally dropped his report on the limo. Upon seeing it, Wolf initially intends to call out to Jason to hand him back the paper, but upon seeing it is excellent after reading it, he decides to keep it. This puts Jason in trouble with his parents and his teacher Phyllis Caldwell, forcing him to fail English class and undergo summer school to repeat the entire class. At the same time, Marty is in town filming Whitaker and Fowl, starring Jaleel White and a chicken.

Later on, Jason and his love interest Kaylee discover Wolf has plagiarized Jason's paper and is now planning it to turn it into a film after seeing a trailer of it. Jason is outraged at the fact that Wolf plagiarized his story, but his parents refuse to believe this due to their mistrust towards Jason over the incident. Deciding to take action and taking advantage of his parents' trip to the Grand Canyon, Jason decides to confront Wolf. He arranges himself and Kaylee to fly to Los Angeles, where Wolf is preparing for production for his movie in his studio. After having Kaylee trick Wolf's secretary Astrid Barker into letting Jason into Wolf's office, Jason tries to convince Wolf to return the stolen paper to him and call Jason's father to confess that he stole it. However, rather than doing so, Wolf purposefully burns the paper with one of his cigars and his alcohol (much to Jason's shock and anger). Wolf then calls his head of security Rocko Malone to send up two security guards to escort Jason and Kaylee out of the building.

Angered by this turn of events, Jason and Kaylee plan to inconvenience Wolf until he agrees to fess up. A limo driver named Frank Jackson helps them out, stating he was once a struggling rising star until Wolf demoted him to being a driver. They do so by committing several pranks such as dying his skin blue upon dumping blue dye in his swimming pool, dying his hair orange by placing orange dye in his shampoo, and sticking his phone earpiece with instant krazy glue. They also tricked Wolf into going into a kid's birthday party that his stunt coordinator Vince wanted the day off for instead of the house of his boss Marcus Duncan (the president of the studios), and modifying his car's controls. This leads to an incident resulting Wolf's car to be destroyed when he insults a monster truck driver named the Masher after he was rear-ended into him by an elderly lady.

Despite this turn of events, Wolf arrives at the premiere of Whitaker and Fowl, where Wolf will still not give in to Jason's demands. After a lot of people made a comment that Whitaker and Fowl failed, Wolf starts to lose support from Duncan, who states that Whitaker and Fowl costs the studio a lot of money and threatens to pull the production of Big Fat Liar. Jason then offers a deal to Wolf: he will help him out in pulling the green light for the production if he gives the call to Jason's parents and confess to them about the report theft. Jason helps Wolf make an astounding speech that inspires Duncan to green-lit the movie production. Jason hands Wolf his father's phone number and Wolf dials his phone. However, rather than calling Jason's parents, Wolf instead betrays Jason again by calling in Malone and his security guards, who ordered Jason and Kaylee to be sent home in disgrace and that they never speak of this again.

Upset by this turn of events, Jason is about to accept defeat and is forced to call his parents to tell them the truth. Fortunately, Wolf's assistant Monty Kirkham arrives to help them as she has grown tired of her boss' abusive and argumentative behavior and having learned of the theft. Arranging a meeting of several employees who were treated badly by Wolf, Jason, Kaylee, and Monty concoct one final plan of revenge to expose Wolf of his true colors.

The next day, Wolf spent hours with a can of turpentine to get rid of the blue dye on his skin. He then heads to the studio to being his shooting of the movie, but his employees enact several mishaps to delay his arrival. As soon as Wolf finally arrives to the studio, he spots Jason, who has stolen his stuffed toy monkey Mr. Funnybones. After a chase across the studio, Wolf finally recovers his toy monkey and taunts Jason for trying to make him confess about his theft, blurting out he deliberately stole Jason's story and thinking no one has heard it. Wolf tells Jason to give it up since he will never tell the truth. However, Wolf is shocked to discover that several of his employees have recorded his confession with cameras from multiple angles, exposing him of his true colors to everyone in the studio (including Jason's parents, who were brought over to the studio by Frank). Having heard the confession and being disgusted by Wolf's actions for all the trouble of stealing the idea of his movie from a 14-year-old boy, Duncan fires Wolf by furiously telling him that this is the end of the line for him. Jason thanks Wolf for teaching him the importance of telling the truth. Wolf lets out a laugh, but shouts out that he is going to beat him up for his dismissal. He then chases after him, but Jason jumps off the building to avoid him and land safely on the inflatable stunt mat before he regains his parents' trust after Jason's parents asked Jason if he did all of this just to prove that he was being truthful. When Wolf shouts that they have a film to work on, everyone starts leaving in disgust. Wolf shouts they cannot turn their backs on him and that they are all fired, but one person tells Wolf that he sucks.

With Wolf's actions exposed to the public, Wolf was forced to declare bankruptcy by selling away his assets to avoid prison for his acts of theft and copyright infringement, resulting his studio to be shut down. Despite this, the production of Big Fat Liar continues on forward (even Frank becomes the starring actor of the new movie after being rehired by Duncan), proving to be an instant hit in the theaters. Jason is credited for writing the original story and Jason's parents and Mrs. Caldwell are proud of him. In the meantime, Wolf is now reduced as a birthday clown with Mr. Funnybones as his assistant. After being paid to attend a birthday party for a boy named Darren, Wolf is shocked to realize that Darren is the son of the Masher. Recognizing Wolf through the makeup, the Masher orders Darren to show his move called the Nutcracker, and Darren charges at Wolf by striking him in the groin, causing him to groan in pain. 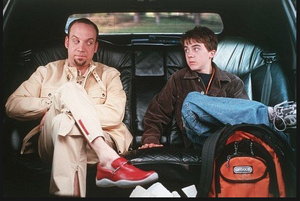 Jason meets Wolf in his limo. 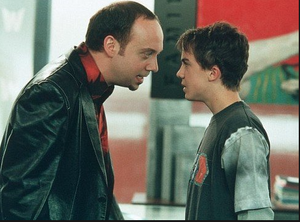 Wolf mocking Jason after burning his report instead of calling Jason's parents to tell them about the theft. 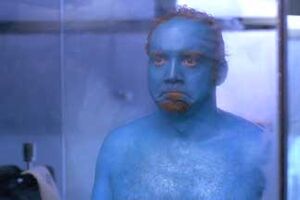 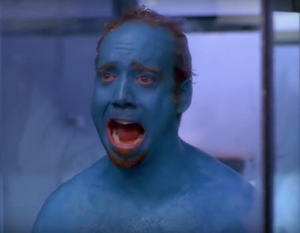 Marty screams in fear "OH, MY GOD!", turning to get angry. 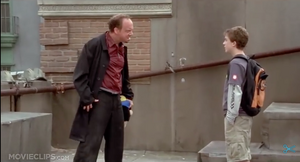 Jason tricks Wolf into exposing himself, thinking that no one heard it, but finds out that that everyone, including CEO Mr. Duncan has heard the entire confession on the camera. Wolf is therefore fired, sending his career right down the drain. 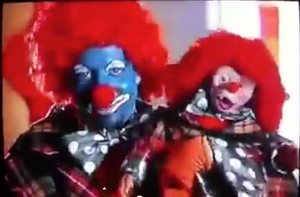 Wolf reduced to being "Wolfie the Clown"... 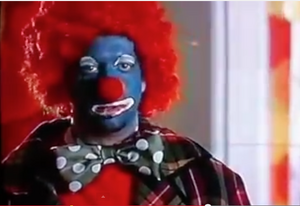 ...only to discover that the birthday boy is the son of the Masher—the monster truck driver he insulted earlier. 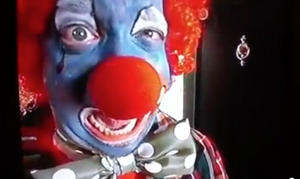 Wolf wincing as he gets the final taste of his own medicine—the birhday kid gives him the "nutcracker."
Add a photo to this gallery

Retrieved from "https://villains.fandom.com/wiki/Marty_Wolf?oldid=3435051"
Community content is available under CC-BY-SA unless otherwise noted.