Murder Chip, Rick, Pick, other Klayman and be the only Klayman alive (failed).

Marv is a recurring character in the Klay World series. Marv is a Klayman whose lives on the table and possibly had a lot of jobs. Marv was a hero, only to become a villain in the finale. Marv serves as a major character in Klay World: Off The Table, Klay World: The Rodent, and a supporting protagonist-turned-minor antagonist in Klay World: All Gone.

He was voiced by the creator himself Robert Benfer.

At the table, Marv shows the setup to Dr. Bob, then tells him that Handyman did all the work. Marv then asks Dr. Bob if knows how to work the walkie talkie, which he realizes doesn't work.

Marv asks a few Klaymen to put up an antenna to the set.

Later on, Marv contracted by Chip from the walkie talkie, Chip tries to warn Marv to get uncle Brown's time machine so that they could reverse time; but Marv refused to listen saying that he doesn't care and wants to hear about the aliens. When Chip explained that there weren't any aliens, he threw the walkie talkie on the ground and Rick destroyed it.

After that, the Aliens show up to the table, then King Womp the leader of the klay aliens explained why they showed up. after that, Marv and the other klaymen are killed by Kimp Womp and by the other aliens.

Later on, Marv was rebuilt by Dr. Bob, Chip, and Pick.

Marv is seen in the background talking to the other Klaymen, Chip says hi to Marv, he then tells Chip that "the hotdogs are over there".

After Chip learns the truth about the table and Chaos started, Marv walks up to Chip, Rick and Pick suggesting they leave. After leaving the table, they arrive at New Klay World. Marv tells the group that New Klay World was built by three Klaymen that they didn't know the table move, then that one of them stayed. After Chip tells the group about what Dr. Bob told him, Vince appears. After that, Vince was shot and killed by Marv. Marv tells the group that he liked the idea of being the only last Klayman alive. Before Marv was about to shoot them, he was shoved into a popsicle by Pick which kills him.

It is presume that Marv like any other Klayman, possesses durability and endurance. It is also shown that he is good marksmanship. 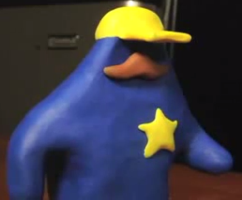 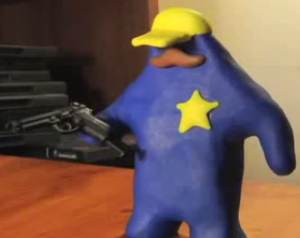 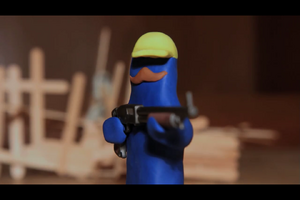 Retrieved from "https://villains.fandom.com/wiki/Marv_(Klay_World)?oldid=3440271"
Community content is available under CC-BY-SA unless otherwise noted.