Marvin Doyle, also known as The Vigilante, is a major antagonist in the crime-drama TV series Criminal Minds. He is a vigilante and serial killer who appears as the main antagonist of the Season 1 episode A Real Rain.

He is portrayed by Ethan Phillips.

Marvin Doyle worked as a court stenographer, often having to witness guilty people get acquitted of their crimes. In 2004, Marvin's parents were murdered in an attempted robbery. This triggered him and made him start constantly hearing the voices of the guilty people he had seen declared innocent. Wanting to make the voices stop, Doyle began murdering controversial defendants whose cases he had to transcribe. He started by killing a man acquitted of vehicular manslaughter and a woman acquitted of homicide.

Doyle's third kill was a cab driver who was charged with domestic abuse, but was acquitted. He took a ride in the cab to a desolate part of Manhattan, then when he got there, he shot the cab driver. The BAU were called in to help investigate the murders and deduced from the crime scene that the unsub was an insecure, but organized male who won't stop killing until he's caught. That night, Doyle waits for a priest who was charged with pedophilia, but was found not guilty. While waiting, an old woman starts speaking to him, asking if he's okay, but Doyle doesn't hear her. She leaves and Doyle gets into the confessional booth, opens the window and shoots the priest.

The BAU respond to the scene and interview the witness who tells them that the unsub's behavior was strange, like he was in his own head, and his hands were constantly acting like they were playing the piano. The witness also tells them about the pedophilia charge that the priest was acquitted of. After learning that, Hotch asks Garcia to look into the other victims' pasts for criminal records. Sure enough, each victim had a criminal charge that they were acquitted of. The first victim, Rachel Holman, accidentally killed her boyfriend with a heroin overdose. The second victim, Kaveh Surrani, was drunk-driving when he crashed his car into another and killed somebody. With this new information, the BAU profile the unsub as a vigilante.

While the BAU are having dinner at a Chinese restaurant, Doyle murders a man named Shawn Cooley who killed two cops, but was let off because the only witness to the crime was murdered. The next night, Doyle's crimes inspire a narcissistic security guard named Will Sykes to go out in the park looking for a criminal to murder. However, he kills an undercover cop and tries to take credit for Doyle's murders. Gideon is aware that it's not him and tricks him by asking him if the pedophilia charge was why he stabbed the priest in the groin. Sykes agrees saying the priest deserved it, unintentionally revealing that he's not the vigilante.

While looking in the Manhattan Criminal Courthouse, Morgan talks to a clerk and finds out that court transcripts are usually three months late, meaning that the vigilante shouldn't have known about Derbin's trial, unless he was apart of it. This eventually leads to Hotch asking Garcia to look up the court stenographer for each of the cases, which turns out to be Marvin Doyle. Hotch asks her to look and see if Doyle was ever apart of a violent crime which leads to them finding out about Doyle's parents. Now sure that they have their man, they go to the court house to find him, but he's called in sick.

The BAU go to his house, meanwhile Doyle stalks a man who murdered his parents because he claimed they were abusing him. The BAU dig through Doyle's transcripts and find the one he's targeting. Doyle follows Ted into his apartment and shoots him. He holds him at gunpoint, when the BAU arrive and point their guns at him. Gideon tries to reason with Doyle, and it seems like Doyle is surrendering, but Hotch shoots Doyle for unexplained reasons with the implication that killed him so Doyle wouldn't become a martyr. The episode ends with the press interviewing people; with some people claiming Doyle was a hero, some claiming he wasn't. 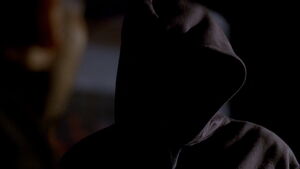 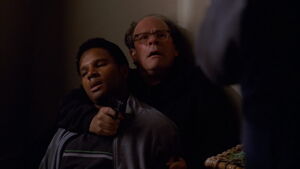