Survive the zombie apocalypse by resorting to cannibalism.

Mary is a character first encountered in Season 4 of AMC's The Walking Dead. She is a resident of Terminus and served as a minor antagonist in the second half of Season 4 and the beginning of Season 5.

She was portrayed Denise Crosby.

After Glenn, Maggie, Bob, Tara, Sasha, Abraham, Eugene, and Rosita arrive mad in Terminus, they encounter Mary with her back turned to them as she tends to a grill with large slabs of meat. She then welcomes them to Terminus. It was later revealed that Mary is a high-ranking member of Terminus. Mary and the others of the community offers Rick, Carl, Daryl, and Michonne a meal. However, Rick realizes that the attire of some of the residents belonged to his friends. On Gareth's cue, his men begin to fire upon them and one man accidentally hits and kills Alex.  Mary runs away as the battle begins.

Mary is first seen in Season 5 when a flashback whereas she is along with Gareth and Alex as they sit inside of a boxcar, revealing that the three were in a predicament similar to Rick's group until they took over Terminus for themselves. Mary finds Carol inside of the room with candles, ordering her to turn around and drop her weapons. Carol demands to know where the group is holding Rick and the others, shooting Mary in the leg when she doesn't cooperate. Carol doesn't kill her, but instead opens up the door, allowing a herd of walkers inside to devour Mary.

In a second flashback, it is implied Mary was raped by the attackers. 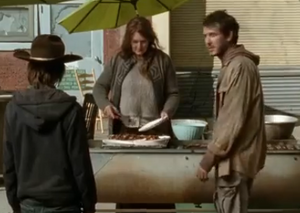 Mary is always seen cooking in Season 4.
Add a photo to this gallery

Retrieved from "https://villains.fandom.com/wiki/Mary_(The_Walking_Dead)?oldid=2836885"
Community content is available under CC-BY-SA unless otherwise noted.