Unleashing her son on innocent people.

Mary Barrows is the main antagonist of the videogame Clock Tower: The First Fear.

She planned the demise of many young people, unleashing Bobby Barrows as her main form of murder. She is referred to as "Ms. Mary" by Jennifer Simpson, Ann, Laura and Lotte. While she appears to be a caring woman at first, the girls later find out that Mary is an insane killer, who only pretended to care about them.

Mary Barrows gave birth to two twins, Bobby and Dan with the help of Dr. Walter Simpson in 1986. However, they were not normal twins, as they devoured Dr. Simpson's right hand. He immediately discovered that the children were demons, and they should have died. As a result, Mary had Dr. Simpson sealed in a padded room that was intended for her, where he died three days later of suffocation. Sometime before the first game began, she locked Simon Barrows in the shed within the courtyard of the mansion.

Mary adopted four orphan girls, Jennifer, Ann, Laura, and Lotte from the Granite Orphanage to live with her and Mr. Barrows at their mansion in Norway. When they arrived, she had them remain in the main foyer while she left. It is assumed she was scheming the demises of the girls, along with Bobby, to feed them to Dan.

She can be seen in many ways in the first game. In the telephone room, she can either "comfort" Jennifer by giving her a drink, which poisons her and locks her in the shed, where she later kills Lotte and tries to kill Jennifer. If Jennifer found out about her father's demise, Mary will simply try to kill Jennifer in the telephone room. Mary met her demise upon the clock tower (depending on the path chosen, she can either be flung off by ravens, thrown into the circuit board and shocked to death, or flung off the clock tower in attempt to kill Jennifer.) In some of the endings, Mary either kills Jennifer herself, or lives. Canonically, Mary was killed in the incident, as reports say that Jennifer was the only survivor.

Mary is a woman with a twisted mind, she has no feelings for anyone except her children. She is very intelligent and is capable of feigning benevolence in order to achieve her goals, although she can become hysterical if she gets angry.

Mary is a middle aged woman with a fair complexion with dark blond hair and blue eyes which during the game is collected. In her sprite, She appears as with lighter blonde hair and a white blouse and a purple dress. In the artwork, she wears a blue blouse with a green skirt, blue tights with green high heeled shoes. around her neck is a necklace. 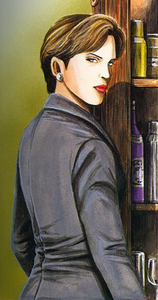 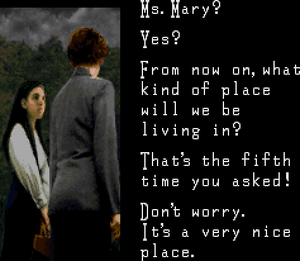 Mary with Jennifer in the opening scene.

Mary kills Jennifer with a shotgun. 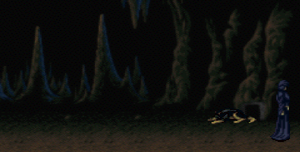 Mary, in a black cloak, walks past her guard dog in the cave under the mansion.

Mary attempting to strangle Jennifer in endings S and B.

Mary is electrocuted to death in Ending B.
Add a photo to this gallery

Retrieved from "https://villains.fandom.com/wiki/Mary_Barrows?oldid=4041099"
Community content is available under CC-BY-SA unless otherwise noted.