To remain alive and young forever.

Mary Brady is the widowed mother of Charles Brady and the main antagonist of Stephen King's Sleepwalkers. She and her son are life-draining, shapeshifting creatures known as the Sleepwalkers.

She was portrayed by Alice Krige.

Charles Brady and his recently widowed mother Mary are Sleepwalkers — nomadic, shapeshifting energy vampires who feed off the lifeforce of virgin women. Though they normally maintain a human form, they can transform (partially or fully) into human-sized bipedal werecats (presumably their natural form) at will. They are considerably more resilient than humans and have powers of both telekinesis and illusion. Their one weakness is cats, who are not only able to see through their illusions but whose claws are capable of inflicting severe to fatal wounds upon them. They also maintain an incestuous relationship (Although the reason remains unexplained, it may be the simple fact that they have lived so long with each other or the fact that they may be the last of their kind).

Charles and Mary have taken up residence in a small Indiana town called Travis, having recently fled Bodega Bay, California (where they used the aliases Martha Brodie and Carl Brodie) after draining and killing a young girl there. Charles attends the local high school, and there he meets Tanya Robertson in his creative writing class.

Tanya does not suspect the real reason why Charles is interested in her; to take her life force for both himself and his mother, who is starving. At first, it seems that Charles has genuinely fallen in love with Tanya (to the dismay of his jealous mother). On their first date, however, a picnic at the nearby cemetery, Charles attempts to drain the life force from Tanya while kissing her. Tanya tries frantically to ward off Charles by bashing his head with her camera, scratching his face, and ultimately plunging a corkscrew into his left eye.

As it happens, Deputy Sheriff Andy Simpson (who had earlier tried to pull Charles over for speeding and passing a stopped school bus, and seemingly trying to run down a young school girl) drives by the cemetery and notices Charles’ (now undisguised) car. When Tanya flees to him for help, Charles attacks Simpson and kills him. When Charles then turns to resume feeding off of Tanya, the deputy’s cat, Clovis, rises to the occasion and nearly kills Charles by scratching him in the face and chest. Mortally wounded by Clovis, Charles staggers back home to his mother who is able to make both of them "dim", i.e., turn invisible, and thus keep Charles from being arrested when the police storm their house.

Knowing that the only way for her dying son to survive is to feed, Mary attacks the Robertson household, killing the entire sheriff's department and severely wounding Tanya’s parents in the process. She kidnaps Tanya and takes her back to her house, where Charles by this time is all but dead. Mary revives him, and Charles makes a final attempt to drain Tanya’s life force. However, Tanya plunges her fingers into his eyes, killing him. Tanya manages to escape with the help of the sheriff who is later impaled by Mary on the picket fence surrounding the house. Several of the cats that had been gathering around their house throughout the movie, led by Clovis, jump on Mary and claw at her until she bursts into flames, killing her. Wallowing in her immense agony as she burns, Mary screamingly uttered her last words to Tanya Robinson, "You killed my son! My only son!", as if she blames the Robinson family for Charles' unfortunate fate. Her demise ends with Mary lying ablaze on her driveway and Tanya hugging Clovis, her savior.

According to Mary Brady long before her demise, she and Charles are not the last of their kind and she can sense the other unseen but remaining Sleepwalkers out in the world. 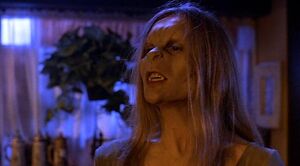 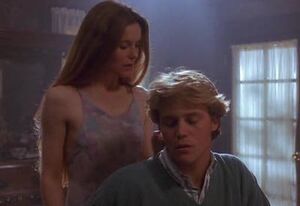 Mary Brady with her son Charles. 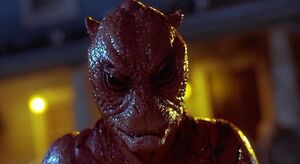 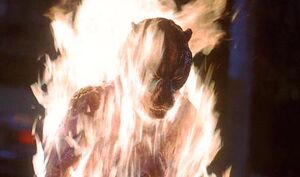 Mary's death.
Add a photo to this gallery
Retrieved from "https://villains.fandom.com/wiki/Mary_Brady?oldid=3987349"
Community content is available under CC-BY-SA unless otherwise noted.