Get revenge on Bill Nordham (succeeded).

Destroying all others who wronged her (partially succeeded).
Become Prom Queen again (succeeded).

She was portrayed by Lisa Schrage in Hello Mary Lou, and by Courtney Taylor in The Last Kiss.

Mary Lou was a popular girl in her school and is actively defying authority and sleeping with boys and using them to her own devices. She thinks only for herself and her dream of being Prom Queen.

In 1957 on Prom Night at Hamilton High, Mary attends with a rich boy name Billy Nordham, who gives her a ring with her initials on it. When he goes to get her some punch, he catches her making out with another boy name Buddy Cooper. Mary admits to using him and he storms off, before deciding to get payback by dropping a stink bomb, he acquired from the bathroom on her. When Mary is elected Prom Queen, she walks onto the stage, while Billy drops the bomb from the catwalk. To his horror and everyone else's horror, the bomb ignites in her dress, burning her alive. As Mary dies, she glares at Billy, realizing he's the one who killed her. 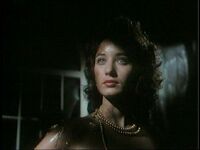 30 years later in 1987, Vicki Carpenter goes looking for a prom dress at the school, and finds a trunk containing Mary Lou's prom accessories, unwittingly unleashing Mary Lou's evil spirit. Vicki's best friend Jess arrives, and when she's alone, Jess takes a jewel out of Mary Lou's crown, and is murdered by the spirit. Her death is deemed a suicide, due to her being pregnant.

After Jess' death, Vicki has constant nightmares about Mary Lou, and suffers hellish hallucinations. She goes to Buddy Cooper, who is now a local priest. Buddy realizes the presence of Mary Lou's vengeful spirit, when his Bible burst into flames. Buddy goes to find Billy, who is now the principle of Hamilton High, and the father of Vicki's boyfriend, Craig. Buddy's warnings fall to deaf ears, as Billy refuses to believe the story.

When Mary makes Vicki hallucinate herself in Vicki's rival, Kelly Hennenlotter, Vicki slaps Kelly. In detention and in another hellish nightmare, Vicki is dragged into a liquid chalkboard and emerges, possessed by Mary Lou. During the possession, Mary visits and kills Buddy by stabbing him with a miniature crucifix. She later kills Vicki's other friend, Monica in the locker room. Mary also seduces Craig and knocks him out. She goes to Billy's house to taunt him and reveal her identity to him. Billy gets a gun after taking his son home, fearing Mary will get revenge on him through his son and knocks him out. While Mary is getting ready for Prom, she tries to seduce Vicki's father and kills her mother.

At the Prom, Mary enjoys the festivities, while Kelly, who wants to be Queen, preforms an oral sex on Josh, who is running the votes. Mary electrocutes Josh and rigs herself as Prom Queen. Craig arrives trying to stop his father from shooting Vicki, but is to late. He reaches to the apparently dying Vicki who transforms into the charred demonic corpse of Mary Lou herself, which heals back to her living self (but still has some burn scars). In the chaos, Kelly is killed by a falling light and Craig is chased into the prop room. A portal to the Underworld opens, and tries to suck Craig in, but Billy puts the crown in Mary Lou's head, apparently apeasing her spirit, releasing Vicki.

With Mary Lou gone, Vicki and Craig get into his father's car with him. Billy is suddenly wearing Mary's ring before driving off with Criag and Vicki, implying that he is possessed.

After the events of Hello Mary Lou: Prom Night II Mary Lou was condemned to Hell where she was forced to dance in a revealing outfit on a brimstone dance floor. At the opening of the film, she breaks free from her chains with a nail file. After escaping back to Earth, Mary encounters a janitor who she reconises as one of her old boyfriends, and kills him by exploding his peacemaker.

It turns out after Mary's rampage at the end of the second film, the Hamilton High School went around to rebuild their gym to get ready for a new Prom. At the opening of the new gym, the new principal Weatherball, accidental cuts off his fingers, and Mary tries to show her presence by blowing wind through the gym. At the school, a teenager named Alex Gray is aspiring to be a medical student, but is behind on his grades. One night, Alex leaves a date with his girlfriend Sarah to collect his text book at the school. There he encounters Mary who seduces him on the American flag.

Alex develops and unhealthy affair with Mary who helps him with his grades, and football skills, much to the anger of Alex's rival Andrew Douglas. Alex gets a hint of Mary's true nature when Mary kills his biology teacher for giving Alex a bad grade and has Alex bury his body. In addition to this, the affair puts a strain on his relationship with Sarah.

However, Alex's grades skyrocket and he makes honor role, much to the suspicion of his guidance counselor, Ms. Richards, who Mary kills with battery acid. At this point, Alex tries to draw the line by telling Mary not to kill anymore. Despite this Mary kills Andrew one the football field with a football turned spinning drill. Alex decides to break it off with Mary, much to her anger,

Alex tries to move on with his life by asking Sarah to Prom only to find out that she's going with nerdy student name Leonard Welsh. Alex also finds out that Mary is stalking him and goes to his friend Shane Taylor for help. However, Mary kills Shane and has Alex find his body. To make matters worse, Mary has framed Alex for Shane's murder and the other killings. Alex is arrested and on the night of the Prom, Mary goes to his cell after killing two officers. Mary gives Alex an ultimatum; join her or she will kill Sarah. Alex refuses and escapes to the Prom to rescue Sarah.

At the school, Mary kills Leonard and tries to kill Sarah who flees to the gym. Alex arrives and publicly confronts Mary, but agrees to go to Hell with Mary and be her eternal Prom King. Mary drags Alex to Hell but Sarah follows to rescue him.

Sarah finds herself in Hell which resembles a horrific version of Hamilton High, with it's own Prom going on. Sarah encounters zombified versions of Leonard, Shane and Andrew, but she fights them off with a makeshift flamethrower, but Mary attacks her with a jukebox that fires buzzsaw blades, which cuts one of the lines. At the "Prom" Mary is about to kill Alex but is confronted with Sarah, who uses whats left of the flamethrower to make a makeshift dynamite, and threatens to detonate the Prom. They manage to briefly incapacitate Mary before escaping into a garage and sealing a car just as the zombies begin to overwhelm them. As the car starts, Mary tries to stop them only to get run over.

Alex and Sarah apparently escape back to Earth and they stop at a restaurant to use a payphone. There, Mary appears and kills Sarah by ripping out her heart and Alex goes insane admitting Mary has won. 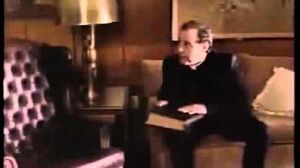 Retrieved from "https://villains.fandom.com/wiki/Mary_Lou_Maloney?oldid=3776306"
Community content is available under CC-BY-SA unless otherwise noted.