Entertaining people as a Ventriloquist (formerly).

End the bloodlines of all the Ashens and the other families as revenge for her death (succeeded).

Mary Shaw is the main antagonist of the 2007 supernatural horror film Dead Silence. She is an undead ventriloquist who has lost her voice and seeks vengeance against the small town of Raven's Fair.

Ventriloquism is the art of masking or throwing a person's voice, so that it appears as if it is originating from an alternate location. The transmission point of the manipulated voice is usually that of a doll or puppet.

Those who practice the art of ventriloquism are known as ventriloquists. Ventriloquism was used for stage show entertainment in which the ventriloquist communicates with his or her dummy, making lighthearted discussion for the enjoyment of an audience.

In the 6th century, people believed that the noises produced by the stomach were thought to be the voices of the dead taking up residence in the stomach of the ventriloquist. One ventriloquist of note was Mary Shaw, who was murdered in 1941, but her spirit continued to influence the living world via her dolls. In death, Mary Shaw had her body cosmetically altered to resemble a ventriloquist dummy and had her soul stored inside all her dolls, so she'd always return and never truly die. To hide her undead nature, she hid behind an alter ego known as Ella.

Mary Shaw was born in the year 1869. As a child, she had no friends, only her dolls. As an adult, she became a very authoritative and successful ventriloquist. Single and with no family, Mary amassed a huge collection of ventriloquist dummies, totaling more than 101, each with their own specific name and personality. She cherished her dolls so much, that she regarded them as her children. One of her favorite dummies was named Billy.

During the late 1930s and early 1940s, Mary performed her vaudeville stage act at the illustrious Guignol Theater in Ravens Fair. She performed nearly every night and lived out of her dressing room in the theater. During one particular show in 1941, a young attendee named Michael Ashen rudely remarked about how he could see Mary's lips move during her performance.

Mary tried to restrain her embarrassment, and voiced her frustration through Billy the Doll. As Billy, Mary defended the idea that both the doll and she were two separate people. During the course of this conversation, their voices even began to overlap one another. She ended the performance by directing a cold stare at Michael Ashen saying, "Now who's the dummy?" Behind closed doors however, Mary could not forgive the rude child's disbelief. Her rage grew to the point that she kidnapped Michael Ashen and hid him away.

When the boy's disappearance garnered notice throughout the town, the locals immediately suspected Mary Shaw. Members of the Ashen family, as well as other families, stormed her dressing room at the Guignol. They murdered her by forcing her to scream and then ripping out her tongue, silencing the ventriloquist's voice forever, or so it seemed. Mary's body was taken to the Walker Funeral Home for burial arrangements. As per her will, she wanted her remains to be cosmetically altered to resemble a doll.

The director of the funeral home Richard Walker conceded to Mary's wishes. Also, her will requested that all 101 of her dolls were to be buried beside her in individual caskets. This wish was also granted and Mary and her dolls occupied a far away corner at the Ravens Fair Cemetery. The story of Mary Shaw did not end with her death however. Her spirit rose from the grave and sought to avenge itself against the families of Ravens Fair. Working through her dolls, she haunted the townsfolk, murdering numerous people.

Over the span of decades, Mary continued to silence those in the community by murdering anyone who screamed upon seeing her. Bodies were discovered with sunken, ashen faces; their tongues forcibly removed from their bodies. Mary soon became a figure of local legend and the people or Ravens Fair feared to even speak her name. A nursery rhyme circulated amongst Ravens Fair's children, warning them against the actions of the angry ghost: "Beware the stare of Mary Shaw. She had no children only dolls. And if you see her in your dreams; be sure to never ever scream.".

During the events of the movie

Mary Shaw had secretly created the "perfect doll", a life-size puppet that looks like an actual human woman named Ella Ashen. Through Ella, she was able to gain revenge against the surviving members of the Ashen family, namely, Ella's husband Edward Ashen, his son Jamie, and Jamie's wife Lisa. Drawing upon her own knowledge of doll making, Mary/Ella murdered Edward Ashen and turned him into a human puppet.

Ella was able to use ventriloquism to make it appear as if the man were still alive. Mary's next victim was Henry Walker, son of funeral home director Richard Walker. She lured Henry into a trap by using the voice Henry's wife Marion as bait. Henry was killed in a manner similar to all of her other victims; with his tongue torn out of his throat. Later she attacked Jamie and Detective Jim Lipton at the old Guinore Theatre when they both discovered the body of Jamie's great uncle Michael Ashen.

Jamie then threw a lantern at the glass-encased collection of Mary Shaw's dolls as they screamed like real children dying in burning agony. She continued in her path of revenge. Detective Lipton became her next victim. When Jamie returned to try destroy Billy after he saw Marion with the corpse of her beloved husband Henry. Mary Shaw suddenly appeared and attacked him. He threw Billy into the fiery chimney and Mary's ghost disappears into shadows. Jamie then saw his father, only find that he is dead. Ella appeared behind Jamie and said the same frightening words of Mary Shaw "Now, who's the dummy?" and laughs. Jamie, now finally frightened, then screamed and died, the last of the families of Raven's Fair.

In an alternate ending, Ella simply knocks Jamie out after he discovers his father was a puppet all along. Then, she explains that the original Ella was a human being with Edward as an abusive husband. Edward knocked her down the stairs, and killed their unborn child.

Ella dug up the grave where the puppet Billy was buried, and became possessed by Mary Shaw. Afterward, Ella makes a family photograph, and then, dressed as Mary Shaw, tells a bedtime story to a child by candlelight, later revealed to be an traumatized and unresponsive but still-alive Jamie with his voice copied and tongue ripped out (or would have been had they added the visual effect planned).

This story is the poem. Ella relates that only silence can save you from Mary Shaw and then blows out the candle, ending the movie. 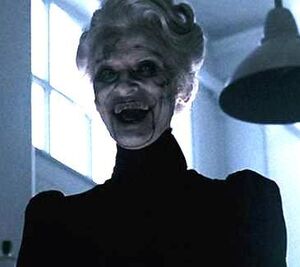 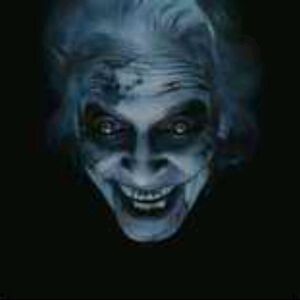 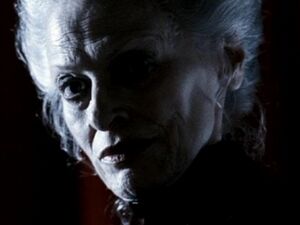 Mary Shaw prior her death. 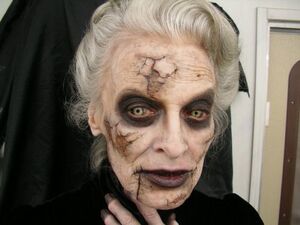 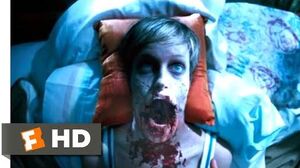 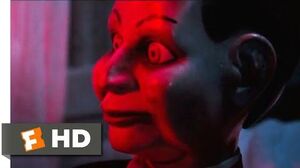 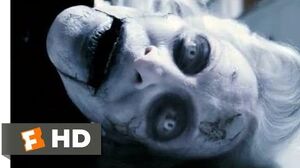 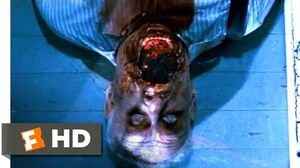 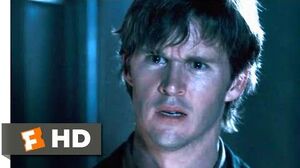 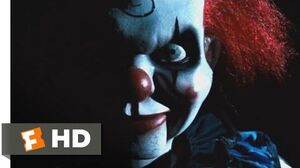 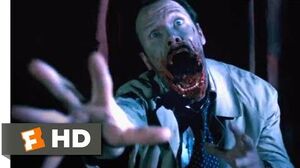 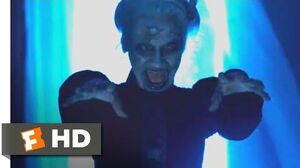 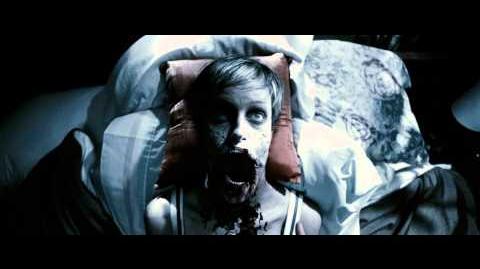