She was portrayed by Heather Lind.

Mary Wells was Ichabod Crane's former fiancee, but she was insanely jealous of Katrina—to the point where she believed that she was seducing Ichabod away from her. Mary later confronted Katrina with her accusations, which ended with Mary accidentally falling off a cliff to her death.

For over two centuries, Mary haunted the exact location where she died, until she was summoned by Henry Parrish.

In her ghostly "Weeping Lady" form, Mary killed Caroline, who made an advance at Ichabod, and tried to kill Abbie as well. She again tried to go after Katrina, but she managed to escape and reunited with Ichabod and Abbie. Soon, Ichabod went on finding Mary while Katrina and Abbie casting a spell. After finding Mary, Ichabod said to her that all he wanted to make Mary free from Henry's spell. Before she could spoke about the real reason of her spirit haunting the Sleepy Hollow, Mary was struck by Ichabod's arrow given by Nick Hawley, but she did not died. Enraged, Mary ignored Ichabod and rushed to Katrina and Abbie, before the curse was broken and Mary returns to her human form. Ichabod believed Mary will never harm him, so he rushed to the dying Mary and ask her about the reason she stayed at the Sleepy Hollow. As an answer, Mary only pointed at Katrina in anger and sadness, before she passed away for the second and final time. 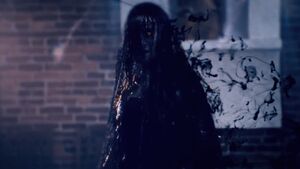 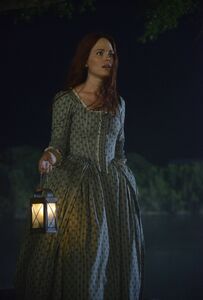 Retrieved from "https://villains.fandom.com/wiki/Mary_Wells?oldid=3528988"
Community content is available under CC-BY-SA unless otherwise noted.