The Maryville Cemetery Ghosts are minor antagonists in the 2019 horror film Annabelle Comes Home, the seventh installment in The Conjuring horror film series. They are enigmatic spirits that dwell in the cemetery they are presumably buried in, and are drawn to the spiritual dark power of Annabelle the Doll.

One of the ghosts was portrayed by Sheila McKellan.

While it is unknown who exactly any of the ghosts are, it is known that they were likely residents of Maryville or of nearby areas, and were buried in the cemetery after they died. For whatever reason, they did not move on to the afterlife, leaving them as restless spirits.

After paranormal investigators and demonologists Ed and Lorraine Warren acquire Annabelle the Doll, they begin driving it home to their home in Connecticut. On their way there, an accident alters their course, and they are forced to take a side road past the cemetery. While in front of the cemetery, the car breaks down, and Ed gets out to fix it. While she is waiting, Lorraine hears the ghost of a girl in the car, remarking how she likes the doll. Lorraine attempts to communicate with the ghost, which she believes to be the victim of the accident. She attempts to get a better look at the ghost girl, but she vanishes. Lorraine then looks out the window and sees the ghosts in the cemetery, watching her.

When Lorraine looks back ahead, she sees the ghosts crowded around Ed. With little warning, one of them pushes him into the path of an oncoming truck before vanishing. The truck driver and Ed are able to react in time and leave Ed unharmed, but Lorraine notes that the Annabelle doll is a beacon for spirits, and was likely commanding the ones from the cemetery. The Warrens take the doll back home, and lock it behind holy glass.

A ghost in the Warrens' car.

The ghosts before attacking Ed Warren. 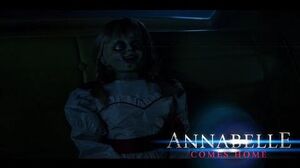