Member of the Brewers

Carrying out missions for the Brewers.

Be reunited with his brother Akihiro

Related to Hero
Masahiro Altland is a "Human Debris" mobile suit pilot of the Brewers and a minor antagonist in Mobile Suit Gundam IRON-BLOODED ORPHANS. He is the younger brother of Tekkadan member Akihiro Altland.

He is voiced by Seiichiro Yamashita in the Japanese version, and Chris Hackney in the English dubbed version.

While he was a child traveling through space with his family, their trade ship was attacked by the Brewers and both his parents were killed. Masahiro and his older brother Akihiro were kidnapped by the pirates and trafficked for money as Human Debris. Akihiro was later bought by the Chryse Guard Security company and separated from his brother, though he vowed to Masahiro he would find him and come back for him. Masahiro stayed with the Brewers and was assigned as one of the Man Rodi's pilots, having an Alaya-Vijnana System implanted to bolster his piloting ability. He remembered Akihiro's promise to find him, but the years of abuse he suffered at the hands of the Brewers caused him to become pessimistic and self-loathing.

Masahiro took part in the Brewers' mission to capture Kudelia. He managed to capture a Mobile Worker piloted by Takaki but when Akihiro showed up to rescue it, the two contacted-linked. To both their surprises, Masahiro realized his brother was fighting him and released Takaki's Mobile Worker, before being attacked and driven off by Azee. After returning to the Brewers ship following the failed attack, Masahiro was punished by Kudal for letting a member of Tekkadan go and was harshly beaten.

In the next battle between Tekkadan and the Brewers, Masahiro was confronted by Akihiro again, who hoped to persuade his brother to leave the Brewers and join Tekkadan. Masahiro told his brother that nothing would change even if they were together because they're both Human Debris, but Akihiro tried to persuade him to return with him to Tekkadan, telling him that they would accept him and be his family. However, this failed when Akihiro inadvertently told Masahiro that he had gave him up once. However, Masahiro misinterpreted Akihiro's statement as saying that he had completely abandoned him and, accepting his fate as Human Debris, attacked Akihiro again.

However, when Kudal Cadel in Gundam Gusion tried to attack Akihiro's Graze Custom, Masahiro sacrificed himself to defend by pushing the Graze Custom away so Gusion's attack hit his unit's cockpit, fatally wounding him. Before dying, Masahiro shared some words with his brother and held hands with him for a final time. 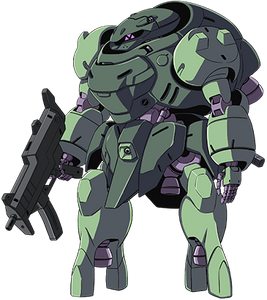 UGY-R41 Man Rodi
Add a photo to this gallery

Retrieved from "https://villains.fandom.com/wiki/Masahiro_Altland?oldid=3814802"
Community content is available under CC-BY-SA unless otherwise noted.