Prevent himself from further assassination.

Paranoid Mobster
Masahiro Hayamoto Sr. is a major antagonist of Hitman: Silent Assassin. He was the head of a Yakuza clan of a crime syndicate known as Yamaguchi-Gumi.

Hayamoto's past history is unknown. At some point, he became the leader of his local chapter of the infamous crime syndicate, Yamaguchi-Gumi. Being the leader of said group, Masahiro primarily generates his income from pornography, smuggling of goods, narcotics (primarily amphetamines) and arms dealing which is his favorite source of income.

Around the 1960's, his only son, Masahiro Hayamoto Junior was born. In 1988, Hayamoto was shot in the neck by a rival Yazuka clan's member but survived. To ensure his own safety from assassination attempts, he inhabited a six-story Katsuyama-jō castle, which was guarded by highly-trained shinobi ninjas, snipers and the latest electronic security measures.

Given this penchant for weaponry, Hayamoto spent a lot of time with them, even acquiring a missile guidance system. The client of ICA was infuriated, so he signed up a contract to have Hayamoto eliminated and the guidance system recovered. For this to happen, Agent 47 must first kill his son Hayamoto Jr. at his remote private estate and implant a transmitter in his corpse.

After Hayamoto's guards bring his son's remains to his home, 47 infiltrated the caste with the help of Mei-Ling, whom he once met in Lee Hong's lair. Then, 47 killed Hayamoto inside his own room and escaped via his helicopter.

In HITMAN (2016), Hayamoto's photo was discovered in the Shadow Client's milliant basement, which could be found alongside the photos of Alvaro D'Alvade, Winston Beldingford, and Alistair Beldingford. 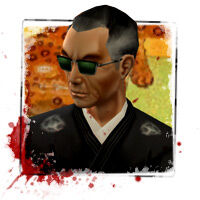 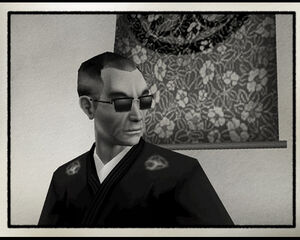 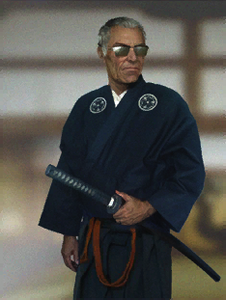