Establish a deal with Tanaka Kusahana.

Perverted Criminal
Masahiro Hayamoto Jr. is a minor antagonist in Hitman: Silent Assassin and the target in Tracking Hayamoto. He is the son of Masahiro Hayamoto, an arms dealer boss and Yazuka leader.

Like his father, Hayamoto Jr. was involved in the family business and had many meetings and deals with Yakuza bosses. Hayamoto Jr. is about to establish a deal with Tanaka Kusahana, a Yakuza leader, in his private estate.

Masahiro Jr. is shown to be a sexual fantasist at the level's introduction, as according to security footage, he and Kusahana eat off sushi pieces on a bikini clad maid's stomach in the dining room. He was poisoned by Agent 47 via poisoned Fugu sushi in order to make his father to come out, paving ways for 47's assassination against Hayamoto Sr.

In the "Legacy" trailer of HITMAN (2016), Hayamoto Jr. was one of the 47's previous targets shown in Lucas Grey's flashback, and he was canonically shown as being poisoned by 47, who dressed up as the waiter and served Fugu sushis to him. 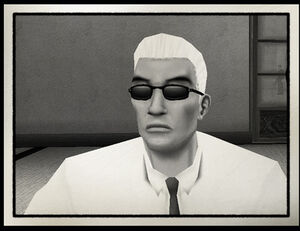 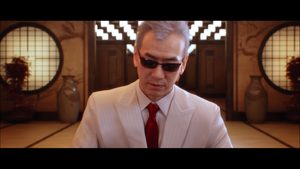 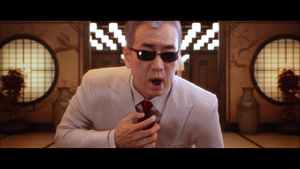 Hayamoto Junior's death in HITMAN (2016).
Add a photo to this gallery

Retrieved from "https://villains.fandom.com/wiki/Masahiro_Hayamoto_Junior?oldid=4207932"
Community content is available under CC-BY-SA unless otherwise noted.