Corrupt Official
Masamitsu Yuto is an anti-HumaGear politician on the payroll of ZAIA Enterprise and a minor antagonist in Kamen Rider Zero-One.

He was portrayed by Gou Oshio.

Masamitsu Yuto was ZAIA's candidate for the fifth and final round of the Workplace Competition, in which they had to sway the public's opinion on a referendum on whether to rebuild Daybreak Town into an autonomous city populated by HumaGears. His opponent was Hiden's rapper HumaGear MC Check it Out. At first the competition seemed to be going in Hiden's favor. Yudo gave a speech to a crowd of people filled with ZAIA plants that made it seem like Yuto had lots of it support, but MC Check It Out's music video expressing peaceful coexistence between humans and HumaGears proved popular with the youth. Later on, Aruto and Check It Out exposed and caught footage of Yuto taking bribes from ZAIA, which they intended to expose to the public.

During a televised debate between Yuto and MC Check It Out, Aruto and Check It Out revealed the footage, but Yuto claimed the footage was doctored and accused Hiden of making a fake HumaGear in his image to frame him. As Check It Out became angry over being framed as a liar by Yuto, Gai Amatsu pulled out a ZetsumeRiser and secretly handed it to Check It Out, who used it to become a Dodo Magia. Gai then had Yua transform into the Fighting Jackal Raider and battle the Magia to demonstrate the power of Zaia's new product, the RaidRiser. Aruto transformed into Kamen Rider Zero-One and attempted to interfere but Gai became Kamen Rider Thouser and held him off long enough for Yua to destroy MC Check it Out. Gai then declared to the crowd that had gathered that this was proof of ZAIA's superiority.

Yuto would succeed in his endeavor to ban HumaGears, with the public voting overwhelmingly against rebuilding Daybreak Town. Thus, ZAIA claimed victory in the fifth and final round and thus won the competition 3-to-2, allowing them to go through with fully acquiring Hiden Intelligence. 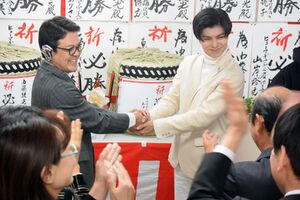 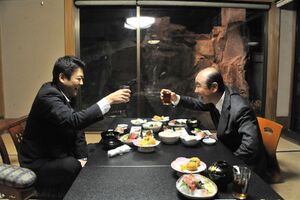 Yuto dining with one of his associates. 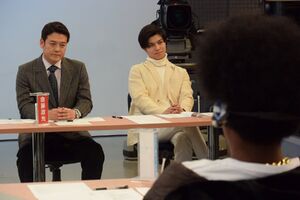 Yuto at a press conference with Gai Amatsu. 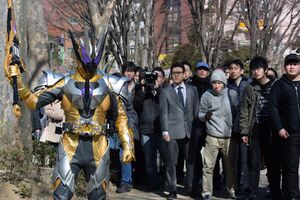 Retrieved from "https://villains.fandom.com/wiki/Masamitsu_Yuto?oldid=4319792"
Community content is available under CC-BY-SA unless otherwise noted.