Founder and CEO of Genm Corp
Leader of Bugsters

Use Kamen Rider Chronicle to gain control of humanity and take over the world.
Kill Emu Hojo and his friends.

He is the true mastermind behind the outbreak of the Bugsters, secretly exploiting the virus to gather subjects for his plan. His ultimate goal is to become the controller of everybody's lives by trapping everyone within the augmented-reality game Kamen Rider Chronicle. Using the Buggle Driver II and the Kamen Rider Chronicle Master Gashat, Masamune can transform into Kamen Rider Cronus.

He was portrayed by actor and singer Hiroyuki Takami.

16 years ago, Masamune Dan learned of the existence of the Bugster Virus from his son, Kuroto Dan, who discovered it after it emerged from the Y2K crisis. Unbeknownst to everyone but himself, Masamune infected himself with the virus to develop an antibody for it within him.

Masamune at some point partnered with Kiyonaga Hojo, who is Emu's father and the president of a medical equipment company, to develop a way to combat the Bugster virus. However, Masamune eventually figured out that Kiyonaga was responsible for the emergence of the Bugster virus, having inadvertently created it when he ran simulations on the Y2K with his medical equipment. With this, Masamune blackmailed Kiyonaga into helping him create Kamen Rider Chronicle and to hand over his son Emu to Kuroto for experimentation.

After Kuroto caused Zero Day and pinned the blame on him, Masamune willing took responsibility and allowed himself to be incarcerated in order to absolve him of guilt for the events that would follow. In his place, Kuroto would step up to become CEO of Genm though, unbeknownst to him, his father was secretly using him to further his own goals.

Masamune was eventually released from prison, allowing him to retake control of the Genm Corp. He walked in on the final battle between the Riders and the Bugsters and revealed himself as the true mastermind behind Kamen Rider Chronicle, having used Kuroto and the Bugsters as pawns to complete it. Masamune then transformed into Kamen Rider Cronus and used Cronus' "pause" ability to freeze the Riders and Bugsters. As they were frozen, Masamune attacked each one of them before coming to the Lovelica Bugster. Declaring that Toki Meki Crisis was no longer in stock, Cronus killed Lovelica and froze him in a permanent state of "death", trapping the Bugster from being able to come back. Cronus then unfroze time and departed as his attacks hit each of his targets.

Masamune blackmailed Hiiro Kagami into turning to his side with Proto Drago Knight Hunter Z, which had his girlfriend, Saki Momose, sealed inside of it. After much reluctance, Hiiro accepted the offer and betrayed Emu and Kuroto by preventing them from stopping the Pause ability of Cronus.

With Hiiro's assistance, Masamune revived Kiriya Kujo so he could become observant for the players of Kamen Rider Chronicle and prevent the doctors from stopping its progress. However, reviving Kiriya turned out to be Masamune's biggest mistake, as Kiriya revealed that his true purpose was to make an opening so Emu and Kuroto would create a new way to defeat him.

Cronus was later defeated by Ex-Aid Muteki Gamer. Angry at his defeat, Masamune threatened to kill Saki if Hiiro could not control Taddle Legacy. Masamune later overheard Hiiro being called by his father, who pleaded with him to perform a heart operation to save Taiga's life. Masamune ordered Hiiro to sabotage the heart surgery or he would delete Saki. Hiiro went to go perform the operation, while Emu attempted to save Saki from Masamune.

Cronus later went after Parado and Graphite to eliminate them. However, Graphite had incubated the Gamedeus virus within himself, allowing him to neutralize Cronus's "Pause" ability. However, Cronus managed to defeat the Bugsters by controlling the Energy Items. Before he could eliminate them, Genm and Lazer Turbo showed up to rescue Parado. Masamune gloated to the two that he had told Hiiro to intentionally kill Taiga, and mocked Emu by saying that Hiiro would fail. However, unable to go back on his integrity as a doctor, Hiiro instead successfully completed the operation and restored Taiga. Infuriated by his underling's betrayal, Masamune erased Saki's data. Emu and Hiiro transformed to attack Cronus, but Masamune retreated using the Bugvisor II after being beaten down, leaving Hiiro to weep for his lost love.

Masamune Dan later reprogrammed Gamedeus' data to spread the Bugster virus, plotting to spread the virus worldwide to digitize the entire world with the virus so he could reign over everyone as god. However, Lazer Turbo and Genm counter this by developing a vaccine that neutralizes the virus. His scheme to instigate another global pandemic failed, Masamune finishes off Gamedeus and absorbs his remains into his body, turning himself into Gamedeus Cronus.

With his new form, Masamune causes another pandemic with a strengthened version of the Gamedeus virus and attempts to kill Nico Saiba, as she is the only player who can face the end boss of Kamen Rider Chronicle. To save Nico, Taiga becomes Kamen Rider Cronus an duels Gamedeus Cronus, but the Bugster-human hybrid overpowers him and knocks him out of his transformation. As Taiga is defeated, Emu and Hiiro arrive to assist as well and assume their Kamen Rider forms. Together, the three Kamen Riders managed to stand up to him, only for Masamune to transform into Super Gamedeus to further spread the pandemic.

However, Poppy sacrifices herself to strengthen the Gamedeus virus vaccine, allowing it to reach and cure the humans infected and turned into Gamedeus' horde. The Riders then battle Super Gamedeus again and revert back to their Level 1 forms, allowing them to separate Masamune and Gamedeus. With Gamedeus on his own, Parado sacrifices himself to destroy Gamedeus with the Doctor Mighty XX Gashat.

Masamune then transforms into Kamen Rider Cronus to fight the Doctor Riders one more time. While holding his own at first, Cronus ends up being overwhelmed by the Riders once they switch to their Level 2 forms, with Emu delivering the final blow. Defeated and knocked out of transformation, Masamune decides to have the last laugh by killing himself out of spite, preventing any of the eliminated players from being saved.

Masamune appears in Another Ending trilogy as a supporting character. After Masamune's demise, Kuroto Dan instigated his escape plan and managed to escape from his prison. After escaping, Kuroto found and worked with Dr. Saiko Yaotome, who is in fact the daughter of Michihiko Zaizen aka Dr. Pac-Man, the deceased former leader of Next Genome Institute. Using Saiko's desire for vengeance and her hatred towards Bugsters, Kuroto made brought Masamune back to life as a Bugster using his data, so that they would extract the Bugster Virus in Masamune and bring it into its manifestation, resulted in creating Black Parado in process.

During Saiko's experiment, she took then Poppy to a clothes store which Masamune Dan had also taken his wife Sakurako Dan just prior to the birth of their son. Poppy wore the dress in the same style which Saeko once dressed, and had a vision of Masamune, before becoming a heartless megalomaniac, happily taking photos of his wife.

Meanwhile, after creating Black Parado, Kuroto tied his imprisoned father on a pillar with Level 0 program. Kuroto revealed his plan in front of his father and spitefully humiliated him, forcing him to atone for his crime of exploiting his very own son. However, much to Kuroto's shock, Masamune only claimed that the only past deed he ever regretted was the birth of Kuroto. Disappointed, Kuroto later left his father to rot after absorbed the data of Black Parado and created the Gashat of God Maximum Gamer Level 1000000000 as a result, before returning the Buggle Driver II to his father.

Determined to stop his son's mad plan, Masamune tried hard to break free and managed to transform into Kamen Rider Cronus once more. After defeating a Zombie Player, Masamune teleported himself to Kuroto's game area, right on time to rescue a near-defeated Kiriya. Disgusted over Kuroto's madness, Masamune decided to discontinue Kuroto by himself. Kuroto tried to convince his father into give in and restore every victims data back to normal - data that have been restored because of the game's reset. However, Masamune refused. Kuroto then asked if he never cared about Sakurako anymore, but Masamune said he would always remember her and had moved on from her death.

Then, they started to battle, but Kuroto soon defeated his father when Masamune's Pause proved to be useless against Kuroto's game area set in universe. Kuroto soon left after defeating his father, leaving the latter to die. In his final moment, Masamune asked Kiriya to trust him for the final time, saying he must stop Kuroto and still believing his son should never be born. After that, Masamune died once more and became data within Buggle Driver II once again. Kiriya later used the data left by Masamune to render Kuroto's God Maximum Gamer useless.

Masamune Dan does not appear in this novel, but his crimes are further brought to light. It is revealed that Masamune originally partnered with Emu's father Kiyonaga Hojo to develop medical equipment capable of fighting the Bugster virus, but soon found out about his role in creating it and blackmailed him into assisting with the development of Kamen Rider Chronicle, forcing him to hand over his son Emu for experimentation by Kuroto.

In Kamen Rider Zi-O, due to the alterations of the timeline by the Time Jackers, Masamune Dan became just an ordinary CEO rather than the maniacal control freak he was in Kamen Rider Ex-Aid. He was killed in 2016 by Kuroto Dan so he could usurp his father's power.

Though he keeps up the guise of an affable and benevolent businessman, Masamune's true personality underneath is that of a self-centered and manipulative sociopath who cares for nothing but his own goals, being willing to kill thousands of people in order to achieve them. He addresses each of the Kamen Riders and Bugsters by the Rider Gashats they use or in the game they originated from, viewing them not as living beings but as products of the Genm Corp and even refers to killing them off as "discontinuing a product".

For the first half of the series, Masamune keeps up the facade of a well-meaning CEO and father while he is behind bars and Kamen Rider Chronicle is in development. However, after he is released from jail and his plans start to come to fruition, Masamune reveals himself to be a tyrannical control freak who believes he has the right to control everyone's fates and is willing to do whatever it takes to see the end result of his goals, including resorting to underhanded and deceitful tactics.

Even after he has been defeated, Masamune clings to his belief that he is the controller of everyone's lives, and kills himself purely out of spite to preventing the victims of Kamen Rider Chronicle from being saved.

A more humane side of Masamune was explored in Another Ending trilogy, where it is revealed that Masamune was once a loving man who genuinely cared about his wife, before he eventually turned insane because of her infection of Bugster virus. He was also horrified by Kuroto's plan and insanity, and he would stop him no matter what the cost. However, Masamune still refuses to show remorse over his manipulation over Kuroto. Instead, he only curses his son, wishing the latter was never born. 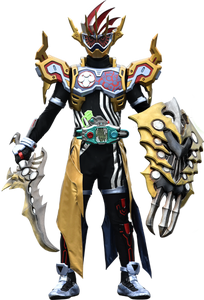 Gamedeus Cronus
Add a photo to this gallery 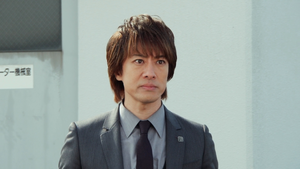 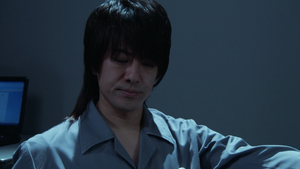 Masamune while being imprisoned 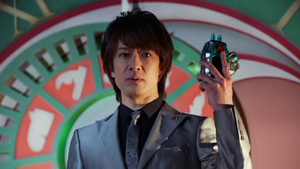 Masamune's proclamation before he transforms to Cronus. 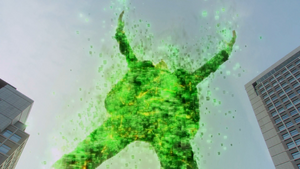 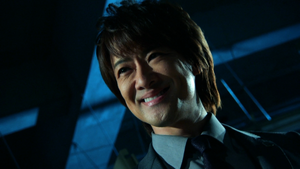 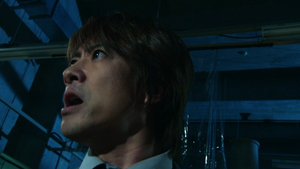 Masamune requires Hiiro to kill Ex-Aid permanently, after being defeated by Muteki Gamer. 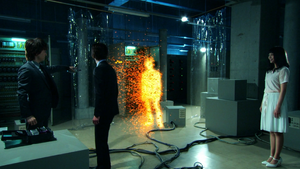 Masamune reviving Kiriya Kujo.
Add a photo to this gallery 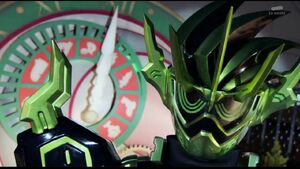 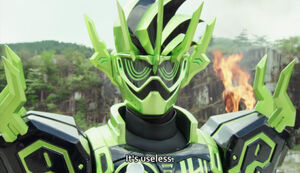 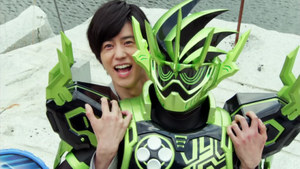 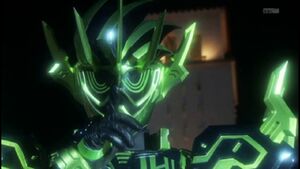 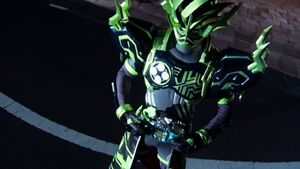 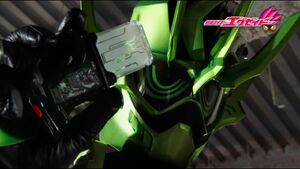 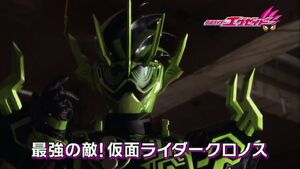 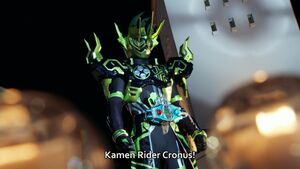 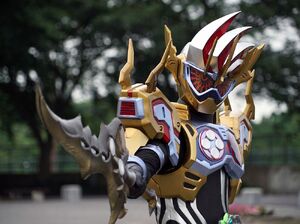 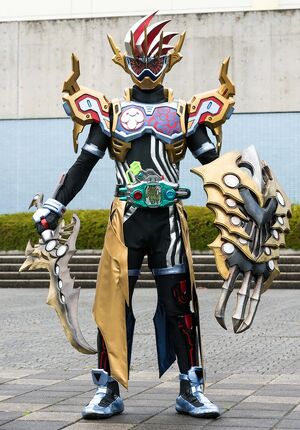 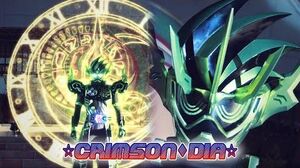 Retrieved from "https://villains.fandom.com/wiki/Masamune_Dan?oldid=3922290"
Community content is available under CC-BY-SA unless otherwise noted.