To conquest of Japan (failed).

Masamune Kurohabaki is the main antagonist of Ginga Densetsu Weed: Orion. He is the adopted son of Terumune Kurohabaki and Yamabiko's big brother. He is enemy of Orion, one of Weed's children.

He is a orange-brown unknkown dog. He have human bristle. Masamune had been wearing his scarf and leggings for his former owner, Jinemon Kurohabaki.

When Masamune was still a small puppy, Terumune trained him hard and carried out a strength test where the puppy had to climb up the cliff to his father. Masamune trusted his father, but Terumune struck him down with mercy once and again. Eventually, Masamune wounded his hind legs and did not succeed. Masamune could not understand why his father treated him so cruelly. The people of Terumune comforted the puppy and reported that it was Terumune's way of showing that he cared. Especially Masashige liked Masamune.

After a few years, Terumune chose his son as his successor, although Yamabiko had not even tried the strength test. Terumune saw the evil in Masamune, believing this to be only a force, though the true leader should also be able to love. Masamune was shocked and angry: he believed Terumune hate him for his appearance. With revenge, he deported his father and snatched power in the clan. He also sent assassins to kill Shikoku's escaped brother.

After the volcanic eruption, Masamune takes Ōu's paradise under control and builds an ever larger dog army by attracting dogs in nearby areas. His subordinates kill all who refuse to join his pack. When he meets a man unnecessary for the clan's goal, Masamune pushes Jinemon down the cliff.

Orion meets Masamune for the first time as he attacks Masamune's fortress with Kisarag's sons, to defeat Kisarag's death. Orion tries repeatedly to attack Masamune, but each time Masamune hits him back down. This reminds Masamune of his past when Terumune used a similar tough training method for him.

Masamune plans to follow the example of the late Masamune Daten, Kurohabak's original leader, and conquer Japan as a whole. Masamune leaves Ōu to assemble a larger army.

When Masamune arrives in Niigata to make Nokizar his ally, wakagashira immediately begins to meditate on this and wants to join the Kurohabak side. Kenshin, the leader of Laumahowever, refuses and orders Masamune to leave. Masamune whispers to the wakagashire that he can show his loyalty by taking Kenshin's head. Masamune invites all of his troops to besiege Nokizar, so the fearsome wakagashira turns against Kenshini and says he is serving Masamune. Then Masamune grabs wakagashira and commands his subordinates to kill this, saying he is useless to both him and Kenshin. Masamune is about to leave so far, saying he did not come to destroy Kenshini. Kenshin asks why he wants to rule the whole country. Kenshin says that land can not be controlled by killing and committing other crimes. Masamune replies that land can only be developed when it is dominated, and that someone has to take control of the chaos.

The Masamune and Kenshin troops combine and the 300-strong army is attacking Tochigi, led by Tessin. At the same time, he expels Masashigen, who failed to destroy Tessin's troops. Masamune is injured when Tessh strikes him with Battōga and ends up scouring to the hot springs of Matheus to heal his wound.

When he improves, Masamune moves to the Tenkan Territory but can not get this ally but the enemy. Masamune captures Tenkan's spy, Shirō, and tries to torture him. The second man in the tank, Gennai, comes in and Masamune nearly hangs her on her scarf. Masamune's flock tries to trace the Tenkan flock, but finally gives it a chance.

Masamune and his nearly 400-year-old army decide to go to Shikoku to kill Yamabiko, but he can hear Yamabiko's packs returning to Honshu and allied with the Ōu troops. Masamune's packs return to Honshu and attempt to pass through Nagano, but Sanada Nyūdōunsai does not allow penetration of its territory and Masamune has to retreat. Masamune thinks he might be destroying Sanada's forces or looking for an army of Ōu.

Masamune decides to return to Ōu and declare war after hearing that Gin and other old Ōu warriors have been released from the mines.

In the final battle, Masamune defeats the enemy by giving his scarves to Matheus. He climbs up the cliff wall to attack Ōu's nest against puppies and bitches, but he is noticed. Many dogs, including Andy, Orion, and Akakamakiri are trying to drop Masamune down but fail. Masamune jumps into the river to avoid Ōu's army, and Orion and Gin leave after him. Masamune can still get out of the water and continue climbing. Upon getting up, Masamune tries to attack Yamabik and kills him, but Rigel comes in. Masamune and Rigel attack each other using the same ninetechnics Terumune has taught to both. But Masamune's blow is more effective and Rigel is losing consciousness for a moment. Masamune drops into the Rigel, but Unsai saves the puppy.

Masamune leaves the scene where the forces of Matheus fight against the forces of Ōu's warriors. He almost kills Kenshin, who had betrayed him. Masamune wounds Tsubakuro and fights for a while against Unsait and Genna. Weed will obviously let Masamune go but Masamune suddenly attacks the Ōu warriors. Yamabiko quickly guessed his grandfather's intentions, but Masamune managed to wound him badly.

Thereafter, Orion strikes Masamune Battogga for the Weed offense and despite Yamabiko's request that his brother should not be killed.

Badly wounded and trapped Masamune ends up suicide. He bites his own stomach, pulls the guts out and dies. After the death of Masamune, Sirius seeks his scarf and covers it with his body. 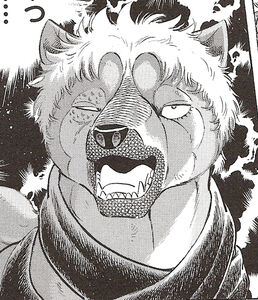 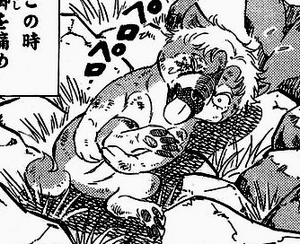 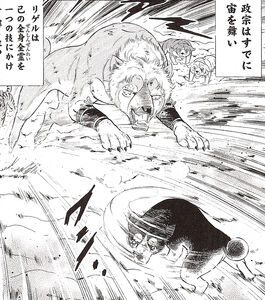 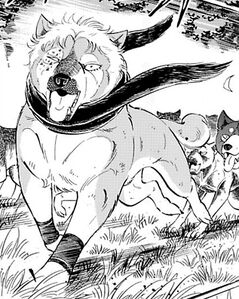 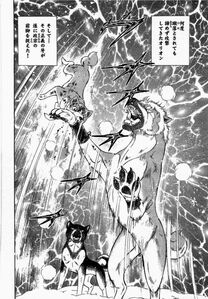 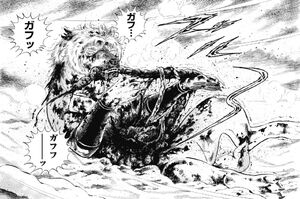 Retrieved from "https://villains.fandom.com/wiki/Masamune_Kurohabaki?oldid=2757910"
Community content is available under CC-BY-SA unless otherwise noted.