Conducting experiments with the Zecters.

Assassinate Souji Tendou.
Usurp control of ZECT.
Turn everyone on Earth into Worms and reign over the planet.

Masato Mishima is the main antagonist of Kamen Rider Kabuto. He is the second-in-command of ZECT who later allies with the Natives in their plot to turn everyone on Earth into Worms.

Mishima serves as assistant to ZECT HQ's leader, Riku Kagami. He has no sense of taste, and finishes eating by taking a supplement. He is the one who briefs the ZECT teams about the Worms. Despite often being suspect of his orders, Shuichi Tadokoro and Sou Yaguruma are forced to turn a blind eye to him due to his position in ZECT's hierarchy.

At one point, he uses the TheBee Zecter forcefully become Kamen Rider TheBee despite the TheBee Zecter's attempt to reject him. In episode 48, he assumed the form of Gryllus Worm using the pendants created by the Natives.

He was portrayed by Tomohisa Yuge.

In the past, Mishima kidnapped a young boy who would become Dark Kabuto and detained him within a ZECT facility, where he conducted numerous experiments on him to unlock the power of the Hyper Zecter and forcefully converted him into a Native Worm, taunting the boy by mockingly congratulating him for becoming a Native. Mishima also at some point detained Renge Takatori and forced her to eat nothing but boiled rice for many years.

Mishima later attempted to convince Daisuke Kazama to join ZECT, only for the Rider to refuse. In response, Mishima had Shun Kageyama kidnap Kazama's child companion Gon to blackmail him into fighting Kabuto.

With Tendou's continued interference in his plans, Mishima sends out Renge to pose as a cadet and get close to Tendou in order to assassinate him. However, after eating some of Tendou's cooking, Renge begins to grow close to Tendou and is eventually convinced by him to turn against Mishima, later assisting him in stealing the Hyper Zecter. In response, Mishima attempts to destroy the Hyper Zecter with the bomb, but the Zecter survives the explosion and manages to find its way to Tendou.

After Riku Kagami gives a public announcement revealing the existence of Worms to the world and prepares to disband ZECT following the defeat of the Worms, Mishima allies with Negishi and the Natives in their plot to turn all of humanity into Worms. He overthrows Riku Kagami as leader of ZECT and usurps his position. Mishima distributes Worm-detecting pendants created by the Natives to the population of Japan, accusing anyone who does not wear one of being a Worm in disguise, all while he and the Natives had secretly modified these pendants to convert their wearers into Native Worms upon the release of a certain signal.

Mishima later uses the Natives' pendants to transform into Gryllus Worm, the strongest Native, and take on Kamen Riders Kabuto and Gatack. He is defeated by Hyper Kabuto's and Gatack's Rider Kick and then destroyed by the meteorite explosion that obliterated the studio set.

Masato Mishima appears with a more minor role in the movie, being one of the members of ZECT's inner circle alongside Riku Kagami who has secretly sided with the Worms to construct the Jacob's Ladder station to allow the Next-Worms to invade. He later sends out Issei Kurosaki to stop Kabuto and Gatack when they board the station.

Kamen Rider TheBee was part of a group of reinforcement riders led by Akira Date/Kamen Rider Birth to aid the primary riders in defeating the Rock Great Leader. All the Kamen Riders got on their bikes and performed the All Rider Break attack which destroyed the Great Leader. Although there is no information on TheBee's human form, since all of the other users of the TheBee Zecter appear in their own separate Rider forms, this incarnation of TheBee could be Mishima, as he somehow appears to have been revived by unknown means.

The Gryllus Worm is one of Dai-Shocker's Great Commanders. During the final battle between the combined Rider and Super Sentai forces and the Shocker-Zangyack Alliance he takes on the Gokaigers. In the background of both aerial attack scenes, he is first seen fighting NinjaYellow, then ShinkenRed and DekaBlue. His human identity isn't made clear in the movie.

Gryllus Worm was one of Amadum's monsters in the world within the Magic Stone.

He only used the TheBee Zecter only for short period. In the episode of 48 of Kamen Rider Kabuto, he assume the form of the strongest Native Worm, Gryllus Worm. 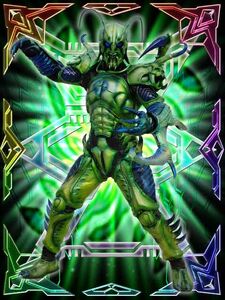