Become Prime Minister of Japan by any means necessary.

Destroy the Phantom Thieves (both failed).

Masayoshi Shido is the central antagonist of Persona 5, and Joker's archenemy. The seventh and final major target, Shido is the head of The Conspiracy, a powerful politician, and Goro Akechi's father. His belief that it is his god-given right to lead society and destroy any who dares cross him creates a Palace inside the Collective Unconscious, where he transforms into Samael, the demon of Pride.

He turns out to be at the center of a conspiracy to rig the election for Prime Minister in his favor, allowing him to put his highly draconian and ultra-nationalistic political beliefs into effect, uncaring of the misery this would cause to Japan in general. Shido's Palace is an enormous, multi-tiered cruise ship, which is imposed over the National Diet Building in the real world. His treasure in the Palace resembles a ship's steering wheel; in the real world, it manifests as his legislator's pin.

Shido started as a colleague of Sojiro Sakura, being a successful and ambitious politician who claimed that he would one day become Prime Minister of Japan, but nobody took his claim seriously. Years before the story, he had an affair with an unnamed woman, which conceived Goro Akechi. Shido later left his lover, leaving her to commit suicide once Akechi was born. Therefore, Shido was responsible for Akechi's start of darkness, just as he was responsible for the protagonist's start of heroism years later.

However, more than a decade later, Shido became a member of the National Diet and met a teenage Akechi, who gained his Persona after making a pact with Yaldabaoth, who was the main conductor behind Shido's later conspiracy connected to psychotic breakdown and mental shutdown. Akechi pretended to work for Shido and helped him to steal a Metaverse research project in an attempt to seek vengeance against his father, believing Shido has no knowledge of his own son. However, Shido had found out the truth all along, since he discovered that Akechi bore a physical resemblance to his mother, but Shido pretended to be oblivious, so that he could use Akechi as his pawn until the time was needed to depose Akechi as soon as Shido rose as the Prime Minister.

Using Akechi's mental shutdown ability as his tool, Shido murdered Wakaba Isshiki, a prominent cognitive psience researcher and Futaba Sakura's mother, before sending Futaba false information that defiled Wakaba, falsely claiming that she hated her daughter all along. Sojiro, who was a close friend to Wakaba and adopted Futaba as his own daughter, failed to expose Shido and was forced to retire and become the owner of his Cafe LeBlanc in order to protect Futaba. Throughout years, Sojiro silently listened to Shido making speeches about the nation's crisis, but reacted in apathy as he knew what kind of monster Shido truly was.

Throughout the years, Shido used Akechi and his ability to cause mental shutdown incidents, most notably the train derail that caused many people to die, causing a scandal that deposed the former Minister in charge of public safety, so that Shido could take his place. He used Principal Kobayakawa of Shujin Academy and is indirectly responsible for the sexual harassment of Suguru Kamoshida being concealed. He also used Ichiryusai Madarame (through his plagiarized artwork), Kunikazu Okumura (through his company's gain) and Junya Kaneshiro (through his underworld business) as his source of finance to run for Prime Minister, so that he could take charge into the country and start a rule with his iron fist. He even manipulated the SIU Director to push Sae Niijima into investigating the Phantom Thieves in an attempt to make her his unwitting pawn.

Combined to his dark influence on Akechi and Futaba's life, as well as being the one behind Akechi's involvement with the fake Medjed incident, Shido is doubtlessly the foremost figure behind every target of the Phantom Thieves before confronting him personally.

Confrontation with the Protagonist

One year before the start of the story, the protagonist met Shido when he was drunk, harassing a woman on the street. When Shido noticed the protagonist he threatened the latter not to get in trouble with him because of his status as a powerful politician and connection to the police. He lost his balance when the protagonist attempted to pull him from the woman. His forehead hit the corner and bled. Shido angrily accused the protagonist for the nonexistent violence and forced the woman to testify against the protagonist, causing the protagonist to be put on probation as a minor offender.

While waiting for the elevator to go back to the restaurant, Shido and his subordinates rudely shove the protagonist and Ryuji who are waiting in front of the elevator away, much to Ryuji's anger. When the protagonist and Ryuji protest that they were there first, Shido, as usual, threatens to use his connections to sue them, while angrily complaining about seeing teenagers appearing in the restaurant with pure irritations.

While Shido was speaking, the protagonist heard his voice and started to have a familiar feeling when he took the first glace at Shido as if he met this man before, just as Shido left and Ryuji complained about his rude behavior. This convinces the protagonist, Ryuji and Ann to continue their work as Phantom Thieves.

After framing the Phantom Thieves for the death of Principal Kobayakawa and Kunikazu Okumura due to the two's attempt of betrayal, Shido made the public to spite the Thieves and turn against them. Seeking this as an advantage to destroy the Thieves, Shido made Akechi to kill the protagonist via spying into the Phantom Thieves' team, while taking down the SIU Director to silence him.

However, while Shido succeeded in deposing the SIU Director, the other Thieves looked through their plots of murdering the Protagonist once Shadow Sae was defeated. Not only did they fake the protagonist's death, but they also managed to discover that Shido is the ringleader of the mental shutdown conspiracy, convincing a willingly redeemed Sae Niijima to join their side.

After Futaba revealed that she discovered Shido was the mastermind, Sae revealed to everyone that she firmly believed Shido is the mastermind as well, due to his rise of power occurred just in time when psychotic breakdown incidents happened, while Sojiro finally confessed that Shido was the murderer of Wakaba and the stealer of her research. Later, under his disguise, the protagonist encountered Shido and recognized him as the very same man that framed him, and he deduced from Shido's exclamation that he saw the Diet Building as a ship for him to control as its captain, and that ship is the form of his Palace.

As soon as the Thieves entered the Palace of Shido, they were shocked and enraged to find out that the whole nation of Japan was flooded around the ship, while confused at Akechi's reason of serving Shido. Shido's Palace was a clear view of his own delusions and complex, an enormous ship that sails on a flooded Japan (even probably the entire world), with Shido and his followers on the ship unscathed while other citizens would drown in the ocean, truly showing his uncaring nature to the nation and its people.

The Thieves managed to defeat five minions of Shido to get the letters of introductions they required to enter the Diet Building, right before they confronted Akechi and defeated him, but they start realizing Akechi was just another victim of Shido due to his parentage. After Akechi's defeat, Shadow Shido sent his own Cognitive Akechi to kill the real Akechi, revealing Akechi was nothing but his own puppet. Feeling horrified and guilty for his crimes, Akechi sacrificed himself to allow other the Thieves to escape, while expressing his last wish to make the Thieves change Shido's heart, a request that the Protagonist agreed to, much to Akechi's relief.

Once they discovered Shido's treasure, the Thieves then vowed to defeat Shido, realizing everyone connected to the incident was Shido's victim, even including Akechi. They immediately send a nationwide announcement to accuse Shido as a villain, which infuriated Shido and made him desperately try to stop the Thieves from changing his heart. When the Thieves confront Shido's Shadow in his Palace, without knowledge of his son's apparent death, he admits that he was going to kill Akechi anyway once he becomes Prime Minister because he knows too much, much to the Thieves' disgust. During the fight, he finally recognizes the protagonist as the student who interfered with him before. After the Shadow is defeated, Shido admits he was wrong for having the protagonist arrested, and vows to make amends upon returning to his real self.

His Treasure is his legislator's pin, which takes the form of a ship's wheel within his Palace, symbolizing his ambition to "steer" Japan in the direction he chooses. Despite his Shadow's apology to the Thieves, Shido, in reality, senses the change of his heart. His physician feeds him medicine to enter suspended animation, hoping to kill the gang in his Palace and stop his Treasure from being stolen. The plan fails as all Phantom Thieves successfully escape unscathed. Shido's aides send him to the hospital to avoid media coverage of his mental state. On the day of the announcement of Shido's landslide election victory, he openly confesses his crimes during the live conference. Sae Niijima is tasked with charging Shido.

Despite Shido's confession, however, the general public does not show support for the Phantom Thieves, but are rather more worried about the future of Japan without Shido leading the country. After Shido made his confession, his remaining allies commence an all-or-nothing plan to wipe out the Phantom Thieves and maintain their corrupt choke-hold over Japan. For this plan to work, Yaldabaoth directly influences the people of Tokyo to forget Shido's crimes and blame the entire debacle on the Thieves by manipulating the slothful nature within its citizens.

When the Phantom Thieves enter the Depths of Mementos to change the hearts of the now-distorted public, they encounter the Shadows of their previous targets including Shido. No longer arrogant or ambitious, Shido is now a broken man resigning himself to Yaldabaoth's control. His personality has changed to the point that he now prefers the vision Yaldabaoth has for Japan, saying it will be a far better country than what he had tried to build.

Fortunately, after Yaldabaoth is defeated and Mementos entirely erased, public opinion promptly turns against Shido and his allies, eventually bringing an end to the Conspiracy and its schemes. In spite of this, to prove Shido's guilt, the protagonist must turn himself in as a key witness considering the laws the Thieves had to break over their months of activity. Despite that, with help from the Thieves and their other allies, the woman who was first coerced into testifying against the protagonist is found and admits the truth of what happened with her and Shido.

With the prior testimony against the protagonist revoked, Sae succeeds in prosecuting Shido for his crimes and proves the protagonist's innocence, ending Shido's reign of terror once and for all. With the debt repaid and their fortunes fittingly reversed, the protagonist returns to Leblanc to his friends and the future once stolen from him as a free man while Shido presumably rots in prison for the rest of his life. 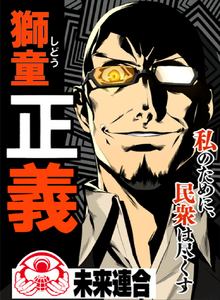 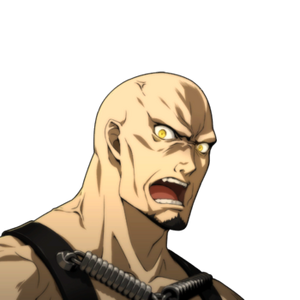 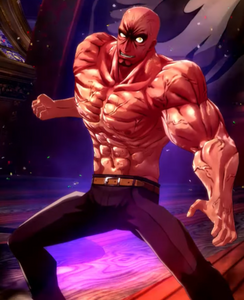 True Samael Masayoshi Shido
Add a photo to this gallery

Retrieved from "https://villains.fandom.com/wiki/Masayoshi_Shido?oldid=4187568"
Community content is available under CC-BY-SA unless otherwise noted.