Leader of the group of space pirates

Absorbing powers from others

Absorbing the powers of the Bunnera citizens.

Absorb all of Prince Bunston's powers, so that he can become the most powerful force in the entire galaxy (failed).

Mashtooth is the main antagonist of the DS video game The Legendary Starfy. He is the power-hungry leader of the group of greedy pirates who can absorb the powers of others. His goal is to absorb the power of the citizens of Bunnera, their prince Bunston in particular, in order to become the most powerful force in the galaxy.

At some point before the events of the game, Mashtooth invaded the planet Bunnera and started absorbing the power of the inhabitants known as Bunnerans, which are bunny-like creatures who have to ability to transform, in order to conquer the planet.

He particularly set his eyes on their prince, Bunston, due to being the most powerful and authoritative of the Bunnerans. He set his crew after Bunston, but the prince was fortunately able to escape using his ship. However, Mashtooth sent Snips, Ronk, and Papes (otherwise known as the Terrible Trio) after him. They were able to shot down his ship using their own, causing the ship to split into eight pieces. This sends Bunston crashing through Pufftop's roof (The kingdom of the main protagonist), which caused him to suffer amnesia.

Mashtooth is first seen in a cutscene, angry that Snips, Ronk, and Papes have still not captured Bunston. When one of his minions objected to their actions, stating that it is not nice, Mashtooth furiously punched him, sending him flying. He then gave a speech about his belief that strength is everything, and that once Bunston is his, he will become invincible.

Later, the Terrible Trio (beginning to have second thoughts about their actions after being healed by the protagonists) calls Mashtooth in hopes that they will change his mind, but this works to no avail. Mashtooth furiously said that he will give them a last chance, but if they failed, he will "squeeze them like a puff pastry".

Starfy finally comforts Mashtooth near the end of the game on planet Bunnera, who was waiting for Bunston's arrival. At first, Starfy and Bunston teamed up to form Monstar, but unfortunately for them, Mashtooth as protected by a force shield, causing them to lose to him at first.

However, while the force shield was able to protect Mashtooth from Monstar's attack, it was unable to protect him for Starfy's attacks alone, this forced Starfy to fight the power-hungry and oppressive tyrant alone. After a long and hard battle, Starfy seemingly defeated Mashtooth.

However, with their guard down, Mashtooth took this opportunity to finally absorb Bunston's power. First, he tried to absorb Bunston by sucking him through his nostrils, before just picking him and eating him. With Bunston in his belly, who transformed into the power Mega Mashtooth.

Starfy attempts to attack Mashtooth using his star spin, but this only hurts Bunston (who was still alive inside Mashtooth's stomach) while doing little to Mashtooth himself. Not wanting to hurt their friend, Starfy and his friend Moe remain helpless as Mashtooth attempts to finish them off.

Suddenly, the Terrible Trio appears and start attacking the authoritative and power-hungry pirate. This caused Mashtooth to barf out Bunston. With the encouragement of his friends, and now not having to worry about hurting Bunston, Starfy set out to fight Mega Mashtooth. The fight ends with Mashtooth sending the Bunnera moon at Starfy, which Starfy sends crashing back at him. destroying Mashtooth for good. With Mashtooth defeated, the stolen powers were returned to the Bunnerans, restoring them to perfect health.

Mashtooth is a red dragon-like creature with dark purple hair. He grows fat whenever he eats someone. His nostrils can also stretch big enough to fit in victims half of his size and victims go straight to his belly.

Mashtooth appears to have an arrogant and oppressive nature. He is a power-hungry, overconfident, manipulative and dictatorial tyrant who thinks power and strength is everything (which he states many times). He is shown to be a very cruel and relentless monster in battle as he attacks the inhabitants of Bunnera and stole their power just so he could rule the universe. He will crush all that defy him, even consuming some as snacks for his belly. For example, he sends a minion flying after questioning the continuance of their course of action. He is also shown to be a competitive brute when he strikes fear into his enemies as well as his minions since the Terrible Trio were scared about calling him and when minions tell him bad news they often say "please don't eat me", and "don't hurt me". 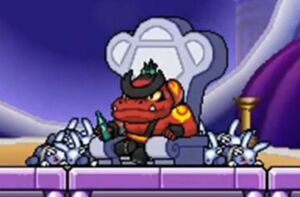 Mashtooth sitting on his throne. 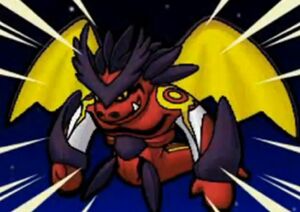 Mashtooth transforming into Mega Mashtooth.
Add a photo to this gallery

Retrieved from "https://villains.fandom.com/wiki/Mashtooth?oldid=3890720"
Community content is available under CC-BY-SA unless otherwise noted.