Beauty Inducement (only through makeup)

To bring "The Trashy Look" back in style forever (failed).

Delusional Vandal
Mask Scara is a one-time villain from the Cartoon Network original series, The Powerpuff Girls, appearing in the Season 6 episode "A Made Up Story".

She is a fallen fashion mogul, who vandalizes all billboards, posters, and statues, depicting a person's face, and puts grotesque, tacky makeup on them. More importantly, she does this to people, and makes it impossible for them to get their makeup off. This is all done in a desperate attempt to feel as though this trashy makeup style is still a popular trend.

She was voiced by and modeled after the late Phyllis Diller.

Mask Scara used to be a subtle woman named "Madame M.", who ran her own make-up business that made billions of dollars for inventing a style called "The Trashy Look", which involved women wearing overwhelming amount of make up, giving them big red lips, giant black eyelashes, and so much foundation, that the color of their original face was barely visible. This trend went on for a while, before it was overshadowed by "The Dull Look", the new trending style, which was literally just promoting the complete and total lack of makeup. This sent Madame M.'s profits plummeting, until her whole business crashed. Madame M., distraught by her life ending up in shambles, went completely evil by developing the new alter-ego of "Mask Scara". As Mask Scara, she would wear her trashy makeup, and use her spontaneously acquired superpowers to vandalize all people and things with the trashy look, so that technically, that style would be in again, and she could one again feel relevant, and bask in her former, but now long-gone glory.

In the episode "A Made Up Story", Mask Scara struck again, for the first time since the creation of The Powerpuff Girls. She covered Townsville in make up, and victimized both heroes and villains alike. Bubbles and Buttercup had both become victims of Mask Scara, but Blossom managed to keep herself high and dry, while she thought of a plan to stop her. Blossom was aware that the unveiling of The Mayor's colossal mural of himself would be taking place soon, and she knew that Mask Scara would strike there next. She awaited her arrival there, and sure enough, she showed up. The Powerpuff Girls fought with Mask Scara here, but to no success. Just then, Professor Utonium showed up, introducing his new invention. An antidote for the permanent make up, known as Calibrating, Oscillating, Lifting, Dermatological cream, or "C.O.L.D. Cream" for short. Buttercup and Bubbles fought over who gets to use it first, and the bottle of cold cream slipped out of their hands and went flying into Mask Scara's face. Mask Scara lost her own make up, and her magic as well. As such, all of the vandalism she caused had vanished, setting Townsville back to normal again. 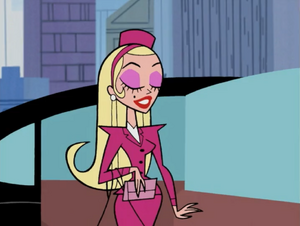 Mask Scara before her transition into the supervillain she is. 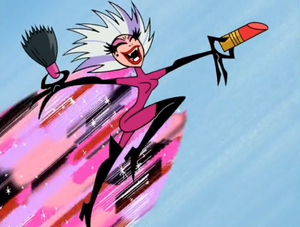 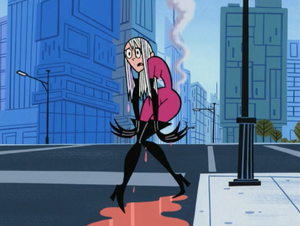 Mask Scara, after being defeated.
Add a photo to this gallery

Retrieved from "https://villains.fandom.com/wiki/Mask_Scara?oldid=3305110"
Community content is available under CC-BY-SA unless otherwise noted.