The Masked Woman is an antagonist from the 2011 horror film Hostel: Part III.

She was portrayed by Alicia Vela-Bailey.

The Masked Woman's real face has never been revealed in the movie. She has been only seen in the scene where Justin gets tortured & killed. She appears to be wearing some-kind of a leather-latex suit, while she is wearing some kind of an "alien" sort of mask on her face.

Justin, one of the friends which went to Las Vegas to have a good time, appeared to get ball-gagged inside of the torture room. While numerous clients stare at him suffering. He also appears to be cuffed on a chair so he can not move away. The room starts getting filled up with smoke, until the Masked Woman comes out from the smoke with a cross-bow.

Justin stares at her in fear not knowing what is going on, which escalates in the Masked Woman shooting Justin a few times, one of which was his crotch area. Once she was finished, she removed his ball-gag out from his mouth and tells Justin that everything will be okay, and then proceeds to shoot Justin more than once though his head, killling him. 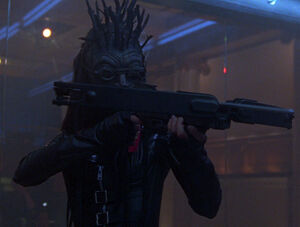 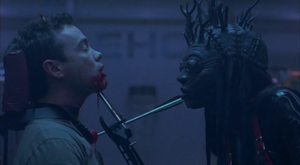 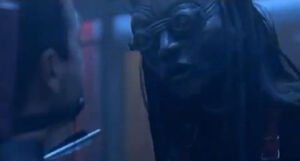