Leader of the Zero Numbers

Fuse Eve with Eden to unite every human within it and rule the world for eternity.

Mason Ordrosso is a character in the manga Black Cat and the Number XII of Chronos' elite brigade, the Chrono Numbers. Despite being neutral at worst in the manga, he was made the final villain of the anime adaptation. In this story, he is revealed to be the leader of the Zero Numbers, who enters the stage after the central villain Creed Diskenth has been defeated, planning to assimilate humanity and rule the world forever.

He was voiced by the late Rokurō Naya in the Japanese version, and the late Randy Tallman in the English version.

Mason's history was undergone several alterations of the manga to the anime adaptation, the two versions show a complete against-verse.

In both continuities, Mason is the oldest Chrono Number and fought in the gruelling war between Chronos and the Tao Masters of the continent of Yamto 25 years before the start of the story. He is one of the only three surviving Numbers, and the only one still alive when the story takes place.

While in the manga Mason remained a loyal and devoted Chrono Number, in the anime he secretely made an alliance with some Tao Masters and formed a plot to one day destroy Chronos and take over the world. He gained a power of Tao and pulled the strings from behind the scenes.

It is said that he worked with Creed, who had plans for world domination of his own, and his Apostles of the Star. Mason might have manipulated them, as two of the Apostles are in fact part of the Zero Numbers, but it eventually appears that Creed knew much more about his plans that he would have liked.

Mason's personality suffered alterations manga to anime adaptation. In the manga he is a faithful member of Chronos, always observant, careful, alert, and cautious. He appears to be sophisticated and regal, but also quite enthusiastic and cheerful.

This shows when he laughs in earnest during his talk with Belze, in which he tells him that he has every right to be worried about the Chrono Numbers fighting in Clarken Island, and ponders whether Creed, Chronos or Train will emerge victorious.

In the anime his personality is the complete opposite. He displays rather stereotypical villainous traits such as the overconfidence and the exaggerated power-craze. He is portrayed as very manipulative and cruel, hiding his treason from all of Chronos for two decades. He is not satisfied with immortality and world domination, desiring nothing short of absolute dominion of all; like Creed but even more ludicrous. He is also despicably conceited and arrogant, showing absolute scorn towards Chronos, the Apostles and the protagonists.

Mason claims to desire a world without conflict where all could be happy, and that humanity's fate is to be unified under his watch. But his actions speak louder than his words. He clearly craves power for the sake of power, and could not care any less about harmony.

Like any Chrono Number, Mason is a highly powerful warrior with perfect mastery of a type of weapon, wielding one made of the rare and indestructible Orichalcos metal. The manga does not display his weapon and fighting skills, but him still being on duty, and even on the front line, clearly shows that his age is no hindrance. The manga never shows him a with cane, as he does in the anime. (However, the anime makes clear that he does not need his cane to fight, perhaps being supported by his armor, or likely using it to pretend being weak.)

In the anime, his weapon is an Orichalcos armour, named Á Bao A Qu (after a creature from Malay legends, supposed to ride along people reaching for Nirvana), with two retractable blades over the hands. This not only allows him to fight, but also protects him from all attacks that does not target his head.

Finally, his connection to "Eden" resurrects him whenever he gets killed and vastly increases his powers and skills, making him more than a match even for Train, the world's best warrior. (It must be noted though that Train is shown considerably weaker in the anime than in the manga.)

Role in the Manga

Mason appears at the end of the manga, as the primary protagonist and former N°XIII Train Heartnet has just defeated Creed. He and N°II Belze Rochefort are overseeing the destruction of one of the Apostles of the Star's hideout, and amiably pondering about the resolution of the conflict.

Role in the Anime

After the battle of Clarken Island and the defeat of the Apostles of the Star, Mason leads the Zero Numbers to destroy Chronos. They later set out to capture Eve: a young bio-engineered girl with nanomachines-based powers, and one of the main protagonists.

It turns out that Mason had Doctor infiltrate the scientists working under the weapon dealer Torneo Rudman (the man who had Eve created) and lauch the "Eden" Project: the creation of a gigantic, sentient aircraft powered by a fusion of Tao and Nanomachines, meant to absorb and unify the consciousness of every human being in the world into itself.

It also turns out that Eve, initially thought to be created as a prototype super-soldier, was meant to serve as a consciousness for "Eden" to function. Mason and the Zero Numbers plan to link themselves to "Eden" to become immortal and rule the new world for all of eternity.

Doctor abducts Eve and links her to "Eden", starting the project, and the aircraft starts showering the world town after town with Tao-infused nanomachines. The nanomachines capture everyone they touch, sending their consciousness into the hive-mind of "Eden" and their body to be used as a fuel.

Train Heartnet and his partner Sven Vollfield set out to save Eve, soon joined by the Sweeper League (a group of powerful bounty-hunters who took part in the battle of Clarken Island), some redeemed Apostles of the Star and the remaining Chrono Numbers. Together, they fight off the Zero Numbers' horde of Tao-nanomachine monsters, and rescue Dr Tearyu Lunatic, Eve's projenitor and the chief-scientist of the "Eden" project.

With Tearyu's help, they manage to enter "Eden" and to kill the Zero Numbers, but "Eden" revives them. The group storm the control room where they are confronted by the Zero Numbers, who turn into gigantic monsters. While their allies stay there to deal with them, Train and Sven rush forward to save Eve before she gets completely assimilated by "Eden". (This would not only spell her doom and seal the fate of all of Eden's victims, but make "Eden" fully indestructible.)

Mason finally enters the fray and confronts the heroes. With both his Chrono Number's Orichalcos wepon and his power of Tao, Mason manages to overpower both Train and Sven, but they are saved by a redeemed Creed of all people, who take over the fight along with Echidna Parass. (Mason's battle with Train and Sven is extremely rushed and confusing, making how he bested them hard to understand.)

Train eventually reaches the center of "Eden" and manages to destroy its core, destroying the aircraft along with Mason and his Zero Numbers who were connected to it, and saving Eve and all the other captives. 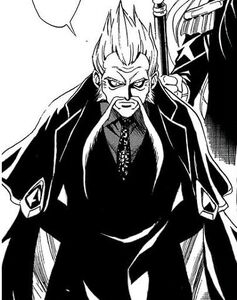 Mason in the manga 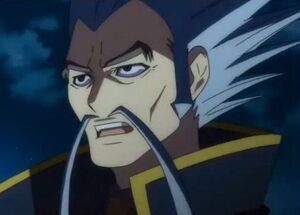 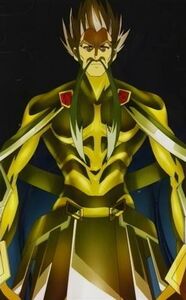 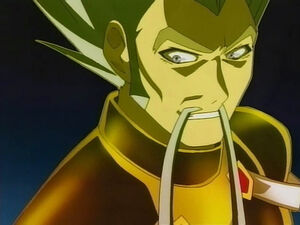 Mason's smug grin
Add a photo to this gallery
Retrieved from "https://villains.fandom.com/wiki/Mason_Ordrosso?oldid=4006460"
Community content is available under CC-BY-SA unless otherwise noted.