Feed Hannibal Lecter to his boars.

Kill anyone against him (both failed).

Mason Verger is the main antagonist of Thomas Harris's 1999 novel Hannibal and its 2001 film adaptation of the same name, which served as the sequel to the 1991 iconic Academy Award-winning film The Silence of the Lambs.

In the 2001 film, he was portrayed by Gary Oldman, who also portrayed Jean-Baptiste Emanuel Zorg in The Fifth Element, Drexl Spivey in True Romance, Egor Korshunov in Air Force One, Vladislav Dukhovich in The Hitman's Bodyguard, Norman Stansfield in Léon: The Professional, Lord Shen in Kung Fu Panda 2, Dreyfus in Dawn of the Planet of the Apes, Ruber in Quest For Camelot, Dr. Zachary Smith in Lost in Space, Count Dracula in Bram Stoker's Dracula, Carnegie in The Book of Eli, General Grawl in Planet 51 and Daniel Clarke in Call of Duty: Black Ops.

Mason Verger is a sexual sadist who indulged in a wide array of paraphilias, ranging from molesting children to torturing animals. He takes a particular delight into sexually abusing and raping his sister Margot, and tortures and kills many animals as well. Cunning and manipulative, he uses his money and political connections to evade going to prison for his crimes.

Though he is sadistic and remorseless, Mason is also highly masochistic and takes pleasure in hurting himself. He is shown performing autoerotic asphyxation prior to his disfigurement. After his disfigurement, Mason becomes obsessed with Lecter and devotes all his time, energy, and resources into planning a gruesome revenge.

In the flashbacks, Mason appeared as a young and slender man. However, after Lecter attacked him, Verger is left horrifically disfigured and confined to his bed for the rest of his life. He is missing his left eye, nose and his lips which has left him with a severe impediment. He has some use of one of his hands.

Verger is one of three surviving victims of Hannibal Lecter. He is the billionaire owner of a meat-packing company he inherited from his father, Molson. He is also a sadistic pedophile who enjoys raping and torturing children.

He also enjoys flavoring his martinis with children's tears, torturing animals and performing autoerotic asphyxiation. A self-proclaimed born-again Christian, he perverts his faith by committing such cruel acts as re-enacting the crucifixion of Jesus by nailing a migrant worker to a cross and leaving him to die.

He preserves his greatest cruelty for his twin sister Margot. He subjected her to extreme sexual abuse when they were teenagers, molesting and raping her habitually, but also subjecting her to other grotesque torments such as biting chunks out of her buttocks, dislocating her arm, and forcefully sodomizing her with a candy bar (which he called "taking the chocolate"). When their father disinherits her after she comes out as a lesbian, Mason uses the situation to extort sexual favors from her by threatening to cut her off financially if she disobeys him.

He is eventually arrested for "taking advantage" of children at a Christian camp that his father had started, but he uses his family's political connections to make sure he is sentenced to community service and counseling instead of prison time. Lecter is his court-appointed therapist. Coincidentally, Lecter had years earlier treated Margot for the abuse that she suffered at Mason's hands, and told her that it would be therapeutic to kill her brother.

Mason invites Lecter to his pied a tierre for their first session. Lecter gives him what Verger believed to be amyl nitrate and asks him to demonstrate autoerotic asphyxiation. In reality, Lecter gave him a highly potent cocktail of psychoactive drugs. Deliriously high, Mason hangs himself with a noose and crashes into a mirror. Lecter picks up a shard of broken glass and tells Mason to peel off his own face with it. Mason once again complies, and Lecter feeds the pieces of Mason's face to his dogs, Under Lecter's orders, Mason also eats his own nose. Finally, Lecter breaks Mason's neck with the noose and leaves him for dead. Mason survives, but is left a hideously disfigured quadriplegic.

After Lecter is arrested for committing a series of murders, Mason tries to make sure that he gets the death penalty, but Lecter is instead found insane and institutionalized. When Lecter escapes years later, Mason begins planning to feed him alive to a pack of omnivorous wild boars specially bred for this purpose. He becomes a hermit, rarely leaving his estate, Muskrat Farms, and has only his physician (and fellow sex offender) Cordell Doemling and Margot, who works as his bodyguard, for company. Margot hates Mason, but stays in his employ out of hope that he will donate sperm to her and her partner Judy, so they can conceive a child.

When Lecter is spotted in Italy, Mason tries to draw him out by discrediting the doctor's foil Clarice Starling, with help from her corrupt boss, Paul Krendler. He also bribes Italian detective Rinaldo Pazzi to bring Lecter in. Lecter kills Pazzi, however, and flees to the U.S. Mason's men eventually kidnap Lecter and Starling, and bring them to Muskrat Farms. Before Mason can enjoy his long-awaited revenge, however, Lecter escapes his bindings and convinces Margot to kill Mason. Margot sodomizes Mason with a cattle prod, causing him to ejaculate and provide her with sperm to make a baby, and then kills him by shoving his pet moray eel down his throat.

Difference between novel and film

In the film adaptation of Hannibal, the character of Margot Verger is omitted, and Mason's death is altered. In the film, Lecter convinces Cordell to throw his hated boss into the boar pen where Lecter is intended to die, promising to take the blame. Cordell does so, and the boars eat Mason alive. 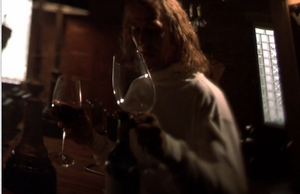 Mason prior to his disfigurment. 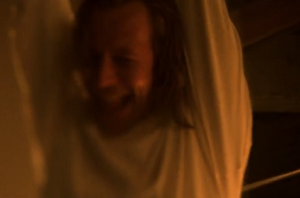 Mason hanging himself whilst under the influence of drugs. 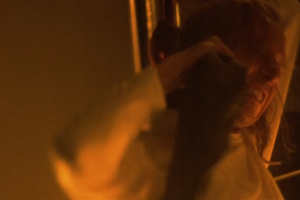 Mason beginning cutting off his face. 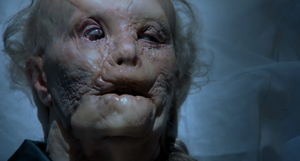 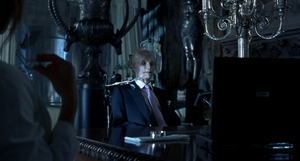 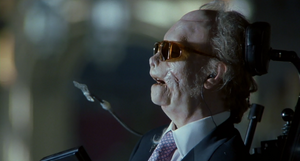 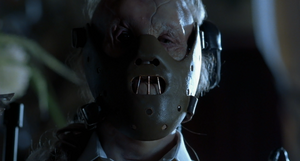 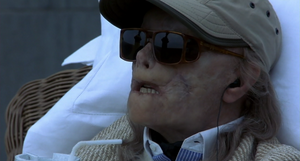 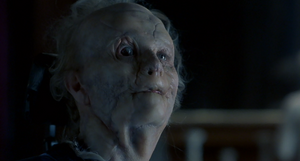 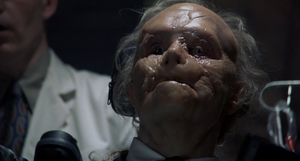 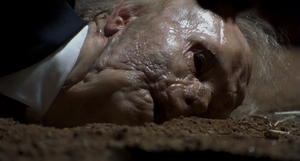 Verger about to be devoured by a herd of hungry boars.