Thugs
Masquerade Dopants are combatants used by Museum and antagonists in Kamen Rider W. Mass produced Masquerade Memories are distributed to their Gaia Memory salesmen for the purpose of producing more thugs to do their dirty work.

The Masquerade Dopants differ from other Dopants as they retain human form, wearing suits with masks that have a spine and rib cage design, resembling the bony design of the Dopant GaiaMemories and to an extension the Shocker Soldiers and all of their varients. Also unlike standard Dopants, they do not need a Living Connector to prevent negative side effects but they are much weaker and don't require a Maximum Drive to defeat; neither do they return to human form, for when defeated as they are literally destroyed.

Cell Medal recreations of the Masquerade Dopants appear as part of a Combatman Yummy army, the product of Shocker Combatman In Sendo's desire for like-minded allies to defeat the Kamen Riders, based on the grunts from past villainous groups who fought against Kamen Riders, whom Sendo refers to as the "past generation combatmen". They fight Kamen Rider OOO but are eventually all destroyed by Kamen Rider OOO Tajadol Combo's Magna Blaze Giga Scan.

Three Masquerade Dopants were  Amadum's monsters in the Magic Stone. They were sent as the 13 Rider Rings . However, tthe boy summoned Double and Fourze, who fought the henchmen. They defea the Masquerade Dopants in the city and destroyed a trio of Worms. 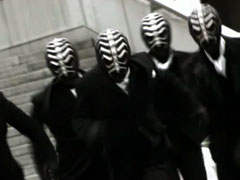 A horde of Masquerade Dopants.