Caring for his grandmother.

Steal back the Kuma and Televi Bottles to repay his debt to Kazumi.

Massugu Ubukata is a farm worker from Hokuto who worked for Kazumi Sawatari and the main antagonist of the Hyper Battle DVD special Kamen Rider Build: Birth! KumaTelevi!! VS Kamen Rider Grease!.

He was portrayed by Yuji Takao.

When his grandmother suffered a heart attack, Massugu attempted to take her to a hospital only to be blocked by Hokuto soldiers. However, Kazumi Sawatari saw their plight and beat up the soldiers so they could make it to the hospital. Thanks to Kazumi, Massugu's grandmother received treatment and was able to make a full recovery, causing Massugu to feel indebted to Kazumi for his help.

When Kazumi Sawatari became converted into Kamen Rider Grease by the Hokuto military and was to be sent Touto along with the Hokuto Three Crows, Massugu attempted join Kazumi as well so he could fight alongside him to repay his debt, but Kazumi declined his offer. Massugu also made a set of dog tags to give to them as lucky charms which Kazumi also rejected.

Despite this, Massugu followed Kazumi to Touto. After Kazumi relinquished his Kuma and Televi Fullbottles to Kamen Rider Cross-Z Charge, Massugu followed Touto Rider to nascita to retrieve. Entering the coffee shop, Massugu attempted to order a coffee but Ryuga, unprepared to deal with customers, provided him with a canned coffee instead, annoying Massugu.

Massugu later discovered Sento Kiryu was in possession of the Fullbottles Kazumi had given up and attempted to take Misora Isurugi hostage with a spoon so he could force Sento to give up the Fullbottles, but Sento did not take him seriously. Massugu then used a Smash Bottle to expose himself to Nebula Gas and transform into an Ice Smash. Sento transformed into Kamen Rider Build NinninComic Form to fight against the Smash, but the Ice Smash proved stronger than previous the Ice Smash Build had fought and beat the Rider down. Build thus swapped his transformation with the Kuma and Televi Fullbottoles and transformed into the new KumaTelevi Best Match. Using Kuma Halfbody, Build discovered that he could weaken the ice using honey before smashing it and defeating the Smash with KumaTelevi's Vortex Finish.

Grease then arrived, furious that Massugu had endangered himself, and attacked Build, thinking he had started the fight. Massugu attempted to assist Grease by grabbing Build's leg, causing Grease to cease attacking Build. Through KumaTelevi's newscaster Televi-san, Sento learned about Massugu's story and debt to Kazumi. Understanding Massugu's plight, Sento gave back the Fullbottles to Massugu and told he should return to Hokuto to support his grandmother before leaving. Massugu then handed the Fullbottles to Kazumi, who told Massugu to give him his dog tags because the jingling they made when he walked annoyed him before exiting the scene as well.

Massugu was among the workers on Kazumi's farm taken captive by Nariaki Utsumi to extort Kazumi into handing them the Pandora Box. He was later freed by Rogue when Kazumi refused to comply with the deal. Massugu would later reunite with Kazumi and tell him that a purple Kamen Rider was the one who freed the farm workers. 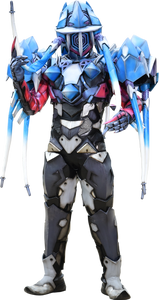