Hosting the Tournament of Elements.

Making noodles for his restaurant.

Steal Elemental Powers from the Elemental Masters, so that he can transform himself and his army into fake Anacondrai (temporarily succeeded).

Master Chen is a major antagonist in LEGO Ninjago: Masters of Spinjitzu.

He was the leader of the Anacondrai Cultists and a master of deception who was responsible for the Serpentine War. After he was exiled on an island for treason, Chen worked on a plan to steal the powers of the Elemental Masters and perform a spell that would turn him and his followers into Anacondrai. He is also Kai's arch-nemesis.

He was voiced by Ian James Corlett, who also voiced Skales in the same series.

Chen serves as the main antagonist of Season 4: Tournament of Elements, a cameo antagonist in Season 5: Possession and one of the six secondary antagonists of the TV special Day of the Departed. He is also the titular villainous protagonist of the non-canon Chen's Chair short minifilm series, as well as a minor antagonist in the 2015 non-canon videogame LEGO Dimensions.

When he was young, Chen grew up in vain when he was told he would amount to nothing, compared to the Elemental Masters, who were born with natural abilities.

Sometime long ago, Chen served as a mentor to Garmadon (who still had evil in his blood due to being bitten by the Great Devourer as a kid) and Clouse. One day, when Garmadon and Clouse were sparring, he made a wager that who ever won would become his right-hand and gain Lordship, so Garmadon cheated and won regardless, and was given the title "Lord Garmadon".

Later, Garmadon and Chen were discussing the rivalry between humanity and Serpentine, with Garmadon saying that there could be a truce. But Chen tells him to "Never Trust a Snake!". Chen then gave Garmadon a love letter written by Wu which was for Misako. Chen convinces Garmadon to change the letter to make it seem it came from him.

As he started the Tournament of Elements, he invited the Ninja and the descendant Elemental Masters to his island. However, his lieutenant Clouse always gave him the offer to first take care of the Ninja, as Chen refused to mess up the tournament. When he figured out the Ninja and the Elemental Masters started working together, he and Clouse decided to do whatever it took to break their alliance and their friendship with the Elemental Masters. When Chen calls Lloyd a cheater and conspirator in front of all Elemental Masters, they realize that he is one, and Clouse suggests him to let them go, so they can begin their plans. Chen then tells the Elemental Masters about the Staff of Elements just in order to further destroy their alliance with the Ninja. When Lloyd mentions the spell of transforming into Anacondrai that Clouse is going to cast, Clouse pretends to be innocent, which makes the alliance get broken even more. After Nya snuck into the island and stole Clouse's spellbook in the disguise of a kabuki servant, Chen was informed by Clouse about someone stealing the book, and working as a kabuki servant. Chen ordered a search for the intruder across the island, and when Nya was found out to be the spy, Clouse ran after her in the attempt to capture her. Chen then found out from his daughter Skylor about Cole and Zane trying to escape, and he got proud of her for the news. He then got the idea from Clouse to continue the tournament and hunt Nya, and to track her down so that he can capture her. Clouse suggests him to force Skylor fight Kai, and when he listens to Clouse, Skylor ended up victorious and imprisoned Kai for Chen. Chen then stole all the elemental powers, got Kai (who was pretending to work for him and Clouse) against Lloyd and almost unleashed the spell, until Kai broke the staff with Skylor's help. Chen then nabbed his daughter and pretended to apologize to her. However, Clouse's idea that Chen got from was foiled when Chen stupidly told her about his plot. Then, Skylor understands that Chen is manipulating her, and she escapes her imprisonment and rides a hover, then she flies away on it. Chen tries to speed up to her hover, just so he can recapture her. Chen. As Clouse and Chen chased her on the Condrai Copter, Clouse gets distracted by Garmadon, and gets banished into the Cursed Realm after he opened a portal to the realm itself in a fight with his arch-rival, thus leaving Chen without his right-hand man.

Final Battle and Banishment to the Cursed Realm

As soon as Kapau and Chope read the spell from Clouse's spellbook, he and his army (with the exception of Clouse, who was banished), Skylor, and Garmadon turn into fake Anacondrai. Then, Chen sent his Anacondrai minions to find Pythor, so that they can use his essence to ensure that the transformation spell is permanent. When Chen and his army crosses the border of the Corridor of Elders, Pythor decides to affiliate himself with the Ninja and aid them by releasing the spirits of the Anacondrai Generals from the Cursed Realm. Garmadon decides to banishes himself, just so he will be able to defeat Chen with the help of the spirits of Arcturus and his fellow generals. After Garmadon was banished, Arcturus and his comrades were released and Chen got cursed alongside his goons, getting surprised because his plot didn't involve being cursed. On the way into the portal, he regrets his actions towards Skylor, but doesn't truly redeem himself, and in a desperate plea, he yells at Skylor to save him. When he already got pushed completely into the portal, the portal closed itself by magic rules.

In the next season, he appears imprisoned by the Preeminent in the Cursed Realm (her stomach), but when he sees Lloyd running past him, he tells Clouse that he saw him. However, Clouse, obsessed with his own escape, states he is seeing things again. Chen, along with the Anacondrai Cultists (except for Clouse, who escapes) and Garmadon, later perishes in the Cursed Realm's destruction.

He returns resurrected by Sensei Yang in Day of The Departed, and tries to kill Kai and Nya. However, he is later killed by the latter, and sent back to the Departed Realm.

Chen is pitiful, cruel, pretentious, delusional, self-centered, cheating, egotistical, oppressive, and sadistic, but above all, a ruthless liar who believes the very concept of peace to be mundane and the idea of war more enticing, showing his warmongering tendencies. Having been told that he would amount to nothing special when growing up, he would start to believe that without power, he is worthless, suggesting a fundamental inferiority complex. Since then, he would become obsessed with gaining as much power as he could ever since, in addition to adopting a "survival-of-the-fittest" mindset when he began to hold the belief that Ninjago deserves to be ruled by the most powerful.

He is also a master of manipulation and deception, most notably when he managed to orchestrate the First Serpentine War by turning the Human race and the Serpentine against one another by lying to one side that the other will attack them first. Despite these characteristics, he tends to behave in an immature and temperamental manner (characteristics he gained following his exile after the war), as he is shown to constantly throw tantrums when things don't go his way, such as during the Thunderblade event when Lloyd won and he was exposed as the cheater or during the Battle at the Corridor of Elders where he saw the rebuilt Destiny's Bounty arrive with the tide being turned against him. He is extremely eccentric, which is evident by when he plays with his throne's button features throughout the Tournament of Elements.

Additionally, he is presented as a coward, which is evidenced by when he was fleeing for his life when the spirits of the Anacondrai Generals were released from the Cursed Realm and started banishing his army to the latter, and he even expected his daughter Skylor to save him, but remained oblivious to the fact he stole her elemental power for his own selfish gain and kidnapped her for betraying him, showing his self-entitlement and hypocrisy.

He even is exhibited to be culturally insensitive and a heartless defiler, as he used the symbolism of the Anacondrai, even after betraying both human and Serpentine by igniting the war that drove both sides to battle each other almost to the point of near-extinction, and espoused their ideology of "only one can remain", adding insult to injury. He appears to be extremely shameless and immodest in this sacrilege, as he begged the spirits of the Anacondrai generals to spare him even though he was the one who instigated both wars, which caused them to be banished to the Cursed Realm, and then used stolen elemental powers to transform himself and his followers into pseudo-Anacondrai, even going as far as to claim himself to be on the same side as them. 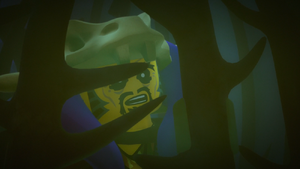 Chen in the Cursed Realm. 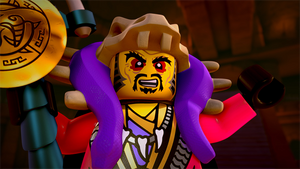 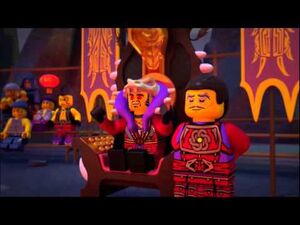 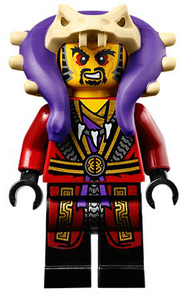 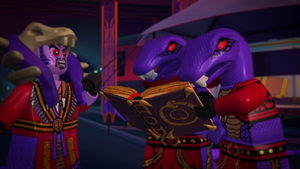 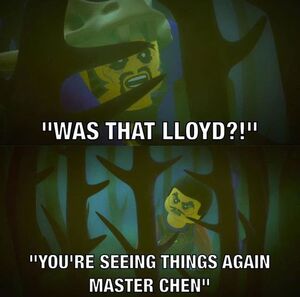 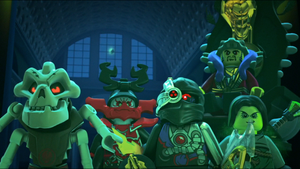 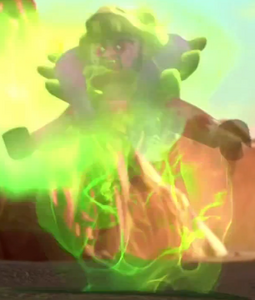 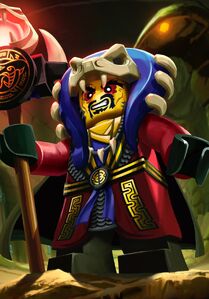 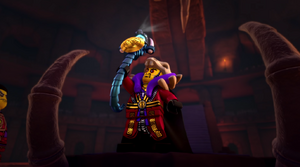 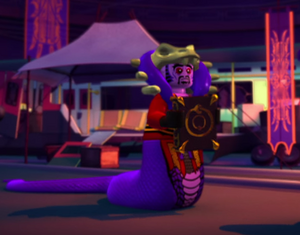