Convince Cortana to break up with Todd (failed)

Master Chief is one of the two main protagonists of Arby 'n' The Chief alongside Arbiter. He is an action figure of Master Chief from the Halo games that somehow has sentience. While Master Chief was never truly a hero, he becomes significantly more villainous in season 7, especially after joining Eugene's Clan.

He is voiced by the Microsoft Sam voice synthesizer.

After being berated by Cortana when he messed up a game of Scrabble, Chief sought to get revenge on her. He kidnapped her and placed her in the oven, though he made sure to unplug it so that it would not kill her. However, Arbiter plugged it back in, not knowing what Chief intended to do.

Master Chief then demanded Cortana to apologize for what she said, lest he turns the oven on. When Cortana refused, he turned the oven on to scare her, not knowing it would work. After realizing that the oven was on, Chief tried to turn it off, but it was too late and Cortana was melted to death.

Chief then disposed of what was left of Cortana by flushing it down the toilet. He then buried her stand in a storage box. Seeing that Greg had witnessed what he had done, Chief convinced him not to tell Arbiter, saying it would only cause more trouble. Instead, he had Greg tell Arbiter that Cortana mailed herself away to a children's charity.

Chief later joined Eugene's Clan alongside Arbiter. Eugene Black took an instant liking to Chief, believing him to be one of the greatest trolls he had ever encountered. After hearing that Colin had developed a new fragban hack, Chief was eager to use it but Arbiter insisted they not and the two left. However, Arbiter changed his mind and Chief and he assisted Eugene and his followers in their fragbanning spree.

However, Chief began having visions of Cortana, apparently as a result of his guilt. Cortana encouraged Chief to become a better person, but the Chief didn't listen and stayed hostile to her. Chief attempted to show Cortana how cool his "friend" Colin was and joined a server he was on. However, Chief witnessed Colin coerce a 9-year old into joining a private IRC chat. This caused Chief to begin having second thoughts about being a part of Eugene's Clan.

Chief told Arbiter about what he had seen, though Arbiter at first didn't listen. Fortunately, Arbiter changed his mind after seeing Eugene and his friends bully a kid and reduce him to tears. Chief later tracked down the kid Colin had coerced and convinced him not to trust Colin, and to give him the link to Colin's chat. Chief then went on with Arbiter and coerced Colin into a meetup while posing as a kid. The two then contacted the police about Colin's pedophilia and forwarded them the evidence.

The two were later invited by Eugene to talk with him in his private IRC server, but it was just a ruse and the two were fragbanned by Eugene and his clan to prevent them from interfering with their efforts. Thus, Chief and Arbiter used their owner Jon's credit card to order a new Xbox. They then equipped their avatars with the fragban 2.0 hack and went to stop Eugene's Clan from causing any more havoc. They succeeded in banning Tyler and Colin, but before they could stop Eugene he shot himself in real life.

Master Chief was later visited by Cortana again, who told him that Colin and Tyler both got what they deserved and that Eugene's suicide was his fault. She also told him to be a good friend to Arbiter before leaving.

Chief and Arbiter's friendship grew significantly in the week that passed, with Chief opening up to old-school Nintendo games. However, Arbiter discovered Cortana's stand and eventually learned the truth about what happened, prompting him to chase after Chief. This ended with Chief being thrown against a wall and broken into several pieces. Arbiter attempted to fix Chief, but could only reattach his arms and visor.

After overhearing Arbiter talk about committing suicide, Chief set the stove to explode. It is unknown if he perished in the following explosion. 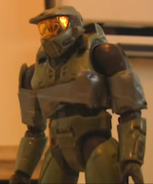 Master Chief as he originally appeared in Halo: Reach