Dark powers depending on which form it has

Defeat those who confront it.

The Master Core resembles a Smash Ball. It at first has a golden hue, but as time goes on, its body turns red, hinting at some dark power that it is going to launch.

The Master Giant form is a giant black humanoid. It has a cyan spot on the face. This serves as a mouth.

The Master Beast form is a scorpion-like creature. It has a mouth whose insides are red.

The Master Sabres form resembles a large sword and manipulates four smaller swords. It is the only form that resembles a non-living object.

The Master Shadow form is depicted to be a black blob in official artwork. In game, though, it copies the player's character, gear, weapons, all.

When it loses its Master Shadow form, the Master Core hides inside the Master Fortress. It is a giant, black castle that resembles a digestive system in a way. Green areas line the fortress's walls. These regions are dangerous, dealing 25 damage to their victim. Anyone at 100% or higher who comes into contact with these so-called danger zones will teleport past the blast lines and die instantly.

The Master Core also has a transitioning form called the Swarm. It uses this to change between its forms. It is composed of a black mass of particles, which hide what it really is.

When the player is playing Classic Mode and managed to reach the Final Destination, on a certain difficulty, they can choose to confront both Master Hand and Crazy Hand at the same time. On at least 5.1 difficulty, after the two Hands are dealt seventy HP worth of damage, Master Hand tears open to reveal the shadowy core inside covered by the Swarm called Master Core with Crazy Hand disappearing. The Master Core is a formless entity that attacks its opponents in a variety of forms. Once all of its forms are defeated, the Core will revert back to its true form; as a ball. When it is in its Core form, the player has to KO it before it unleashes its one-hit KO Off Waves. Once the player knocks the Core itself into the blast line, Master Core is defeated.

A grab-type ace class. Its ability lowers the user's speed. Its spirit battle is a stamina battle on the Final Destination against a giant Donkey Kong with super armor, plus Bob-ombs will occasionally drop from the sky. This spirit is the only form of Master Core found in "Adventure Mode: World the Light".

A shield-type ace class. Its ability increases the user's weight. Its spirit battle is a stamina battle on the Final Destination against a giant Ridley who can deal damage when falling, occasionally summoning the Chain Chomp Assist Trophy.

An attack-type ace class. Its ability increases attacks from swords. Its spirit battle is a stamina battle on the Final Destination against four Clouds who have increased power to their weapons and speed, but have reduced weight.

A neutral-type legendary class. It can be summoned using the cores of Master Giant, Beast, and Edges. Although it is very powerful in terms of offense and defense as well as three support slots, its ability causes the user to start the match at 30% damage.

Each form of the Master Core has various abilities.

Master Giant is a massive humanoid creature and Master Core's first form, only fought on Intensity 7.0 or higher on the Wii U version, and 7.5 or higher on the 3DS version. It attacks by firing energy balls from its forehead and grabbing players with its hands or its forehead. Master Core is also capable of moving the stage vertically to try and get the player hit by its other attacks.

Master Beast is a massive beast with a large maw and Master Core's second form. It can be fought after Master Giant's defeat, or as the first form from Intensity 6.0 to 6.9 (Wii U) or 7.4 (3DS). It attacks the player by firing spikes out of the ground, chomp at them from the background with its large jaws, and do a full-body stomp that causes the stage to tilt for a few seconds. It also generates electrical discharges as well.

Master Edges (Master Sabres in the PAL versions) is a group of five swords and Master Core's third form. It appears after Master Beast's defeat, or as the first form from Intensity 5.1 to 5.9. It can attack with either homing attacks, or perform slashing attacks. They can even generate energy slashes that can be absorbed (by Ness and Lucas)..

Master Shadow is Master Core's fourth form that manifests as a shadowy copy of its opponent, fought after Master Edges' defeat. It is slightly bigger than its opponent, and its attacks are slightly stronger. However, as the Core takes damage, it gets smaller and weaker. Uniquely, it can also be defeated by getting knocked into the blast zone.

Master Fortress is Master Core's ultimate form, exclusive to the Wii U version. It can only be fought in single-player mode on Intensity 8.0 onwards after Master Shadow's defeat. It is a massive fortress filled with enemies, acid, and four cores that must be destroyed within five minutes to defeat it. When the Fortress appears, the player receives a heart to replenish their health, and the timer is reset. It is very similar to the Smash Run on the 3DS version and the Race to the Finish bonus game from pre-Brawl.

After all of its forms are defeated, the Master Core reveals its true form: a stationary, vulnerable orb that rests at the center of Final Destination. To defeat the Core for good, players must rack up damage within 45 seconds, then send it flying past the blast zone to finish it off. 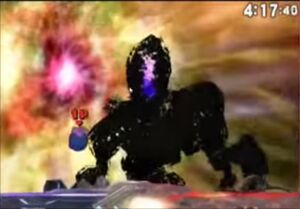 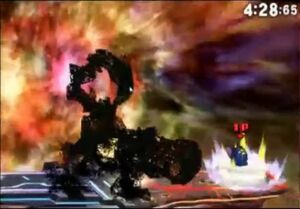 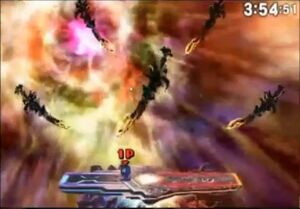 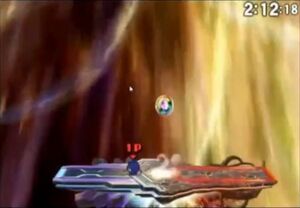 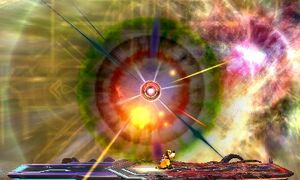