Guiding guests through his mansion (post-death).

Guide guests through his mansion (post-death).

Master William Gracey, also known as the Ghost Host, is one of the main antagonists in the popular Disney Parks ride The Haunted Mansion, which appears in Disneyland in California, Walt Disney World in Florida, and Tokyo Disneyland. He is the host of the attraction and one of the most prominent characters in its history.

In the ride, he was voiced by the late Paul Frees, who also voiced several of the pirates on the Pirates of the Caribbean ride, Burgermeister Meisterburger in Santa Claus is Comin' to Town, and Boris Badenov in The Rocky and Bullwinkle Show. For the Haunted Mansion Holiday overlay, he was voiced by Corey Burton. In the HalloWishes firework show, he was voiced by Kevin Michael Richardson. In the 2003 live action film adaptation, he was played by Nathaniel Parker. In the Tokyo Disneyland version, he was voiced by Teichiro Hori.

Much of Gracey's history was revealed in the comic book series The Haunted Mansion by Slave Labor Graphics, which ran for seven issues from 2006 to 2007.

William Gracey was born into a wealthy family, which owned the mansion. However, he wanted more money and a more adventurous lifesyle, so he took up being a pirate. During a mutiny that he lead, he took the life of the ship's gunrunner and became the captain, under the alias of Captain Blood. However, his adventures ended costing the lives of much of his crew.

After acquiring what he believed was a reasonable amount of money, it is suggested that his father passed away and left the mansion to him. Gracey retired his life of piracy and went on to inherent the mansion, where he flaunted his wealth and held large parties. Presumably at one of these parties, he met and fell in love with Emily de Claire. The two courted for only a short time before professing their love and becoming engaged.

After his engagement, Gracey began experiencing paranormal occurrences within the mansion, which he took to be ghostly. He hired the traveling medium Madame Leota to look into these events and to drive any spirits that may be there out. However, as Leota was doing this, she fell in love with Gracey and made several advances towards him. However, loyal to his fiancée, he refused her. Angry, Leota continued to contact the spirits, eventually contacting Gracey's former crew and captain, who reveal to her Gracey's dark past. Leota used this knowledge to conspire with the ghosts, who she summoned on Gracey and de Claire's wedding night. The ghosts approached Emily before the wedding, telling her of Gracey's crimes while scaring her to death.

Infuriated and vengeful, Gracey tracked Leota down, who was performing a séance to draw more ghosts to the mansion. Gracey found her and snapped her neck, instantly killing her and causing her to become one of the other ghosts in the mansion. After three months of grieving for his lost love, Gracey hung himself from the rafters above the Stretching Room, joining the rest of the undead in his mansion.

He was buried in the cemetery in the front of the mansion. It is also hinted that he may be narrating the comic series.

After his death, Gracey became omnipresent within the mansion, able to oversee all of the activity within. Despite his tragic life and death, he keeps a hospitable and even mischievous air about him, welcoming in "foolish mortals" and jokingly threatening them throughout the ride. He seems to have embraced his position as the undead master of the house, toying with guests and even laughing at the subject of his own suicide when he shows off his hanging corpse.

A tombstone with his name can be seen as guests are arriving, and a portrait of him can be seen in the foyer, with the image growing older and older until it rots into a skeleton. It is also believed that many of the portraits in the mansion, such as in the Corridor of Doors, are of him.

Gracey surprisingly does not appear as a major character in the Haunted Mansion miniseries of the 2016 comic book series Disney Kingdoms by Marvel Comics. However, his hanging corpse is encountered by protagonist Danny Crowe as he escapes Captain Bartholomew Gore.

The Ghost Host appears as a guide for the player in Kinect Disneyland Adventures.

In the 2003 live action film, William Gracey is reimagined as Edward Gracey, who lost his bride-to-be to an apparent suicide and thus hung himself for it. Years later, he tries to get his bride's reincarnation, Sara Evers, to remember her past life and fall in love with him so he may break the curse of the mansion that occurred when he died. However, here he is interpreted as a tragic and misguided hero with no truly evil intentions, and later helps in revealing the film's true villain.

In Walt Disney World, the Ghost Host is the host of the HalloWishes firework and light show during Mickey's Not-So-Scary Halloween Party, where he meets with other villains like Ursula and Jafar. In the Disneyland versions, called Halloween Screams!, the show is hosted by Jack Skellington.

The Ghost Host also makes minor appearances in other Halloween and villain shows and events, usually introducing or narrating.

William Gracey is a polite and generally kind gentleman, though he does have his limits and a temper when provoked. While a murderous and cutthroat pirate, he was also capable of great amounts of love, which he showed to his bride-to-be. Even after killing himself as a result of her death, he still maintained his sophisticated and charming personality in death, though he did go a bit mad and embraced the scary ghost he now was. 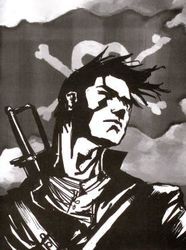 Gracey, in life, as Captain Blood. 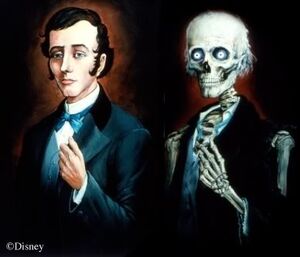 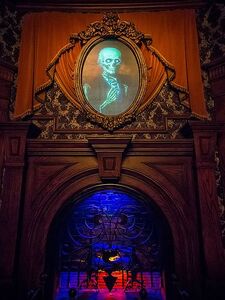 Gracey on a pin. 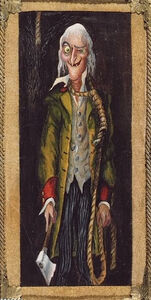 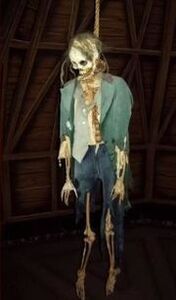 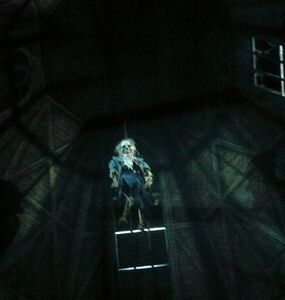 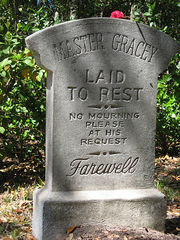 Master Edward Gracey in the 2003 film.
Add a photo to this gallery 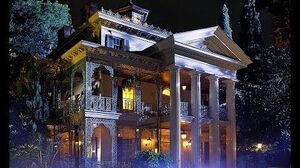 Retrieved from "https://villains.fandom.com/wiki/Master_Gracey?oldid=3935284"
Community content is available under CC-BY-SA unless otherwise noted.