Creator of the Smash Bros. universe
Owner of the Trophies
False Leader of the Subspace Army
Minion of Galeem

Defeat all who challenge him.

Master Hand (in Japanese: マスターハンド, Master Hand), also known as "The Hand", is the central villain of the Super Smash Bros. series and a supporting protagonist of World of Light. He is a mysterious entity who created the Smash Bros. universe who seeks to beat all who challenge him. He also appears as the final boss of Classic Mode in every game in the series.

Master Hand first appears in the opening cutscene of the game, where he takes plush dolls of two random characters and places them on a table. After setting up the objects around them, he counts to three and snaps his fingers, changing the table into the Peach's Castle stage and bringing the dolls to life.

Master Hand later appears as the final boss of the 1P Game. He attacks the player with slaps, punches, and flicks, and must be defeated by depleting his 300 hit points that must be depleted. Once all of his hit points have been depleted, he explodes while floating away into the background, along with the screen fading to white then fade to pitch black.

Afterwards, the player's character returns to their plush doll form. As the camera zooms out, the screen suddenly transitions to black, and the sound of a closing door plays.

Master Hand once again serves as the final boss of Classic Mode. He has a few more moves than he had in the original, and his hit points depend on the difficulty. On normal difficulty or higher, once Master Hand health is reduced by half, Crazy Hand joins in. In the event matches, both Master Hand and Crazy Hand are the enemies of "Event 50: Final Destination Match". He can also be playable as a glitch.

In the Subspace Emissary of Super Smash Bros. Brawl, Master Hand appeared to be the main antagonist for most of the story and commanded two of the main villains, Bowser and Ganondorf. However, he was being controlled by Tabuu. When Tabuu turned Ganondorf into a trophy, Master Hand's chains were broken and he attacked Tabuu, who easily defeated Master Hand. It is unknown if he was killed or simply injured, however as he appeared in later games he presumably survived or was revived.

In Classic Mode of Super Smash Bros. for the Wii U and 3DS, the player can choose to confront either Master Hand, or Master Hand partnering with Crazy Hand on Intensity 3.0 and higher. In Intensity 5.1 and higher, when they lose a good portion of their health, Crazy Hand disappears, and Master Hand bursts open to reveal Master Core. In the Wii U version of the game, he and Crazy Hand run their own mode called "Special Orders", in which they award the player if he or she successfully completes an Order. In Master Orders, Master Hand grants the player an reward based on their success on a single order. In Crazy Orders, if the player completes twenty orders or more, they will face off against Master Hand partnering with Crazy Hand. If the player wins, they will keep all of the rewards.

Master Hand returns one of the bosses that the player may encounter at the end of Classic Mode. He appears solo in some fighter campaigns while in others, he may be paired up with Crazy Hand. In total, Master Hand appears at the end of 44 fighters' campaigns.

In the new adventure mode "World of Light", a swarm of Master Hands are the minions of Galeem. In the opening cinematic, the Master Hands break open to reveal balls of light, which are absorbed by Galeem to create lasers that destroy all of the fighters except Kirby. Master Hands also appear in the mode's overworld map, creating hazards that block off pathways. One is also fought before the player can fight Galeem. However, these Master Hands are replicas of the original Master Hand who has been held captive by Galeem, much like the fighters. He and Crazy Hand are found in the final map if the balance of light and dark are not overwhelming each other. Only by freeing him and Crazy Hand from Galeem and Dharkon's control will they assist the fighters in the final battle, with Master Hand fighting off a horde of Galeem and Dharkon's fighter clones.

After his first appearance in Super Smash Bros., Master Hand appears in some of the Kirby games, such as Kirby and the Amazing Mirror, where he and Crazy Hand are the bosses of Level 9, "Candy Constellation". 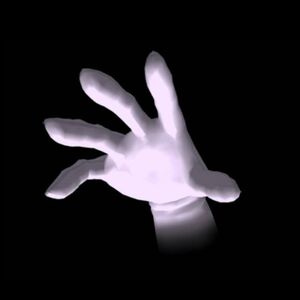 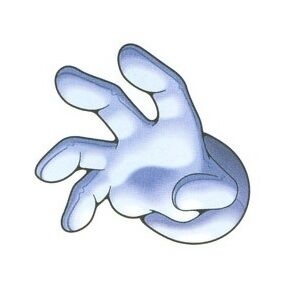 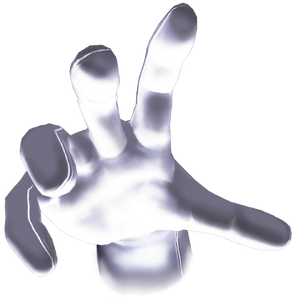 Master Hand as seen in Super Smash Bros. for Wii U and 3Ds. 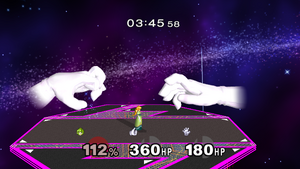 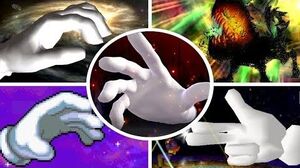 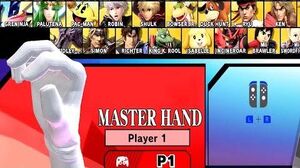 Retrieved from "https://villains.fandom.com/wiki/Master_Hand?oldid=2967299"
Community content is available under CC-BY-SA unless otherwise noted.