Guiding intelligence behind the Sentinels

Annihilate all mutants (at first)

Master Mold is a major antagonist in the X-Men franchise, published by Marvel comics. He is a giant leader of the mutant-hunting Sentinel robots, and is one of the major opponents to Xavier's dream of a human/mutant coexistence. Eventually, Master Mold turned on it's creators, becoming a threat to both humans and mutants.

Master Mold was created by Bolivar Trask to build an army of Mk I Sentinels to control the mutant population. However, this version was damaged when the Sentinel Headquarters was destroyed by the X-Men.

After Trask's death, the government of the United States put the Sentinel operation under the command of a Stephen Lang, a mutant-hating bigot who began reconstructing Sentinels with Trask's notes for his own goals. The Inner Circle of the Hellfire Club provided him with funds, not knowing that he wanted to kill all the mutants. Lang rebuilt the Master Mold, but did not use it.

During a battle against the X-Men, they destroyed the space station where Lang and the Sentinels were. Lang was lobotomized, but his memory-engrams were printed in Master Mold's computers. Thus, Master Mold suddenly believed that it was Lang himself.

The damaged body of Master Mold fell into the sea, off the coast of Alaska. Using its reconstruction facilities, the wreckage from an oil platform and sunken ships, Master Mold was again complete and detected X-Factor leader Cyclops in Anchorage, looking for his missing wife and children. Master Mold attacked him, but Cyclops tricked him into shooting gas storage tanks. The resulting explosion destroyed Master Mold's body again, but its brain module survived.

Somehow, Master Mold reached Muir Island and mind-controlled Moira MacTaggart. He then made her create the Retribution Virus, which stopped mutants from using their powers, and then killed them. However, MacTaggart's lover Banshee noticed something wrong and called Cyclops for help. Cyclops went to Muir Island. Master Mold tried to kill Cyclops twice, but failed.

Master Mold infected Banshee and a mutant girl with the virus, and then captured them. Cyclops tried to stop Master Mold's robots from taking them away, but was then defeated. However, he managed to rescue MacTaggart from the mind control. MacTaggart then tried to research for a cure, but Muir Island was then invaded by Master Mold's robots, which were led by an special robot, Conscience, which was programmed with Lang's memory-engrams and a skill to feel emotions. MacTaggart, Cyclops and his ally, Callisto, were defeated by the robots, infected with the virus (except for MacTaggart), and taken to Master Mold.

But Master Mold and the Conscience discovered that the virus had mutated and also killed normal humans. Master Mold insisted on using it anyhow, assuming that a small number of normal Humans would survive. These could be controlled to avoid the birth of new mutants. However, Conscience, being emotional, decided that it would be unfair. Conscience apparently destroyed Master Mold, and later itself, to avoid the use of the virus.

Somehow, Master Mold survived and then fought Power Pack and the X-Men, before merging with the advanced Sentinel Nimrod and being forced into the Siege Perilous.

As a robot, Master Mold is immune to poisons, sickness and mind attacks. He can also survive underwater or without air. His hull provides him with protection. His brain module can be detached and repair themselves, building a new body providing that they find enough metal; anyone touching the brain module suffers electric damage.

Being a Sentinel, he has all the weapons of Mk I Sentinels and Mk III Sentinels. With Lang's memory-engrams, Master Mold is an expert in Electronics and Robotics, constructing different robots to prove it. 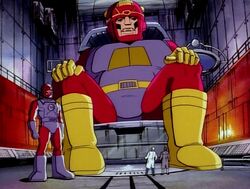 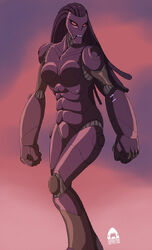 Master Mold in Wolverine and the X-Men 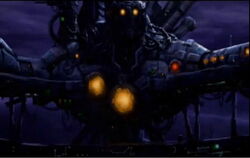 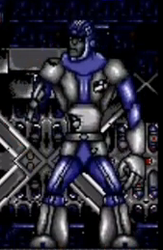