Cup and member of the Aqua Teen.

Unlike the other two food items, Frylock, an uptight super intelligent box of fries and Meatwad, a dimwitted, yet lovable ball of meat, Shake is a rude, selfish, lazy, narcissistic (In earlier episodes, he believed he was the leader) yet moronic milkshake. He often likes to torture Meatwad for his amusement and annoys Frylock to no end.

Even Oglethorpe and Emory, the two idiotic Plutonians find Shake annoying. Shake's own stupidity has caused damage to the city they live in, their own house, to himself and even to the whole planet, and yet he never learns from his mistakes. He is often worse than some of the villains the Aqua Teens have encountered.

It's hinted that he may also be dumber than Meatwad as Meatwad has outwitted him on occasion and even gotten revenge on Shake as well. Shake has an unusual ability to make anything he throws explode. He is also terrified of vampires and suicidal action figures. 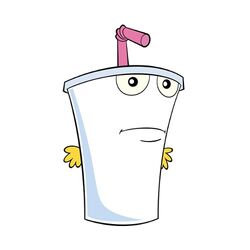 Retrieved from "https://villains.fandom.com/wiki/Master_Shake?oldid=1195046"
Community content is available under CC-BY-SA unless otherwise noted.