Ruler of the M-51 Galaxy

Claim the Zeo Crystal and absorb its powers.

Destroy the Power Rangers.
Rule the universe (all failed).

Master Vile is the father of both Rita Repulsa and Rito Revolto, the ruler of the M-51 Galaxy, and one of the main antagonists in Season 3 (with Lord Zedd) from Mighty Morphin Power Rangers.

The intergalactic sorcerer Master Vile came to the moon in search of the powerful Zeo Crystal and was successful after he created the Blue Globbor monster. He captured the Rangers' zords and the crystal and threw an End of the World party in Ernie's Juice Bar. Vile later engaged the Rangers as a giant along with his Globbor monster and managed to survive the finishing attacks of the Ninja and Shogun Megafalconzords, though he still retreated. But Vile thought of this as nothing but a minor setback and decided to stay on the moon. He later sent Dischordia, an ally of his, to take control of the Rangers' minds, but she was defeated and destroyed. Finally Vile used a device called the Orb of Doom, which he used to turn back time and revert the Power Rangers to helpless children. He then sent down a troop of monsters led by his general, Professor Longnose, only for them to be defeated by the Aquitian Power Rangers. Vile had had enough and threw a tantrum, before leaving for the M51 Galaxy where he said evil always won.

Later after the Machine Empire drove Rita and Zedd out of the moon, she contacted Vile since they needed somewhere to stay. He agreed to let them stay with him despite the fact Zedd would be with her. Master Vile later appeared at the meeting of the United Alliance of Evil on the Cimmerian Planet, but he didn't take part in the universal invasion, though he was most likely destroyed or purified by Zordon's energy wave.

Vile is an extremely powerful sorcerer which his two children Rita and Rito gained their powers from, and can create monsters by spitting eggs out of his mouth. He could also teleport and fire energy blasts out of his scepter. 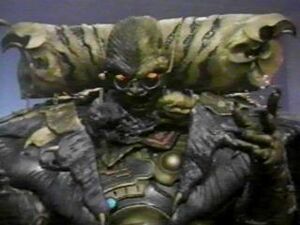 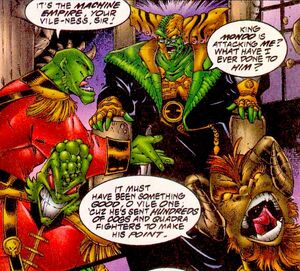 Retrieved from "https://villains.fandom.com/wiki/Master_Vile?oldid=3735955"
Community content is available under CC-BY-SA unless otherwise noted.