Sending Nighlocks to the mortal world.

Raise the Sanzu river by spreading misery across the mortal realm and drown the Earth, so that he can be free.

Conquer the humans.
Destroy the Power Rangers (all failed).

Master Xandred is the main antagonist of Power Rangers Samurai and Power Rangers Super Samurai. He is the archenemy of Jayden Shiba, the Red Samurai Ranger.

He was voiced by Jeff Szusterman.

Master Xandred is the overlord of the Nighloks. He is the primary adversary of the Samurai Rangers. He comes from the Netherworld and lives on a ship floating on the Sanzu River. It is revealed that he takes large doses of medicine for his frequent headaches often causing him to fall asleep for long periods of time. He becomes angry easily, especially if his henchman are insubordinate or speak out of turn.

When Arachnitor tries to usurp him, Xandred transforms him into a mindless mutant, due to Xandred having gained increased powers. He also has an intense hatred for Deker, since Deker intervened in one of Master Xandred's plans (which also involved the current Red Samurai Ranger that he even burned Dayu's harmonium due to her failure to destroy Deker. Xandred makes an alliance with Serrator.

Xandred learns of Serrator's treachery so he returns to the human world to gain back Dayu's Harmonium, only to dry out severely, due to being so far away from the Sanzu River. Octoroo was able to save him and bring him back to the ship. Master Xandred is currently recharging at the bottom of the Sanzu River. In "The Master Returns", Xandred was also able to fix Dayu's Harmonium, using one of his one own leg scales.

After a lengthy period of recuperation, Xandred eventually returned and faced the Samurai Rangers now led by the true Red Ranger, Lauren. Running into a wounded Dayu, he got an idea when she reminded him she was half-human and absorbed her. He then faced the Samurai Rangers while Lauren drew the sealing symbol. Despite his best effort to stop her, the symbol was completed and used.

However, while it caused massive damage, it did not manage to seal him as expected since Dayu's humanity had protected him from the symbol's power. Also, Xandred was no longer in danger of drying out and planned his takeover of the human world. He then defeated the Rangers and wounded Lauren.

When the Sanzu flood waters overflowed, Xandred released him army of Moogers to lay waste to Panorama City. The Samurai Rangers, led by Jayden Shiba once again, took on and defeated the Moogers before facing Xandred. After significantly weakening him with Shiba fire power, Jayden defeated him with the Shogun armor.

However, Xandred transformed into his Mega Monster form and the Rangers called on the Gigazord to fight him. As the Rangers attempted to get close enough to use a final blow filled with symbol power, Xandred blasted away the zords one by one until only the Samurai Megazord remained which managed to succeed and strike Xandred with a fatal blow. However, Xandred unsuccessfully tried to take the Rangers with him by grabbing the Megazord and boasting, before he was destroyed, that the Nighloks would rise again someday. He was then consumed in a massive explosion.

Xandred is extremely cruel, ruthless, arrogant, obstreperous and quick to enrage. He hates humans and wants nothing more than to make them suffer. He is also prone to explosive and violent outbursts, lashing out at enemy and ally alike. He is also quite rash when angry, leaving the Sanzu to personally destroy Serrator for deceiving him even though he would dry out instantly. However, he can also be patient and respectful to his servants that do their job of raising the level of the Sanzu River. Despite his cruelty, he can have a humane and compassionate side, as when he killed and absorbed Dayu, he tells her to "go to him [her husband, Deker]", seemingly sensing her long-standing agony because of Serrator. That was ruined, however, when he tells his servant Octoroo that she has served her purpose after throwing her dress in the river. 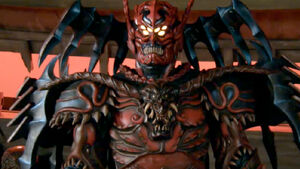 Xandred's evil grin, as he plans to use the traitorous Arachnitor to create more despair. 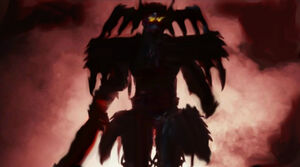 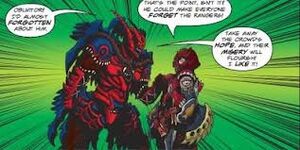 Xandred's death and explosion.
Add a photo to this gallery

Retrieved from "https://villains.fandom.com/wiki/Master_Xandred?oldid=4251142"
Community content is available under CC-BY-SA unless otherwise noted.