Master Zik is the overarching antagonist of Sonic: Lost World. He is a a member of the Deadly Six as well as the founder and teacher and possible adoptive father to Zavok, and had named him as leader of the Deadly Six and became his advisor and voice of wisdom when in doubt.

He was voiced by Kirk Thornton in English and Mugihito in Japanese.

After the Deadly Six betray Dr. Eggman, Master Zik steps up to fight Sonic, demonstrating powerful skill on Zazz and Zomom while saying the peaceful days of tending his guarden will have to wait. Sonic fights him twice and defeats him. He is the third to fight Sonic.

Again, Zik is the third to fight Sonic on Lava Mountain, attacking alongside Zazz and Zomom. Sonic defeats him and he explodes in a puff of smoke.

Master Zik is a blue Zeti, and the smallest of the Deadly Six by far. His head and body are indistinguishable and are of a spherical shape, with small limbs. Only Master Zik's head is sky blue, while the rest of his body is black. He appears as if he is wearing clothing, with a torn up hem around his waist and his wrists. His short black legs end with two blue claws, with a third claw on each heel. Unlike the other Zeti, Master Zik does not appear to have a tail. Master Zik has five fingers on each sky blue hand, each finger tipped with a blue nail.

Master Zik appears to be very elderly, due to the wrinkles across his forehead and lips. Master Zik has a long white moustache which reaches down to his feet. He has a pair of very short horns on his head, which are colored in black and yellow rings. He is largely bald sans for a long strand of white hair. Master Zik's sclera are yellow with purple irises, while he has blue eyelids and black under-eyes. Master Zik carries a wooden staff that is taller than he is, which ends in a inward swirl at the top.

Master Zik is very wise, and apparently hates disrespect, saying that Sonic should learn to be respectful (though this may be due to Sonic going against the Deadly Six), though he normally takes it easy. 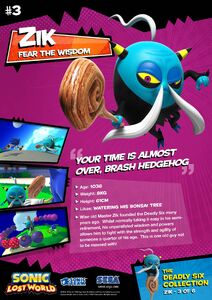 Zik in the manual of Sonic: Lost World.